Ryan Scott Hall hosts the Amateur Hour every Sunday at 6:30 p.m. and also writes "Start me up", a weekly column on the upcoming opponent. This week: New York Giants.

Share All sharing options for: Start me up: New York Giants bring 0-3 record into Arrowhead to face unbeaten KC Chiefs

In the realm of strange statistics, the 2013 New York Giants are setting the bar pretty high. Through the first three weeks of the season, the football Gods have not been kind to a team that is traditionally very disciplined and extremely well-coached by Tom Coughlin.

The Giants haven't finished below 8-8 in a decade ... but they haven't started 0-3 since 1996. I've come to realize that our modern day opinion of the Giants is skewed by their two Super Bowl wins since 2007. Did you know that they've also missed the playoffs three of the last four seasons?

Listen: I love statistics ... Sometimes though, stats don't tell the whole story. Last season for example, the Giants finished sixth in scoring offense and 12th in scoring defense but went 9-7 and missed the playoffs. 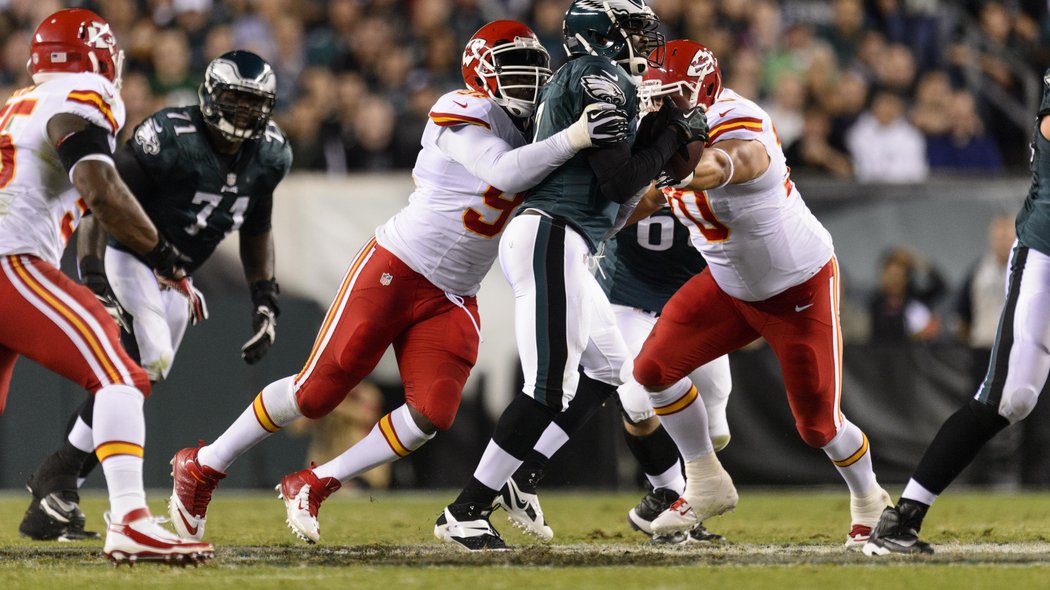 Ryan Scott Hall and His Dirkness host the Amateur Hour podcast every Sunday at 6:30 p.m. The link above will take you to the archives.

As for this year's team, they're ... man, they're a mess. It's comical. Eli Manning has thrown eight picks already and the Giants are -9 overall in turnover differential. They're the worst team in the league rushing the football at 44 yards per game. Context: Alex Smith trails the New York Giants by only 19 rushing yards after three games.

If you think that's bad, take a look at that defense: three sacks in three weeks and they are allowing 38 POINTS PER GAME. I mean... how do... what the?

Perhaps we need to look at this team for who they are rather than what they've been.

Defensively, the Giants are nowhere near as imposing as we remember. That pass rush everyone was terrified of no longer exists - Osi Umenyiora and Chris Canty are gone, Justin Tuck got old, Mathias Kiwanuka never turned the corner and Jason Pierre-Paul might as well be on the back of a milk carton. Their defensive tackles are a smorgasbord of familiar names ... from five years ago. Cullen Jenkins? Shaun Rogers? Mike Patterson? Sources tell me Jerry Reese tried to contact John Henderson, Marcus Stroud and Tommie Harris this offseason as well.

Defensively, the Giants are nowhere near as imposing as we remember.

I pride myself on at least knowing most of the names of players on every team but I can only name two of the five linebackers on this Giants roster. Keith Rivers was a huge bust for the Bengals and hasn't exactly improved upon that. Mark Herzlich is a great story but he hasn't been a great contributor thus far ... and I honestly have no idea who Spencer Paysinger, Allen Bradford and Jacquian Williams are. No offense or anything to those guys.

Their secondary has some talent in guys like Corey Webster (who's hurt), Prince Amukamara, Aaron Ross and Antrel Rolle but if the pass rush isn't clicking (which it's not) and the linebackers aren't helping in zone (which they aren't), you're basically gonna be stuck covering guys until they get open.

Offensively, New York is really having trouble up front. They will potentially be missing all three starters on the interior (**paging Dontari Poe**) and their rookie RT Justin Pugh (**paging Justin Houston**) has given up the most pressures in the league after three games.

Offensively, New York is really having trouble up front.

Eli needs time to throw. The Giants have very talented receivers in Victor Cruz, Hakeem Nicks and Rueben Randle and Kevin Gilbride's offense thrives on late-developing routes. However, if the Carolina game was any indication (five sacks in the FIRST QUARTER of a 38-0 shellacking), their gameplan will have to change in Kansas City. Clearly they can't seem to counter with the ground game either, despite re-signing Brandon Jacobs and giving former first rounder David Wilson plenty of opportunities. I would look for the Giants to throw some quick, short passes in hopes of moving the chains.

How to defend the Giants offense: Relentless pass rush

The Chiefs have been downright abysmal at getting to the QB ever since Jared Allen was traded, so I understand this is a new concept for us. As mentioned, Justin Houston will face yet another rookie right tackle this week. I think it's safe to assume he will be in the running to eclipse double-digit sacks on Sunday given that he already has 7.5 on the year. Tamba will be matched-up against Will Beatty, an above-average veteran that will win his share of battles, but Hali should certainly have some success as well.

The Chiefs defensive line is (quietly) playing outstanding, so if the Giants are indeed missing all three interior starters due to injury, it could be a really long day for Eli.

How to attack the Giants defense: "That's. MY. JAM."

This is a relatively common phrase associated with Jamaal Charles. We're all frustrated that Andy seems to avoid running the ball until the fourth quarter, but I'm going to try and come to terms with it as early in the season as possible because I highly doubt much is going to change. How does one accept the fact that the New Chiefs refuse to run downhill early in games?

I'm kidding but I'm not. Andy hasn't really gotten the screen-game going yet and I'm not sure why ... it was a staple in Philadelphia. NEWSFLASH: It's still a throw, bro! I'm trying to appease you, here. This should be acceptable offensive play calling early in games!

On a serious note - Dwayne Bowe is my favorite player on the team. I named one of my cats after him. [Editor's note by Joel: Can confirm a cat named Dwayne.] Obviously there's a bit of a bias on my part, but don't you think it's about damn time Wayne got some attention? The man is barely being targeted. This shall not go unmentioned until he has a big game.

Key Advantages for the Chiefs 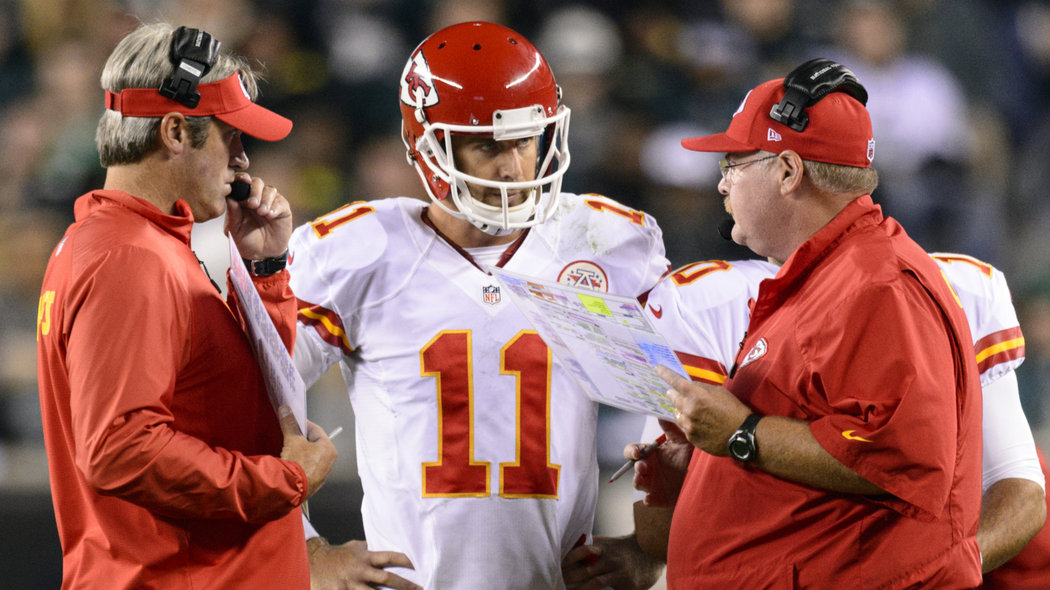 1. Run defense - New York has had some major struggles trying to get the ground game going so they've been abandoning it early. I'm hoping they stick with it for a few series, get shut down and allow the Chiefs grab an early lead. If you can make the Giants one-dimensional like they have been so far this year, the Chiefs should be able to pin their ears back and prevent Eli from having a big day throwing the ball.

2. Rest / preparation - Thanks to the Thursday night game, the Chiefs were given a few extra days to (hopefully) get healthy and put together their offensive and defensive game plans ... which brings me to my final point:

3. Another NFC East foe - When we started the year, this three-week stretch of NFC East competition looked like a brutal test right out of the gate. That certainly hasn't been the case so far but how much that has to do with Andy Reid's familiarity with these teams is unknown. Frankly, I think it's played a major factor and that should continue this week.

Key Advantages for the Giants

1. Element of surprise - Normally, overlooking the Giants would seem impossible. They've been such a formidable opponent for years, but this team looks nothing like we're used to. I realize it's a bit of a stretch on my part, but I fear that some of the Chiefs players may look at this game as a gimme due to how poorly New York has started the season.

2. Law of averages - How can they be this bad? Again, not an actual advantage ... but sheesh man, remember all the stats we started the article with? If the Giants just play average football in all three phases, they should be able to keep it close at Arrowhead.

Even below-average teams don't start the season 0-4, right? This Giants team is perfectly capable of coming into Arrowhead and winning.

3. Nothing to lose - I get it ... I still haven't really made a football point. Let's be honest though: if you look at how each team has fared in 2013, do you see anything that points to the Giants being a superior team to the Chiefs? Of course not -- and that terrifies me. Tom Coughlin is a good coach. The Giants have some excellent players. Even below-average teams don't start the season 0-4, right? This team is perfectly capable of coming into Arrowhead and winning. I saw the word "desperate" quoted from Giants players in like four different articles. I bet they come to play on Sunday.

When everything seems to align in your favor, you better take care of business. The Chiefs are at home, they're well-rested and they've played brilliantly to start the season. It would be a huge letdown if the Chiefs drop a game to what has been, statistically, the worst team in the NFL this year.

Problem is, unless you're the 2012 Chiefs, professional teams usually find a way to compete week-in and week-out. Aren't the Giants are too good to be performing this poorly?

Andy Reid, OC Doug Pederson DC Bob Sutton and ST coach Dave Toub all have their units playing a very sound, very methodical brand of football. If the Chiefs continue to keep mistakes to a minimum, this should not be a difficult game to win.