Danny Parkins and Carrington Harrison had an hour of radio on 610 Sports yesterday that you would enjoy: All DT, all the time. They brought former Chiefs Neil Smith, Deron Cherry, Rich Baldwinger, Danan Hughes, Kevin Lockett and Bill Maas onto the air to talk about Derrick Thomas.

NFL Network's "Derrick Thomas: A Football Life" debuted last night and it was as good as everyone thought it would be. One of my favorite parts of the this show actually doesn't have anything to do with the show itself. It's all the memories that people are bringing back up in light of the show this week.

Danny and C-Dot over at 610 Sports had some must-listen radio for those Chiefs fans who remember the life and times of Derrick Thomas. Here is a link to the podcast where they brought on a bunch of former Chiefs.

I pulled out quotes from each of these guys when they were asked where they were when DT was in the accident.

Neil Smith: 'I was on vacation' 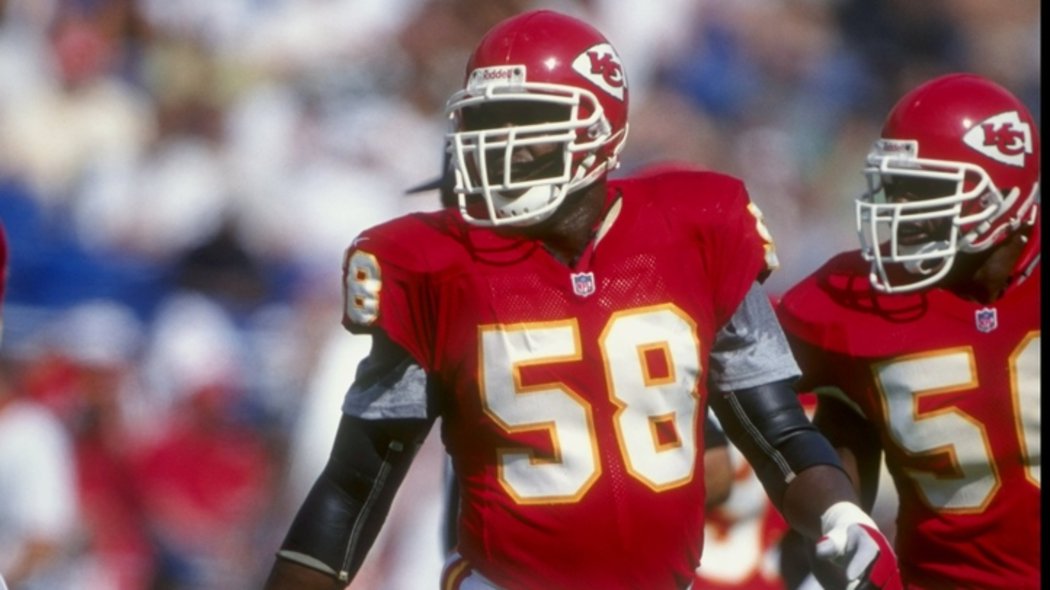 Old-school pictures of one of the greatest ever.

I was on vacation at the time with my family in Denver. When I got the call from one of the mothers saying he was in a car accident. I was like OK. My first question was how bad was it and she said, 'I don't know but it's pretty bad'. So it kinda prepared myself as I was trying to get out there but It stormed so bad [that night]. When I got there I kinda realized that it was really serious then because it had hit the news airwaves.

Deron Cherry: 'I was sitting at home'

I was actually sitting at home watching the game on TV, the playoff games. Then I think there was some breaking news that Derrick was in an accident and it was a rollover accident. It was kinda confusing as to who got hurt, how many people were in the car. I know they were talking about him being on his way to the airport and that was it.

Like most people definitely totally shocked by what had happened because we knew the conditions that day were pretty bad anyway. Most people were probably at home.

Rich Baldinger: 'I was at work'

I was at work and was involved with an overseas business deal and was on a conference call. I remember just hearing on the radio in the background there was an accident and of course Derrick's name was mentioned. To this day even when it comes back to me it's hard to talk about.

I remember it was snowing and cold outside.

In my four years I was with Derrick you develop a relationship and the guy was such a good person it's hard today to go back to that moment. I remember it was snowing and cold outside. You just get that feeling again of coldness around your body when you talk about losing someone like Derrick Thomas in your life.

Danan Hughes: 'I was here in Kansas City'

I had actually retired in 1999 so I didn't play that season so I was actually here in Kansas City. Just started working in the mortgage business but I had stayed around football. I believe I was told. I had visited him at Liberty hospital after the accident. But I was home when his death was announced.

Kevin Lockett: 'I was in my condo'

I can actually remember I was in my condo and my phone started ringing and buzzing. I'm getting all these calls. The very first person who contacted me was our fullback Donnell Bennett. I got a chance to speak with Donnell and he was asking me if I had heard some shocking news about Derrick being in a tragic accident.

He was asking me if I had heard some shocking news about Derrick.

At that time it was all speculation. Everyone was making rampant calls. and after talking with Tony Richardson and Lamonte Winston, who was our director of player development, it became confirmed he was in a tragic accident.

Bill Maas 'I was coming back from work'

I was coming back from, working sidelines at the AFC playoff game out in Denver at the time. I think it was Denver. I was coming back and I heard about it when I got back in town. The initial thing was car wreck, and we knew about the death of his friend. You didn't know what to expect. You heard it was bad conditions and then it came out that he was paralyzed. That was really just ... it hits athletes harder because of the things we do with our body. We can't fathom doing that, taking away our legs.