All the focus is on the "Big Three" of Justin Houston, Dontari Poe, and Tamba Hali. But Tyson Jackson is getting it done for the Kansas City Chiefs.

There are a lot of reasons the Chiefs defense is playing some scary-good football.  Most of those reasons come attached to names.

Dontari Poe: Too big, too strong, and too athletic to be contained by one offensive lineman.

Tamba Hali: Too good at handfighting and too relentless to be kept from the QB without help.

Justin Houston: Too... much.  Everything.

Eric Berry: Too fast to the ball, too good in coverage (15.3 QB rating when thrown at), too versatile to prevent from hurting your offense.

Sean Smith: Too physical in coverage for WRs to deal with (30.8 QB rating allowed when thrown at).

I could go on (Kendrick Lewis has played well, Dunta Robinson has been an upgrade over what we had last year, Mike DeVito has been very solid, Akeem Jordan has been much better than anticipated...), but instead it's time to take a look at the player who isn't getting quite as much credit for the Chiefs defensive success.

You knew this was coming.

Tyson Jackson is just. Too. Strong. And he's been a gigantic part of the Chiefs defensive success this season.

As always, his run defense has been excellent.  You don't run at TJax and Houston (unless you're LeSean McCoy and can teleport around the line when there aren't any holes, but that's a whole different story).  Part of me wondered how TJax would do as a run defender in our new, more aggressive system.  I'm happy to say he's doing just fine.  He doesn't give ground and he doesn't allow holes.

Prior to Mike Vick and Shady doing all sorts of Mike Vick and Shady stuff on Thursday, the Chiefs run defense was giving up less than 3 yards per carry.  Obviously, Vick and Shady changed that, but that was mostly a result of a few big plays that other teams can't duplicate (I now rank Shady as 2a or 2b as far as running backs go in the NFL.  He's that good).

Of course, run defense isn't an issue with TJax.  Even his harshest critics have long admitted he's a solid run defender (those who don't admit that are basically wild-eyed lunatics and should have things thrown at them).  No, the complaint about TJax has always been the same.

"He doesn't contribute against the pass. In today's league that makes him a liability."

I've heard this over and over the last few years.  Never mind the fact that he had some success last year when put in a position to do so.  Never mind how clear it was that he's too strong for individual OL to handle.  Nope, that was the popular belief among ESPN talking heads, so that's how it is.

Only now is the tide starting to turn.  As well it should.  Because Thursday night, on national television, TJax showed how valuable he can be to a pass rush. In fact, despite the fact that TJax was only in on 18 plays where he was rushing the passer, he had 3 QB hurries and 1 batted pass.  So 4 "impact" plays in 18 snaps, or 22 percent of the time he was in.

Of course, those are just numbers, and we all know numbers (and math) are evil.  What's the practical application for TJax on the Chiefs defense?  Well, it's a matter of numbers.  The Chiefs barely ever sent more than 4 pass rushers against the Eagles on Thursday night.  And the hallmark of a great defense against the pass is the ability to get pressure with only 4 rushers (incidentally, this is the only way anyone is going to beat Manning and the Broncos this year, but that's for another column).

Now on the pass rushing downs TJax is in, it's almost always TJax, Poe, Houston, and Hali getting after the passer.  In the past, teams have been able to take on the Chiefs interior DL with one-on-one matchups for the most part, allowing for extra attention to go to Tamba and Houston (a G can ensure that Houston doesn't use an inside move, for example, which allows the RT to commit completely to the outside).  Additionally, with teams knowing the Chiefs weren't going to get an inside push, tackles could allow our outside rushers to go by them to the outside, knowing the quarterback could just step into the pocket and complete the pass before Houston or Hali could complete their "loop."

That has changed drastically this year.  Poe has been causing havoc up front.  This means teams are committed to having two interior OL on him on every passing down (because if they don't, he makes them pay).  Houston and Hali obviously require the full attention of the tackles, and at least 1 more blocker (now that tackles can't "cheat" when blocking them like they used to, as discussed above) in the form of a RB or TE.  In short, you've got a situation where the offense is already committing 2 blockers to 2 guys (and sometimes 3), which leaves TJax with a lone blocker.

So what is he doing with that matchup?  If TJax can win that individual battle, we've officially created a situation in which our 4 rushers are getting pressure EVEN THOUGH the offense is committing 6-7 blockers.  Which is, as they say, gravy.  Because it leaves our coverage situation as such that we've got 7 players covering 3-4 receivers as the QB is being pressured.  There's no better possible way to destroy a passing offense.

And fortunately for us, TJax is often winning that individual matchup.  Let's take a quick look at what he's doing when matched up alone against a guard. 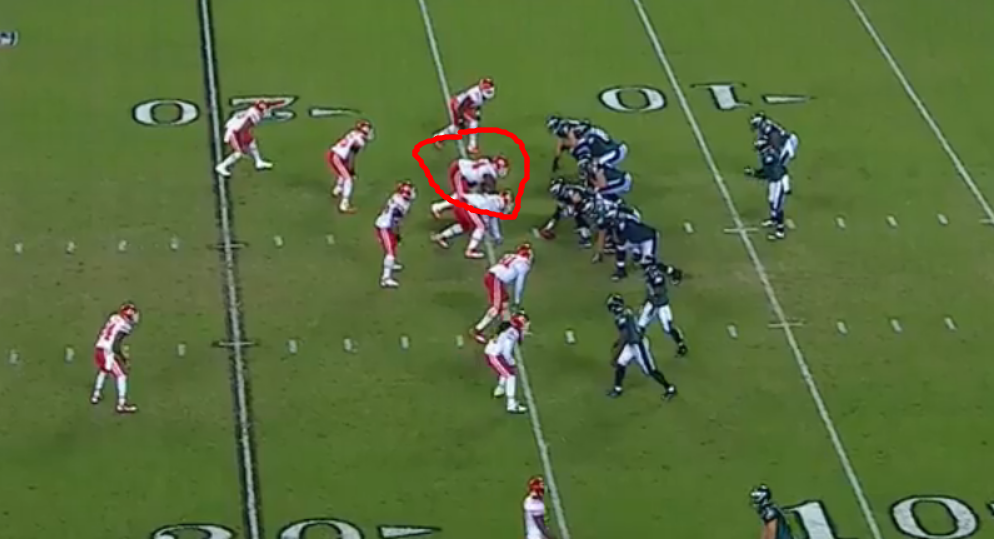 As you can see, the Chiefs are lined up Houston/TJax/Poe/Hali.  My super-professional circle shows you where TJax is lined up.  The eagles are in a "gotta pass it" situation. 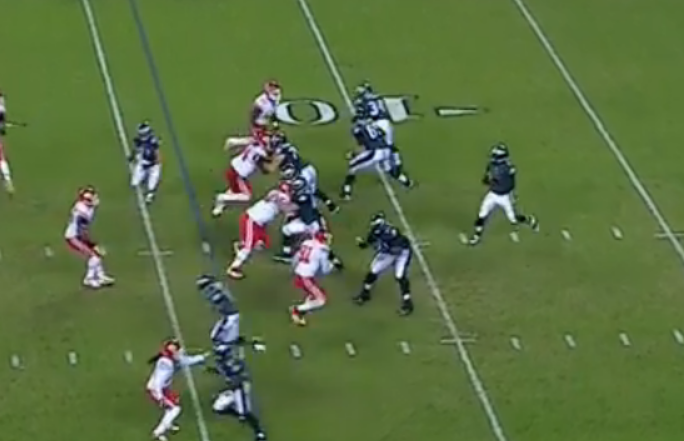 The ball is snapped and Vick drops back to pass.  Two blockers are assigned to Poe and the RB is on his way out to run a route.  This leaves TJax, Hali, and Houston all with individual matchups.  This picture shows TJax the moment he engages with the RG.  Note that the G is at about the 12 yard line at this point.  Let's go forward one second. 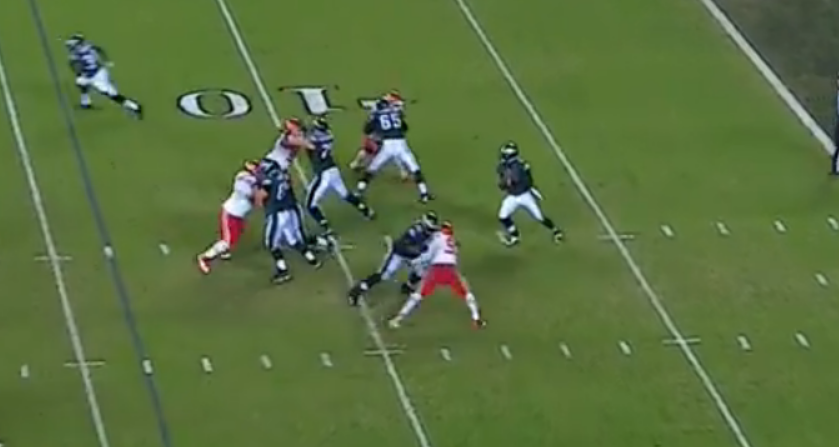 We are literally one second in the future now.  Notice where the RG is?  He's been driven back 2-3 yards already.  Yes, Tamba and Houston are doing all kinds of Tamba and Houston things already, but that's really not the point here (although it's awesome).  The RG is trying to anchor and hold off TJax's bull rush.  So far, he's not having much success.  Let's go forward. 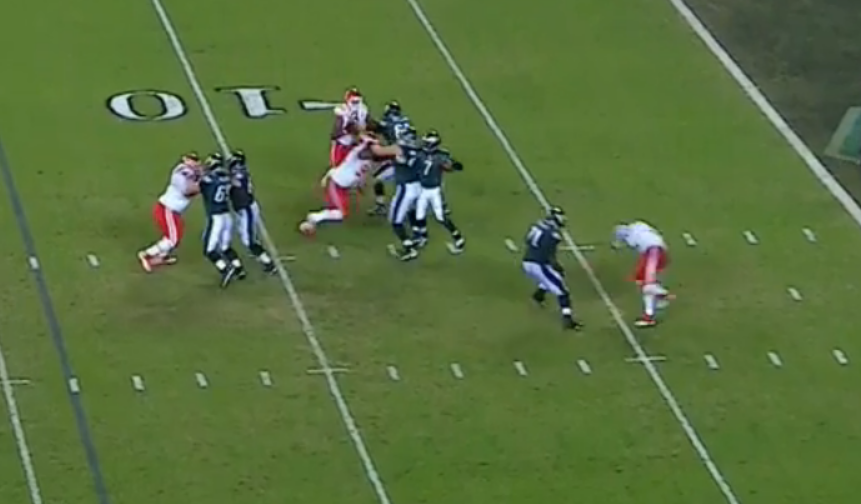 Again, we're a mere second in the future.  At this point, TJax has manhandled the RG another two yards right into Vick's lap, actually knocking Vick with his own offensive lineman.  This is the definition of collapsing the pocket.

Of course, since Vick is Vick, he actually pulled off a ridiculous escape and completed the pass ( I hate that guy).  But the point remains TJax was given the individual matchup and won with the oldest trick in the book: simple brute force.  The RG just isn't strong enough to hold of TJax on his own, and there really isn't much that can be done to compensate for that other than to send another blocker at TJax.  Of course, you can't double him when you've got Houston, Poe, and Hali to worry about.  So you're stuck with zero options.

Here's another example of the same thing, from the same drive. Let's just walk through it frame by frame.  TJax starts off lined up almost directly across from the RG (I know, how will you know for sure without my awesome circle????). 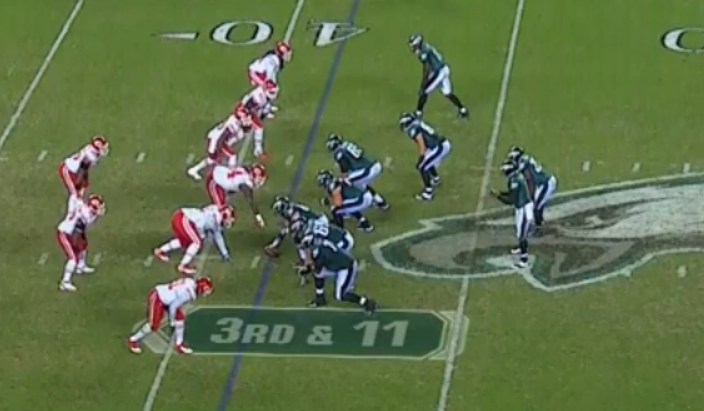 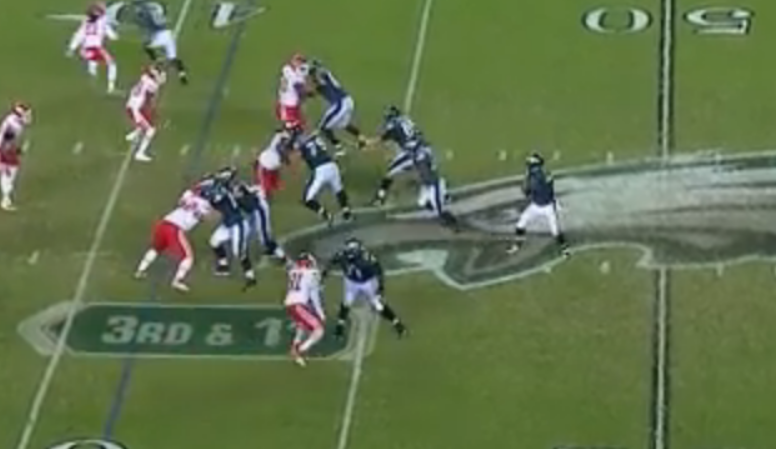 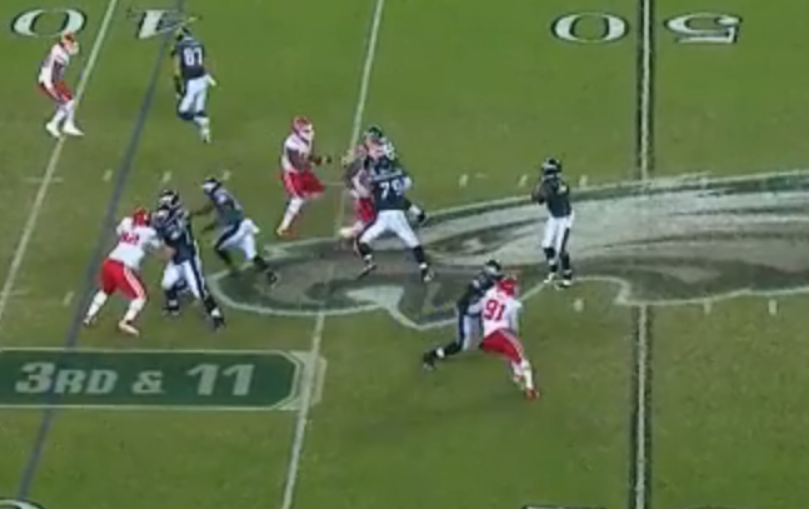 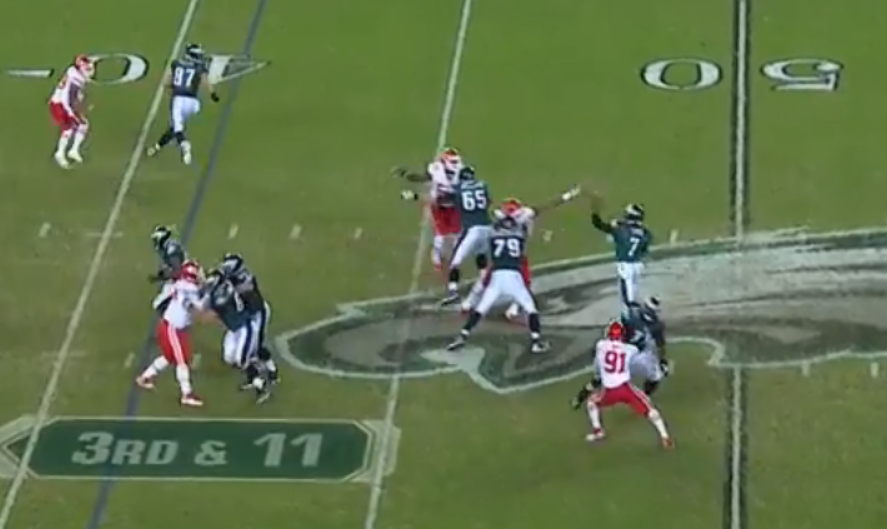 These four images show a play over the course of about three seconds.  As you can see, Poe again draws the double team at the snap (the Eagles were terrified of him).  Houston gets engaged briefly by the TE on his way out to a route.  This leaves only Hali and TJax with individual blockers the whole play.

And TJax, once again, was way too much for that poor RG to handle by himself.  He drives five full yards right into Vick's lap.  This time, Vick is trying to get rid of the ball quickly (you can't see it, but Dunta Robinson actually had very good coverage here).  It's not fast enough though.  By the time Vick is releasing you can see TJax extending his left arm.  He gets a hand on the ball, causing an incomplete pass and getting us THIS close to a second pick by Berry.

These types of plays (for the record, I could show you similar plays from Mike DeVito, too) are what takes the Chiefs defense from "good" to "absolutely frightening."  There is nothing the offense can do about it.  You can't double team TJax without either

B)  Having a TE block Houston (again, death sentence)

Basically, when TJax is able to win his matchup like this, the only thing an offense can do is get rid of the ball instantly or keep seven guys back to block four.  And that first option doesn't work well against our press coverage, as most WRs aren't able to separate quickly from Flowers or Smith.  Also (and Chiefs fans should be familiar with this), sticking with only short routes allows the defense to sit on those routes and invites turnovers.

As far as keeping seven guys back to block, the Eagles resorted to that a few times (not many, though).  The problem THERE is that leaves you with 3 receivers running routes against seven defenders.  And when your secondary is as talented as ours, those 3 guys are almost never going to get open quickly.  Which leads to coverage sacks/pressures.

In other words, the Chiefs defense, at its peak, presents zero appealing options for an offense.  And Tyson Jackson (along with DeVito, who really deserves his own column) is a big part of the defense reaching that peak.

I'm sure smart offensive coordinators with talented players will find ways to compensate.  But at this point, with TJax playing the way he is, expect the pressure from all angles on quarterbacks to continue.  Because in a very real way, there's absolutely nothing offenses can do to stop it.