If the world didn't know about KC Chiefs LB Justin Houston before Thursday night's game, they do now. Houston picked up 3.5 sacks in the Chiefs 26-16 win over the Philadelphia Eagles.

Share All sharing options for: Justin Houston sacks the Eagles: An illustrated breakdown

There was no better way for Justin Houston to announce his presence to the rest of the football world than the only prime time game this season for the Kansas City Chiefs. It's not as if most people hadn't heard of Houston, but for anyone that wasn't privy to how special of a player he's becoming at outside linebacker, that cat's out of the bag now.

Houston's stat line is something you'd see in a video game after you spent 40 minutes on the 'create-a-player' mode. He finished the game with 7 tackles, 3.5 sacks, 4 tackles for loss, 3 passes defensed, 4 quarterback hits and 2 fumble recoveries. If that's not worthy of the NFL's Defensive Player of the Week, then I don't know what is.

Here's an illustrated look at one of Houston's sacks last night. 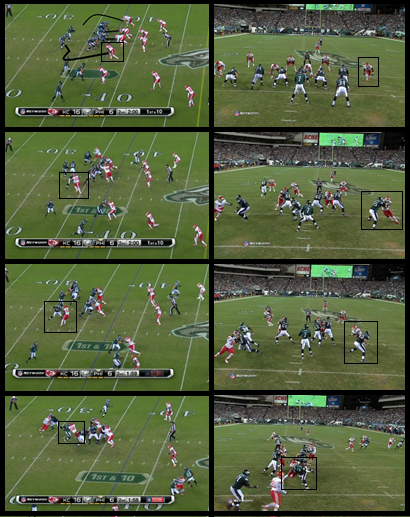 One of the reasons Houston has become such a special pass-rusher for the Chiefs defense is that he's not a one-trick pony. He uses a variety of moves to get to the quarterback and displays excellent body control and hand-usage when engaged with offensive linemen.

On this particular play Houston sets up Eagles rookie right tackle Lane Johnson by appearing to shoot up the field and bend the edge, but instead cuts back after punching Johnson's inside shoulder. Then it's almost as if he uses Johnson as leverage to push off and shoot back to the inside.

It's not about measurables, but functional athleticism and skill.

Of the pictures above, the right column's second and third pictures are the visual display of what makes Houston so special from an athletic standpoint. It's not about measurables, but functional athleticism and skill. Houston has plenty of both.

This second play displays his ability against the run. 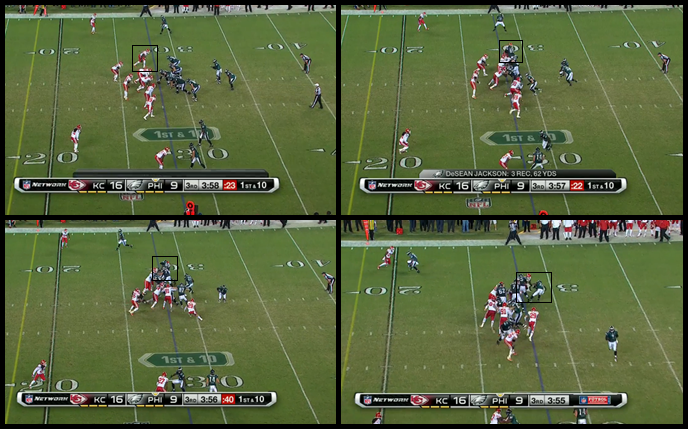 Whenever you see a running back get a big gain to the outside you know someone lost outside contain. It's that guy's job to 'set the edge' and funnel everything back to the middle of the field. This is where team defense really comes into play. You could have fantastic penetration and play from your inside defensive players, but if outside contain is lost then it's going to still be a big gain for the offense.

As you can see in each of those pictures, Houston always kept his outside shoulder free. That's the most critical thing a player setting the edge has to do. If the blocker gets your outside shoulder then you've lost contain and the back will be able to kick-it to the outside.

McCoy wasn't going to get the outside on this play, but because Dontari Poe and Akeem Jordan were right there closing off the inside lanes, McCoy thought his best bet was to get out in space. Houston was waiting for him and easily picked up one of his four tackles for loss on the play.

It's also a good look at the Eagles option offense on the play. Wide receiver Riley Cooper is an option on the screen to the outside, and Vick could just keep it himself based on what he seeing at the mesh point. Eric Berry is clearly visible to Vick on the outside and the quick-hitter to Cooper would have been a dangerous throw considering where cornerback Sean Smith is lined up (press-man). Smith is also looking right at Vick reading the play.

The Chiefs defense played this perfectly and Houston as the backside contain was key to stopping it. While this play looked good for the Chiefs run defense, it's hard to conclude that they played well as a whole in this game, giving up 260 yards rushing on a 9.3 yards per carry average.

Justin Houston has hit Mike Vick more times than the Houston Astros can hit a baseball.

The good news for the Chiefs is that they won't face another team with offensive weapons like that in the running game for the rest of the season. The bad news for the rest of the NFL is that Justin Houston doesn't care what kind of offense you're running, and he's on pace for 34 sacks this season. The NFL record for sacks in a season is 22.5 by Michael Straham back in 2001, and the Chiefs record is 20, set by Derrick Thomas in 1990.