It's game day! I spoke with Brandon over at SB Nation's Eagles blog, Bleeding Green Nation, about what to expect in tonight's Chiefs-Eagles game. We covered Michael Vick and the Eagles offense, the best way to attack Philly's defense and of course Andy Reid's return to Philadelphia.

Share All sharing options for: KC Chiefs vs. Eagles 2013: 5 questions with the enemy

1. Name one player on offense the Chiefs need to keep an eye on.

DeSean Jackson is playing lights out right now. He's totaled 16 receptions for 297 yard and two TDs through his first two games. No one is able to keep up with him in deep coverage. He burned the Chargers deep 4 times, but Vick and him only connected once on those attempts. DeSean easily could have had more TDs and yards. Andy Reid is no stranger to this playmaker.

2. Name one player on defense the Chiefs need to keep an eye on.

Do we really have to talk about the defense? The Eagles defense has struggled this year, especially in the secondary. They simply lack talent. To make matters worse, they can't rush the passer. OLB Trent Cole could be the guy to watch. He is still a good run defender, and that might be a concern for Jamaal Charles.

3. Break down the advantages of the Eagles moving fast. Why do they do that?

Chip Kelly says the fast tempo is just another weapon to his disposal. Oregon Ducks football film site has a nice video where they look at some of Oregon's no-huddle plays. The goal is to attack aggressively without giving the defense a chance to respond. Chip doesn't care about time of possession. He wants his team to score fast and often.

4. How is Michael Vick looking this year? Is he still a threat to scramble regularly?

Michael Vick has looked really great. It's only been two games but he's found a way to stay healthy so far and the only turnover he's had was a fluke backwards pass fumble call against the Redskins. Chip Kelly has done wonders for Vick's game. He is still very much a threat as a runner, as seen in a 36 yard run against Washington.

5. Where are the strengths of the Eagles defense? 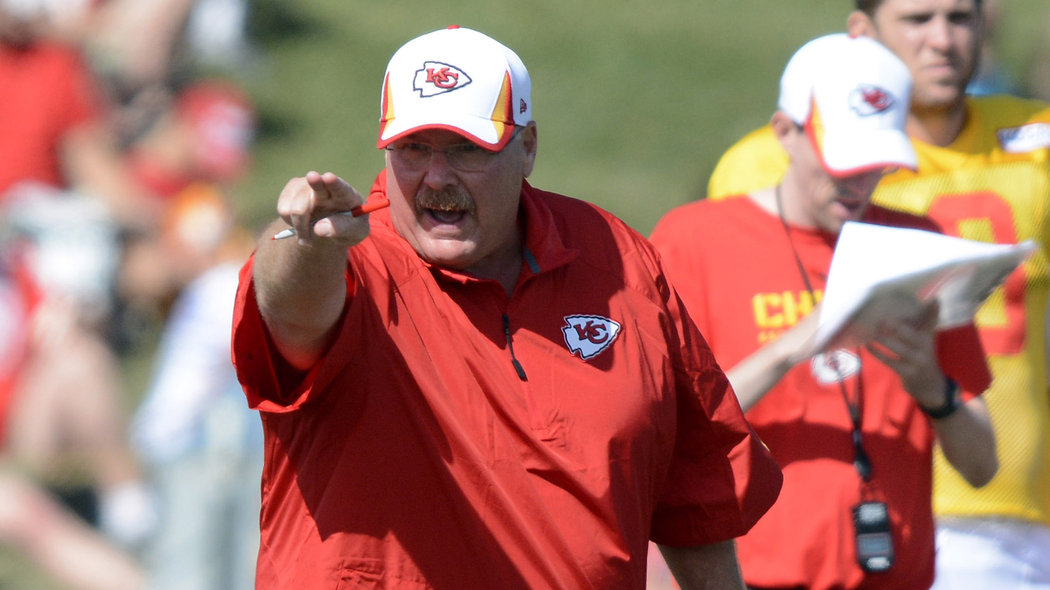 Well... um... nothing? I'm not sure how strong this defense is at anything. Let's replace "strengths" with "least horrible aspects". Run defense. Philly hasn't been able to rush the passer or cover anyone, so run defense wins by default. Another thing has been forcing turnovers. The Eagles are tied for second in the league with forced turnovers (2 INT and 3 FUM).

6. What will the reception for Andy Reid be? What are your personal feelings on his return?

Ah, yes. The elephant in the room. The greatest coach in Philadelphia Eagles history returns to The Linc. There will be a lot of cheers. Andy's tenure came to an unfortunate end in Philadelphia but a lot of people can appreciate the things he did for this team. Some people will boo, it's not even a question. But the cheers will be more frequent and louder than those.

Andy Reid was the only Eagles coach I ever knew.

Andy Reid was the only Eagles coach I ever knew. I'm thankful for everything he did here, and I hope he does well for himself in KC. But I've moved on and the Eagles made a really great hire in Chip Kelly. I have all the respect in the world for Andy Reid, but during the game on Thursday night he is only another part of the opposition.