Will the Philadelphia Eagles speed matter vs. Kansas City Chiefs?

What have the Philadelphia Eagles REALLY proven? They face the KC Chiefs on Thursday night.

Share All sharing options for: Will the Philadelphia Eagles speed matter vs. Kansas City Chiefs?

I may regret writing this.  Putting yourself in a position to eat a ton of crow is never a good idea.  So let me just say, prior to everything else, that I totally concede there's a chance I'm wrong.  That said...

What is the big deal?

Can someone please explain to me why a 1-1 team is getting the royal carpet treatment from ESPN, NFL Network, Twitter, and every other conceivable source of news?  Pretty sure I saw a plane doing smoke signals an hour ago saying, "The Eagles offense is super fast, yo" (an admittedly odd smoke signal.  Why waste money on the "yo?").

Look, I get it.  The Eagles take snaps really fast.  They sprint into and out of the huddle.  They run around like they're all smokin' something in the huddle (is that OK to write? I look forward to seeing if that one makes it. Ed. Note: Barely -Joel).  They run formations that no one has ever seen (OMG OMG did you hear they lined up tackles as wide receivers????).  They jumped all over the Redskins on national television with the most one-sided half of football we've seen since teams were doing it to the Chiefs every week in 2012.  Their coach somehow talks by only moving part of his mouth.  It's all very exciting.

Can someone please explain to me why a 1-1 team is getting the royal carpet treatment?

At the end of the day, though, let's throw out all the hype, hoopla, and other word that starts with "h."  (Today is "You do the alliteration" day).  What has the Eagles offense ACTUALLY accomplished?

Well MN, you crazy son of a gun, they scored 26 points in the first half against the Redskins!

Wow, that's awesome.  Really impressive.  But then what happened?

What happened was they proceeded to (after scoring a TD on after an INT gave them a shortened field) do this on their next 4 possessions in the 2nd half...

But MN, they were KILLING the Redskins.  They were just killing the clock!

Fair enough.  The problem is by the time you get into those last two drives, the Redskins had climbed back to within two scores and were suddenly marching all over the field (despite RG3 clearly being a shell of what he was last year).  And with the last possession, the Redskins were a TD away from a tie and had ALL the momentum.

So... where was this killer, unstoppable, better-than-anything-ever-guys offense when they needed a sustained drive?  You can't tell me that the Eagles weren't doing everything they could to move the ball on those last couple drives.  They NEEDED yards.  They NEEDED points.  Their D was actively choking the game away.  And the offense did pretty much jack and squat.

Yeah, well, they dropped another 30 on the Chargers, and were SOOOOOO close to scoring 21 more points!

First of all... it's the Chargers.  Really?  How is it no one gave the Chiefs any credit for stomping the Jaguars into the ground (since they're terrible on an epic level), but the Eagles put up 30 points on a mediocre defense and everyone freaks out?  We'll get back to this point in a second.

Let's address this whole, "They almost had 21 more points," argument.  I've also heard that in the form of "They've left points on the board with little mistakes." 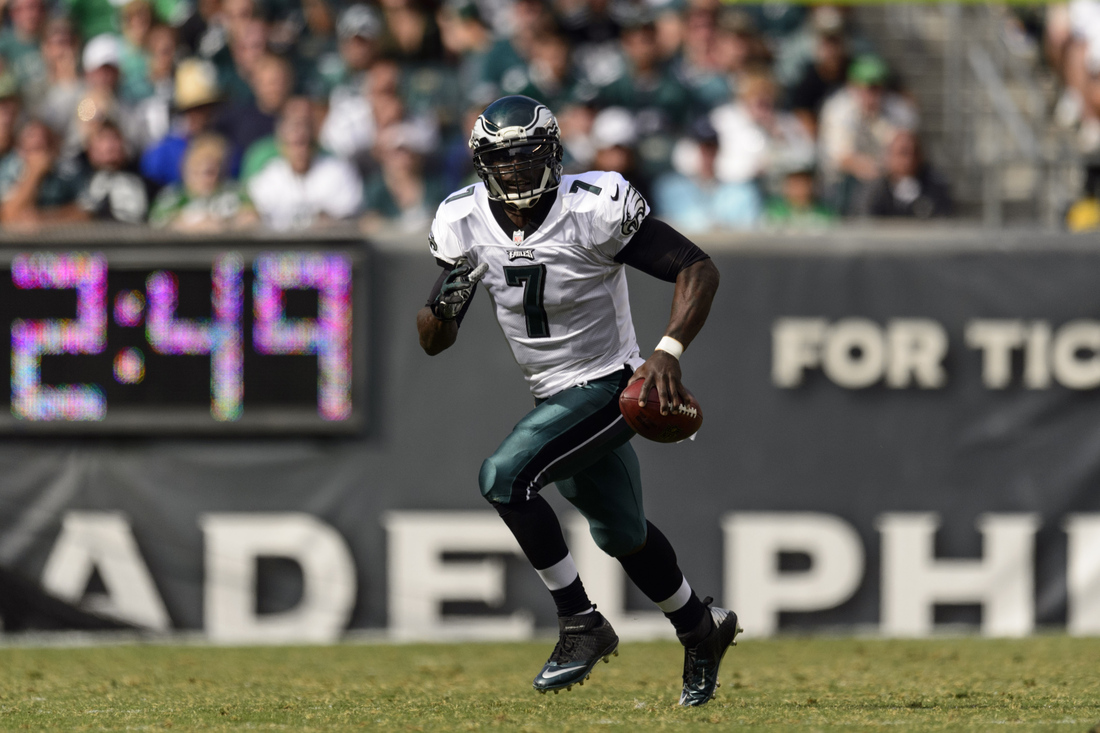 Correct me if I'm wrong, but isn't avoiding those little mistakes and finishing a part of being a great offense?  If any other team was "almost" scoring a bunch of touchdowns, would anyone care?  Or would we deride people making those arguments as "making excuses."  Mike Vick always has been, and always will be, a guy who makes mistakes and leaves points on the board.  That's not going to change magically this far into his career. So please, don't tell me about how they "almost" scored more points or had more yards.  Yeah, and the Chiefs "almost" bottomed out the correct year to draft Andrew Luck and "almost" beat the Steelers last year.  No one cares about almost.

Back to the defenses they've played.  Now, we're only a couple games into the season, so it's early to say exactly how good or bad a team's defense is.  But we DO know that the Redskins had the fourth worst scoring defense in the league last year, and that the Chargers were right in the middle of the pack (and that was with getting to play the Chiefs and Raiders four times.  Talk about a gift). Hardly awe-inspiring defenses to beat, especially when you have the advantage of surprise with a new offense. 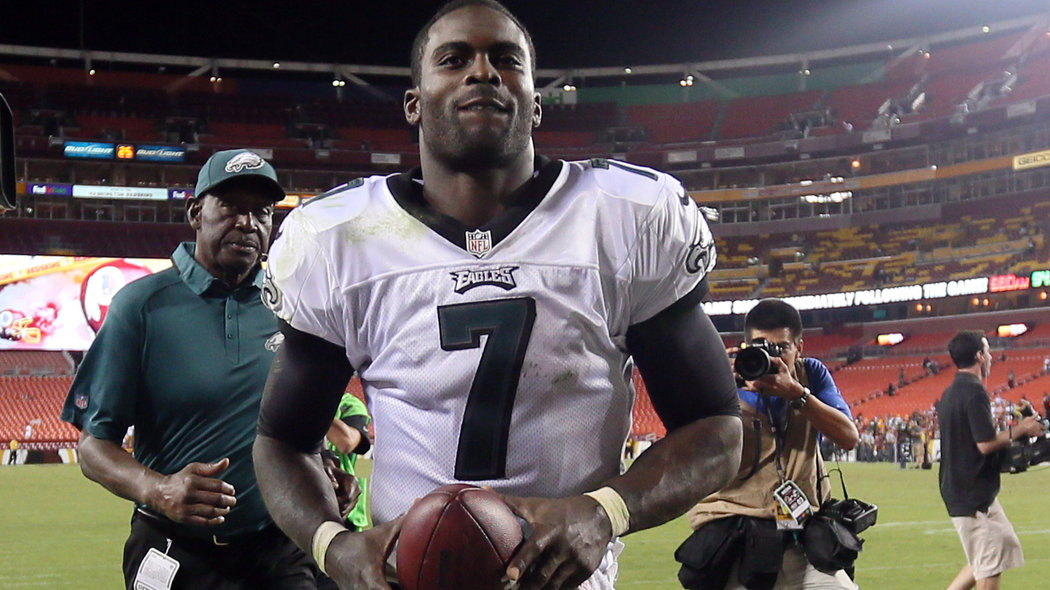 Now, a couple of caveats need to be given here.  First, the Texans had an overtime to put up an extra three points against the Chargers.  But... they also had Arian Foster running ineffectively coming back from injury.  The other caveat is that both the Texans and the Packers have very, very good offenses.  The Texans boast an extremely versatile attack and Aaron Rodgers is a cyborg.  So it's not as if this shows the Eagles offense is BAD (because that would be stupid).  But can we really say their offense is any better than the Packers, Texans, Broncos (now you want to talk about a potential record-breaker there, I'm in), or any other of a dozen very good offenses?

The point here is simple: it's too early to crown the Eagles as some kind of phenom.  They haven't done anything that other good NFL offenses couldn't do.  Frankly, the "speed" aspect of that offense is overrated.  There's no way they're able to sustain it for an entire game.  You've got guys out there in their late 20's and early 30's, not a bunch of teenagers who can run all day.  Additionally, in the NFL you're not going to score in five plays every drive the way Kelly's offenses did at Oregon.   The offense is going to fall into its own trap eventually.

Now, Kelly's an innovator, and a sharp guy.  I fully expect his offense to be good.  And they are good. With Vick, DeSean Jackson, and LeSean McCoy it'll be tough for the offense to NOT be good (insert an Andy Reid's 2012 season joke here). Maybe a month from now I'll be joining the chorus of fanboys.

But please, ESPN, I'm begging you, stop with the whole "Chip Kelly is changing the NFL" thing.  It's only been two weeks and I'm already sick of it.