The importance of 3-0 for the Kansas City Chiefs

Hello there! Here are five facts about the Kansas City Chiefs that you can use to show off to your friends about how knowledgable you are about the Chiefs, including a good one about the importance of 3-0 (since everyone will be asking that if they win).The league's research department came up with these facts.

Share All sharing options for: The importance of 3-0 for the Kansas City Chiefs

This is why 3-0 is so important. That's such an advantage to start out of the gate like that. The Chiefs last did this in 2010. That team finished 10-6 which means they went just barely over .500 the rest of the day. That 2-0 start was huuuuge that season. (They were the last undefeated team that year!)

Lots of things can change over the course of 16 games but history is clear: Start 3-0 and you have a great shot at playing in January.

2. The Chiefs, Bears, Dolphins and Saints are 2-0. None of them made the playoffs last year.

I love parity in the NFL. It's why the league is so great. I can think of maybe two fan bases who knew before the season that they weren't very good (Jaguars and Raiders). Everyone else? There are fans who legitimately believe they could make the playoffs.

Parity is great, unless the Chiefs are bad. Then parity is stupid.

3. Andy Reid looking to become the first Chiefs head coach to start 3-0 in his first season

Andy Reid on his return to Philly 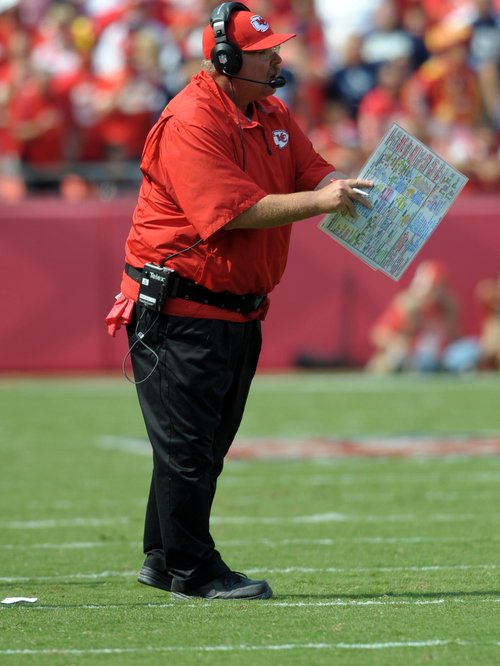 "I want to make sure that I concentrate on the game at hand and that's anything else it becomes a distraction and I'm not going to allow that to happen," Reid said.

Did I just black that Vermeil start out of my mind? I didn't remember it being that bad.

Andy Reid has started 3-0 once in his career. The Eagles made the Super Bowl that year (2004).

4. Five teams started 2-0 after losing 14+ games the previous season. Four of those teams went onto 3-0.

Interesting. The Dolphins have the greatest single-season turnaround in NFL history. They went from one win to 11 wins in 2007-08. Let's slow down before we start working those numbers for the Chiefs. It's a long season.

5. Andy Reid will join Curly Lambeau and Hank Stram as the only NFL coaches to face a team they previously coached for 14+ years.