The Kansas City Chiefs once again came out ahead this week behind a strong defensive showing, particularly from nose tackle Dontari Poe. Kalo sums up the big guy's day and shows some other bright spots on the defense.

On a day when Dallas Cowboys' Dez Bryant should have grabbed the headlines, Dontari Poe and the Chiefs defense showed why they are currently the No. 3 defense in total yards allowed, and No. 2 in points allowed. Dallas came out firing, targeting Brandon Flowers and the 1-on-1 matchup he had with Bryant ... and it was pretty brutal. Pass after pass, Bryant used his strength and reach to dominate poor Flowers, and it looked like it might be a long day for the secondary and the defense in general.

But then, all of the sudden, the stops started happening. Dustin Colquitt was pinning the Cowboys offense deep in their own territory, and they were struggling to get out. They couldn't run (DeMarco Murray had 25 yards on 12 carries), and the two biggest wideout options outside of Bryant were stifled (Miles Austin: three for 31 yards, Jason Witten: three for 12 yards). Poe nabbed two sacks. Tyson Jackson swatted down two passes at the line of scrimmage. The front seven was on lockdown. But after an early FG given up in the second half, it seemed like the Cowboys had made the proper adjustments and were going to move the ball again. 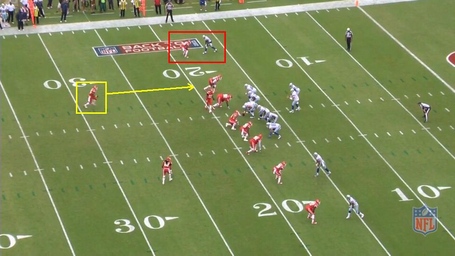 This first shot is taken right before the second offensive play of the game for Dallas. It shows Flowers in single coverage, and Quintin Demps is going to show blitz. Demps, however, is NOT going to blitz, and will instead drop into coverage. As Demps rushes the line, Tony Romo snaps the ball and throws into the single coverage on Bryant. It works out to be a pretty easy 53 yards. So what changed in the second half to limit Bryant? 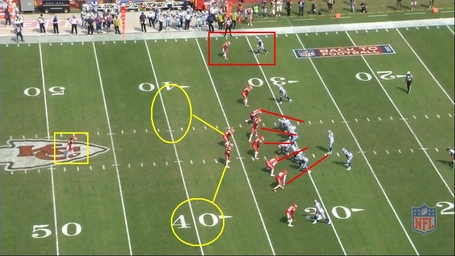 The Chiefs blitzed MORE, and with linebackers instead of safeties. Towards the end of the first half, and beginning of the second, Tony Romo began to see the pocket collapsing more, and quicker. I wouldn't really call him "pressured", as he dealt with it pretty well. However, this meant that the receiving corps had to show earlier and more often. As Chiefs defensive coordinator Bob Sutton dialed up the blitzes and routinely rushed five Chiefs, the receivers routes got shorter. A couple hits on Romo later, and now Dez Bryant is forced to run 5-7 yard routes rather than 15-20 yard routes ... and without having to commit a safety to bracket coverage, too. It was a gamble, but one that paid off for Bob Sutton and the Chiefs defense.

Let's showcase a little confusion here. It's second down and four to go, just before the end of the third quarter. 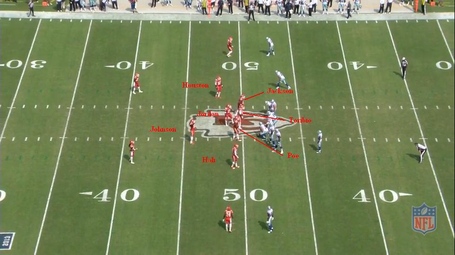 The Chiefs are in a 3-4 defense, and Romo has approached the center. He's evaluating the defense, to see what the Chiefs have given him. He calls out the Mike linebacker (55 - Akeem Jordan), and backs away to the shotgun position. DJ then comes up to the line and switches Anthony Toribio and Dontari Poe, moving Toribio all the way outside. Here it is from Romo's point of view: 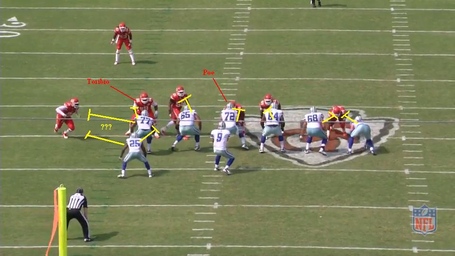 It's a weakside overload blitz. Okay, no big deal for the offensive line. Someone's got to pick up Tamba Hali, and someone's got to pick up Toribio. Unfortunately, because the defense shifted JUST before the ball was snapped, a change didn't get a chance to be communicated. This is something that ends up working out even worse when the linemen realize... 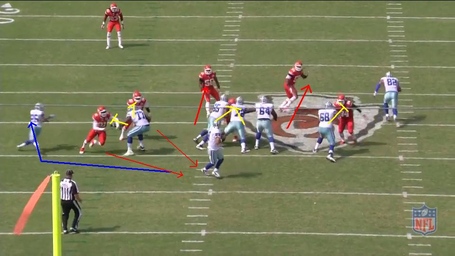 ...THE INSIDE LINEBACKERS DIDN'T BLITZ! There are now three players blocking Dontari Poe, and because the running back is moving into the flat, only the left tackle to block both Hali and Toribio. Which, as you may guess, isn't exactly a good thing for the offense. 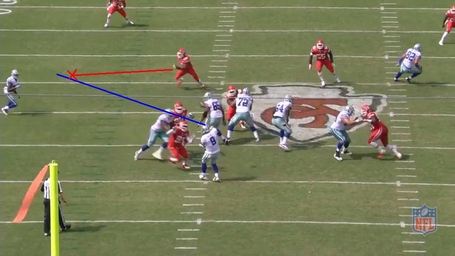 I've got to give credit where credit is due, Romo still makes the play. However, he's only got one option available (look at Jason Witten just starting to come out of his break), and DJ's already making a beeline to stop the running back for a short gain. He, unfortunately, missed the tackle, which allows Jordan, fortunately, to knock the ball loose on the second tackle.

That's right, the Chiefs helped Brandon Flowers in coverage ... by not allowing the Cowboys offense time to run the plays that gave him the most trouble in the first place. 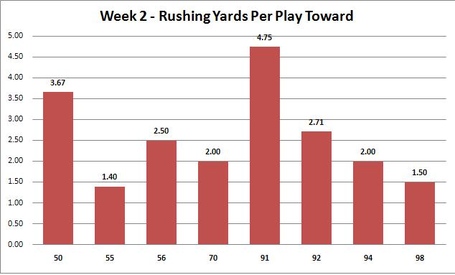 Two players got hurt by ONE RUN this week: Tamba and Poe. Late in the second half, the Chiefs were in the dime defense, and Poe got trapped inside by a double. Tamba got too far upfield. The gap was huge, and it went for the longest run of the day: 12 yards. Without that, Tamba averages 1.75 YPPT, and Poe averages a WHOPPING 1.00 YPPT OVER 7 PLAYS. That is a ridiculous performance from the big man, especially when you chalk another two sacks up for him. Also of note, Tyson Jackson with 2.00 YPPT in five plays, and Akeem Jordan with another good performance at 1.40 YPPT in five plays. When those three are lined up on the same side, teams should probably never run at it. 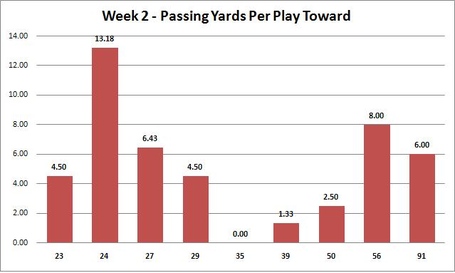 Ouch, Brandon Flowers ... that hurts. I clocked him at 11 targets for 145 yards, most of the damage done by Dez Bryant. Sean Smith gave up his first catches of the year, targeted seven times for 45 yards in a decent performance against Miles Austin and Terrance Williams. DJ gave up the third most yardage with 40 yards in five targets. Husain Abdullah and Quintin Demps both got in on the action late as the Cowboys were trying to drive down the field near the end of the game. Both made crucial stops on the drive.

Honestly, it was more than I could have hoped for out of this defense. I've witnessed too many times in the past couple years where a team would score early and move the ball well, and nothing would work to stop them for the rest of the game. Sutton made changes that I wasn't expecting (I figured he'd bracket Bryant), and it really paid off. He's a wily one, that guy. Not enough can be said about Dontari Poe's play this week as he once again set the tone up front and disrupted multiple plays and now sits 3rd in the NFL in sacks. Tyson Jackson continues to have a quietly good start to the season, with 1.70 YPPT through two games with three QB pressures, two batted balls, and one sack. Finally, Akeem Jordan continues to show why he'll hold down that inside linebacker job with yet another team-leading performance against the run.

Everybody knows what gets Arrowhead rocking on a Sunday: big defensive plays. There were plenty. Chiefs fans, it was nice to have the decibels up again.