Cowboys Vs. Chiefs: The Best And The Worst

His Dirkness recaps the Chiefs 17-16 victory over the Cowboys with the best and worst moments of the week.

Share All sharing options for: Cowboys Vs. Chiefs: The Best And The Worst

Are you ready?
Ready to partake in an actual NFL season that is!
Lost in the depression and sorrow of a down in the dumps Chiefs season is the effect it has on the greatest product known to mankind.
No, I'm not talking about DVR or Shatto's Banana Milk or the chillow or Twitter or Zubaz or beer or oysters and Chicken A La Mer at The Jazz (I like it more than BBQ, alright!).
I'm talking about the NFL, which can become more boring than a Floyd Mayweather fight if you're a devoted fan of a team that goes 2-14 and breaks records of futility dating back 84 years ago.
But now? Well, now I'm confident that we'd beat the 1929 Buffalo Bison by AT LEAST two touchdowns (advice: start Jamaal Charles in fantasy that week).
Also, now I can watch the 3:00 game, Sunday Night Football, Monday Night Football, highlights shows, LeBatard's show, and PTI, and do so in peace. Not to mention eating, breathing, writing, reading, podcasting, talking, sleeping, euphorisizing, fornicating, Schwartzing, living and dying football.
Football, baby. Football.
All-red everything from here on out…

The Best & Worst With His Dirkness

Best NFC division to draw this season - The NFC East. I believe Andy Reid's familiarity with, and knowledge of, the Dallas Cowboys was a major factor in the Kansas City Chiefs' 2012-victory matching win yesterday. You think holding Jason Witten to three receptions for 12 yards was by accident? Or just stellar coverage all game long? Nah, ninja. I'm here to tell you that was by design. Andy Reid knows that Witten, not Dez Bryant, not DeMarco Murray, is the steady force for Dallas. The Chiefs took away Tony Romo's security blanket (and I mean, who still carries a blanket with them? I ditched mine WAY before college). The result was a few big plays, but nothing consistent, and only 16 points. I don't think Reid's familiarity with the NFC East will be much of a factor against Philadelphia or Washington (newer regimes), but it will be once again in two weeks when the Giants come to town, a game I'm suddenly feeling confident about.
In related news, I LOVE Andy Reid.
Best offseason addition (not named Andy Reid) - Bob Sutton, who is making Romeo Crennel look like an older, fatter Bill Cosby / Santa Claus hybrid (oh, he already looked like that? Damn). Look, if you zoom out enough, the NFL is really about one thing - The quarterback. The best, and perhaps only, way to counter that is to attack the QB. Make him uncomfortable. Confuse him. Hit him in the mouth. Or in Bob Sutton's case, all of the above. 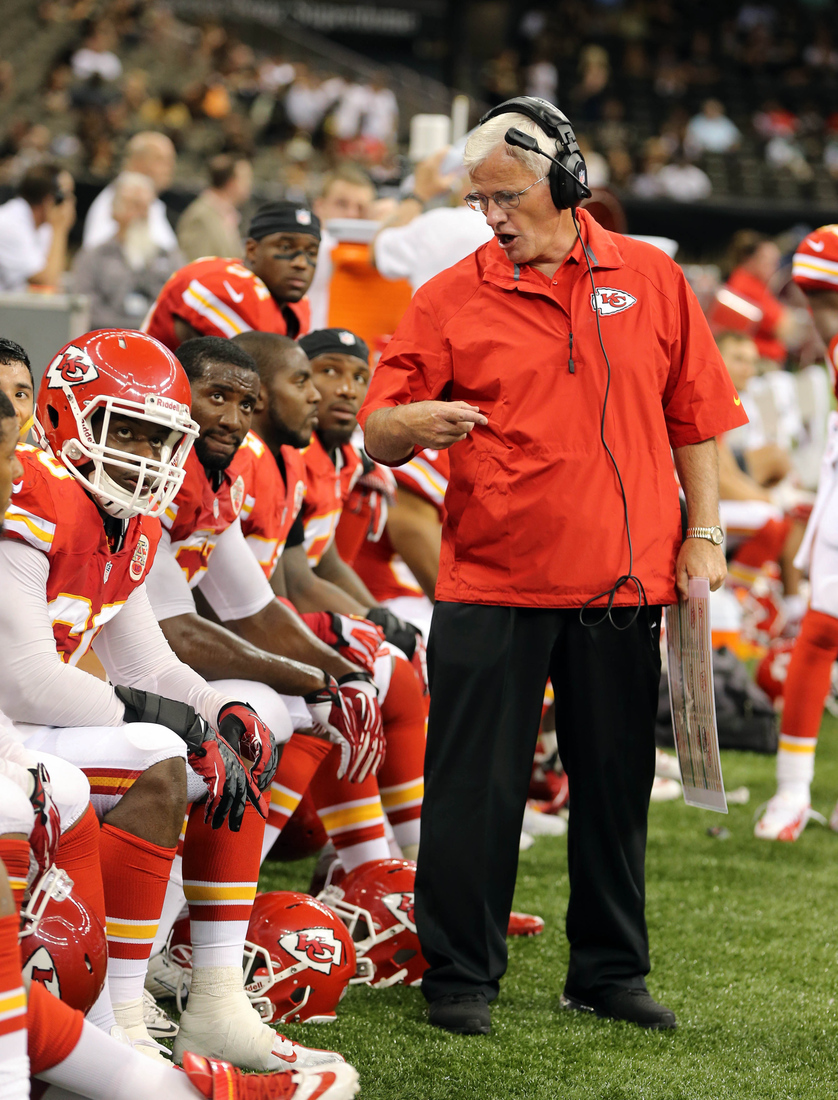 Chuck Cook-USA TODAY Sports
Best cross-sport comparison for this Chiefs offense - Playing "small ball" in baseball. Look, we know this offense is limited. The WR's lack downfield speed. The OL has some protection issues. Alex Smith doesn't have a great arm. Because of this, the Chiefs have to "manufacture points." By this I mean: gameplan, play design, field position, down and distance management, and red zone efficiency.
Now stick with me because I abhor baseball, but I did read the Wikipedia page just now heavy research last night and found a few interesting quotes:

"an offensive strategy in which the batting team emphasizes placing runners on base and then advancing them into scoring position for a run in a deliberate, methodical way."

Down and distance. Lack of big plays. No negative yardage.

"The team lacks consistent hitters and must find a way to score runs with few base hits."

Lack of playmakers.
I'll finish with a quote from my buddy, John, who isn't nearly as smart as Wikipedia, but he does know baseball.

"It's something you see when you don't whole-heartedly trust your offense AND / OR if you trust your pitching and defense that 1 or 2 runs can win the game."

Substitute "pitching" with "coaching" and "1 or 2 runs" with "17 or 20 points" and I think you've got yourself the 2013 Kansas City Chiefs. Can manufacturing points hold up over the course of an entire season? If you're talking Super Bowl, probably not. But if you're talking making the playoffs and giving your team a shot, then absolutely. And one year off of a 2-14 season, it's hard to ask for more than that.
Best player on the team - Dustin Colquitt, come on down! "The Punt" as it will now be known, inspired this series of tweets on my timeline yesterday. But once wasn't enough for the GOAT. No way, no how. With under 30 seconds left in the game, and the game on the line, Andy Reid dialed up his best player's number once again, and Colquitt uncorked another beauty that landed inside the five. Those are championship quality punts. LeBron James wishes he had Colquitt's clutch gene.

Listen to the postgame podcast 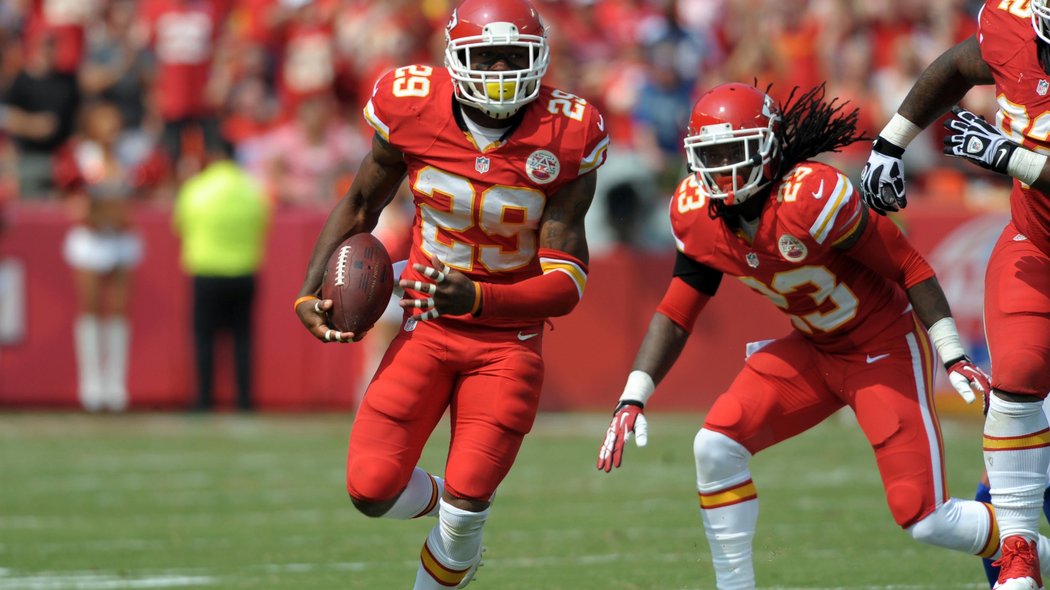 Worst play made by a guy you've never heard of - Marcus Cooper, who spoiled "The Punt" with a boneheaded mistake. In the Lebron / Colquitt analogy, this guy is Mario Chalmers.
Best play made by a guy you've never heard of - Ron Parker, who strip-sacked-recovered Tony Romo in the 4th quarter.
Best way to win over a QB-starved city - Dive head first on a gutsy run to pick up a 3rd and 15. Oh, and outrushing LeSean McCoy, Ray Rice, Maurice Jones-Drew and the entire Cowboys offense on the day helps too.
(not the) Worst call of the day - Maurice Claiborne's pass interference on Donnie Avery. Initially, I thought this call, which basically sealed the victory for the Chiefs, was just as bad as the holding call on Berry earlier in the game (so bad). However, in replay, you can kinda see Claiborne throw Donnie, Who Loved Bowling to the ground with his right arm before diving over him to make the play. What should Claiborne have done? Let him catch the pass and make the tackle. He would've been five yards short of the first down.
Worst job in sports - Playing CB in the NFL. I didn't even think Brandon Flowers played bad, but was still getting abused by Dez Bryant. Sometimes bigger and faster just wins. Plus, having to deal with the ridiculous pass interference rules nowadays. Such a thankless job.
Best sign of leadership - Branden Albert. I've always been infatuated with who leads a players huddle, no idea why. Ray Lewis was always great at it. Drew Brees. Keith Brooking. With the Chiefs, Brian Waters (who, oddly enough, lined up with the Cowboys yesterday). Yesterday, that man was Branden Albert. His was a little different, occurring mid-game (!), with about nine minutes left. Maybe I'm forgetting (so tell me in the comments if I am), but I don't remember seeing much leadership out of Albert before yesterday. That's not a criticism of him, I just never considered him in that role. It was great to see.
Oh, and then this. Goosebumps.
Best beard in the city - Sean McGrath. It looks like he killed a bear and then glued it to his face. Sorry ladies, he might already be taken.
Best way to follow up the red-on-reds - Going all whites vs. Philly. Do it!
Be sure to check out Amateur Hour's Postgame show from last night, and catch our weekly Chiefs show with former 610 host Nick Wright, released Tuesdays at 8PM on amateurhourpodcast.com
How 'bout them Chiefs?!?
His Dirkness