The Kansas City Chiefs beat the Dallas Cowboys, 17-16, to move to 2-0 on the season. What did we learn from the KC Chiefs second victory of the season? These six things.

Share All sharing options for: Chiefs beat Cowboys: This defense can win games, and more takeaways

1. The Chiefs can win if they just don't screw it up

I was on 610 Sports a few weeks ago talking with Danny Parkins and Carrington Harrison. Our topic of discussion was what the Chiefs had to do to make the playoffs. My answer: Just don't screw it up.

It's kind of an odd answer given what happened last year but the Chiefs -- their personnel, coaching and everything else -- is good enough that if KC just plays to their advantages they should be winning games. Just don't screw it up. Don't make 2012-esque types of mistakes.

I don't know that the Chiefs had any one performance from anyone that "won" them the game. But they sure as heck had a lot of players who didn't screw it up. This mentality is sort of like playing not to lose vs. to win. It's not the mentality I want the Chiefs to have forever -- sometimes you just gotta go out and know you're better and win the game -- but right now, this season, it's what is helping them.

This is our house! Chiefs beat 'Boys

For the second consecutive game, the Chiefs went plus-two in the turnover margin. This puts them at plus-four for the season. Today's turnovers came via an Eric Berry fumble recovery and a Ron Parker fumble recovery.

Turnovers are the strongest indicator of a team's success or failure. Last year the Chiefs were historically bad. This year they are one of the best turnover teams in the NFL through two games.

Andy Reid improved his career record to 28-13 when his team doesn't turn the ball over.

3. Jamaal is there when you need him

Jamaal Charles had eight carries for eight yards late in the second half. He ended with 16 carries for 55 yards. What can those numbers tell us? It tells us that the Chiefs did not use Charles hardly at all throughout the first three quarters.

But none of that matters now. When the Chiefs needed Jamaal the most, he was there. And they needed him on the final drive as they tried to run out the clock. KC got the ball on their own 16-yard line with 3:48 remaining in the game. Charles helped the Chiefs run two-and-a-half minutes off the clock with these runs (all consecutive): 3, 9, 16, 6, 4, 0, 4, 5.

Yes, his carries in the first three quarters are a concern. But when they needed him the most, he was there to win it.

4. Alex Smith is as advertised

If you would have told me what a "good" Alex Smith game would look like, I probably would've given you numbers like this:

Alex Smith is who we thought he was. And that's a good thing. 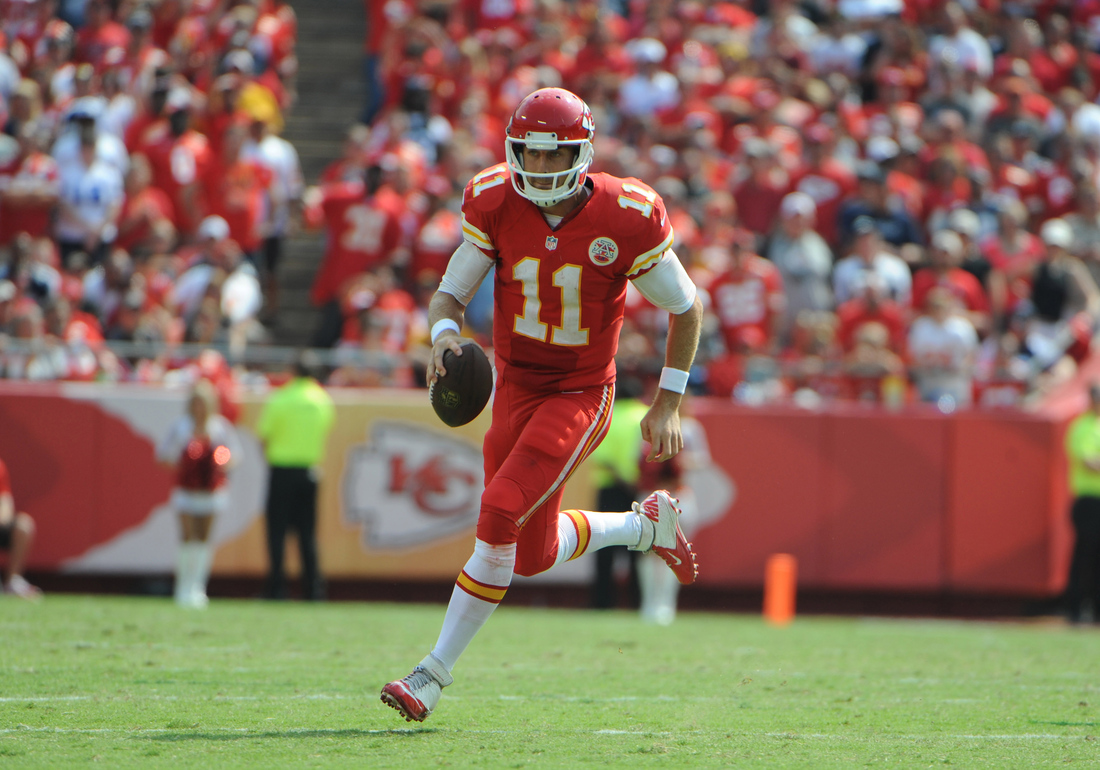 Brandon Flowers was beat up by Dez Bryant early in the game -- 100 yards on five catches for Dez in the first quarter. But after that? Four receptions, 41 yards. The Chiefs adjusted and made it work.

That's really the theme of this defense. Tony Romo damn near completed a whopping 75 percent of his passes for just under 300 yards. And his team put up one touchdown.

From the third quarter to the fourth quarter, the Chiefs created turnovers on two straight Dallas drives. The Chiefs defense comes up big when they need to.

6. Dontari Poe is indeed the man

The man deserves his own bullet point today. He put up TWO sacks for a total of 3.5 on the season. Read that again: The Chiefs nose tackle is on pace for 28 sacks.

This is the guy Chiefs fans have been waiting for since the team moved to a 3-4 defense in 2009. This is exactly who they've been waiting on. Poe changes everything about the game.

The Chiefs don't have to blitz to get to the quarterback. That's really what this is about. It's about creating advantages for your team and having a nose tackle who can rush the passer is a HUGE advantage for a defense.