Cowboys-Chiefs final score: KC moves to 2-0 after 17-16 victory over Dallas

The early returns on the 2013 Kansas City Chiefs are that they are pretty good. The KC Chiefs beat the Dallas Cowboys 17-16 in the Week 2 home opener. Alex Smith threw a TD pass to Dwayne Bowe and Jamaal Charles rushed for another as the Chiefs held off the Cowboys at Arrowhead Stadium. On the Dallas side, Dez Bryant blew up with 100 yards in the first quarter alone. But it wasn't enough for Dallas.

Share All sharing options for: Cowboys-Chiefs final score: KC moves to 2-0 after 17-16 victory over Dallas

For the first time EVER, the KC Chiefs wore red jerseys on red pants.

First play: Alex Smith lines up in the pistol and runs an option to the right.

Chiefs first drive: The Chiefs take the lead, 7-0, on a two-yard TD pass to Jamaal Charles. It was a 13-play, 77-yard drive that ate up nearly seven minutes of clock. Smith had runs of 17 and 13-yards on the first drive alone and ran the ball five times for a whopping 40 yards total. Just on one drive.

The best play of the first drive came on a 3rd-and-15 when Smith ran for 17 yards, diving over a defender to the first down marker. That 3rd-and-15 came about because of a false start on Eric Fisher.

Dontari Poe picked up another sack, crashing through the middle of the line on the Cowboys first drive. That's 2.5 sacks in five quarters for him. 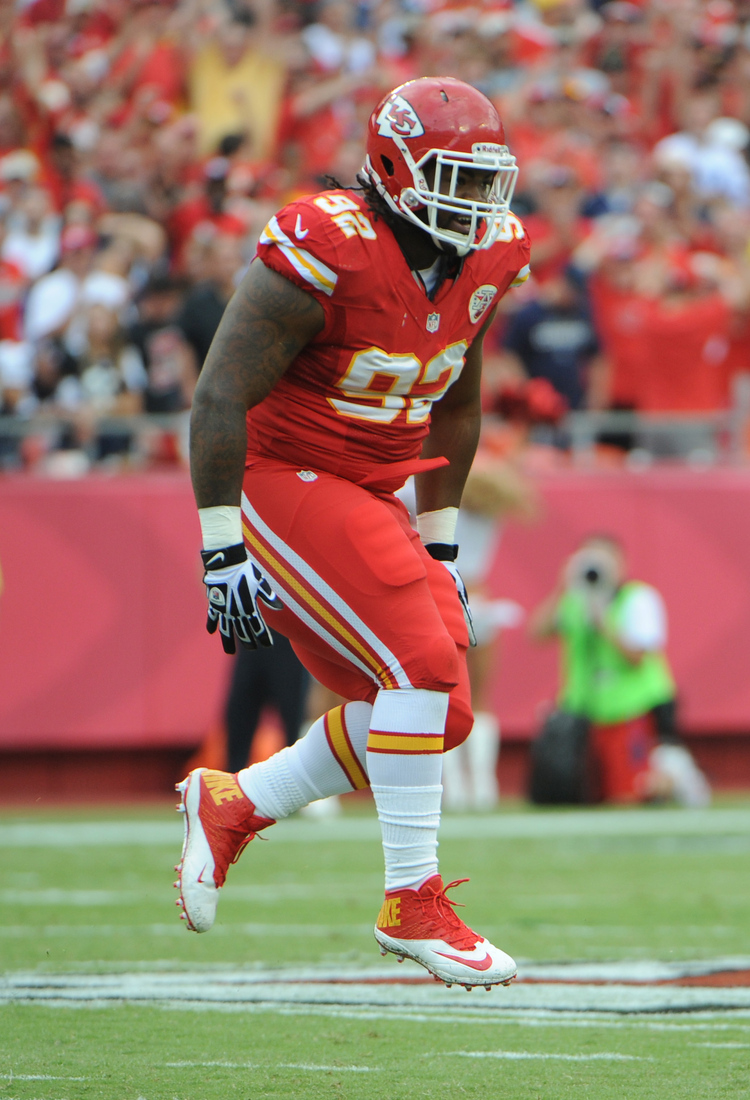 Chiefs second drive: It's cut short early after an illegal hands to the face call on Jon Asamoah on third down. Chiefs punt it away.

Cowboys second drive: Dez Bryant continues to blow up. Romo found him for a 38-yard gain, putting the Cowboys in the red zone. The catch was outstanding as Dez dove full extension for it. 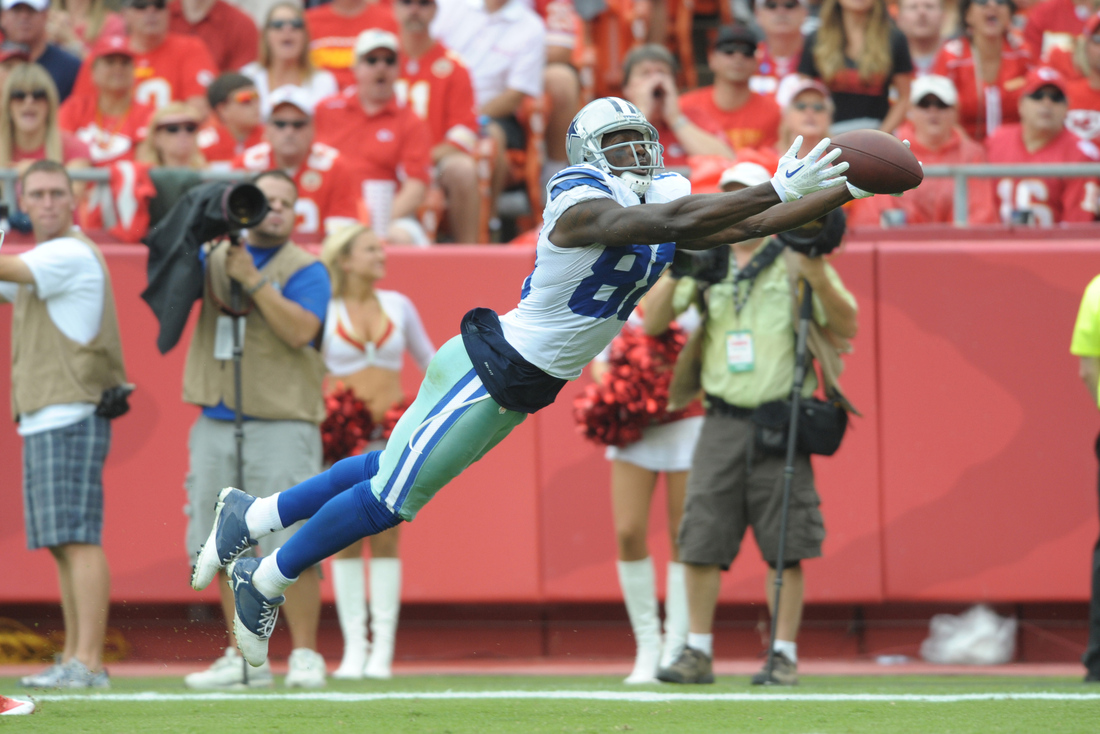 Three plays later, Romo found Dez from two yards out. Dallas took the lead, 10-7, as the first quarter winds down. The Cowboys went 55 yards in six plays and 3:20.

Dez Bryant has 100 yards on five catches at the end of the first quarter.

Chiefs third drive: Alex Smith starts off the drive with a big 27-yard pass to Dwayne Bowe over the middle, but they can't sustain things and punt it away. Good news: Dustin Colquitt pinned the Cowboys inside their own six-yard line.

Branden Albert went down with what appeared to be an arm or shoulder injury. Trainers tended to him and he exited the field. Donald Stephenson replaced him at left tackle.

Cowboys third drive: Pinned inside their own six-yard line, Dallas can't do anything and is forced to punt it away after a three-and-out.

Chiefs fourth drive: Chiefs punt it away. Alex Smith was crushed on a hit by DeMarcus Ware but got up fine. Donald Stephenson remained at left tackle with Albert injured the previous drive.

Cowboys fourth drive: Pretty much the same as the last drive. They were pinned deep in their own territory and forced to punt on a 3-and-out.

Chiefs fifth drive: Alex Smith is sacked twice and the Chiefs have to punt it away. 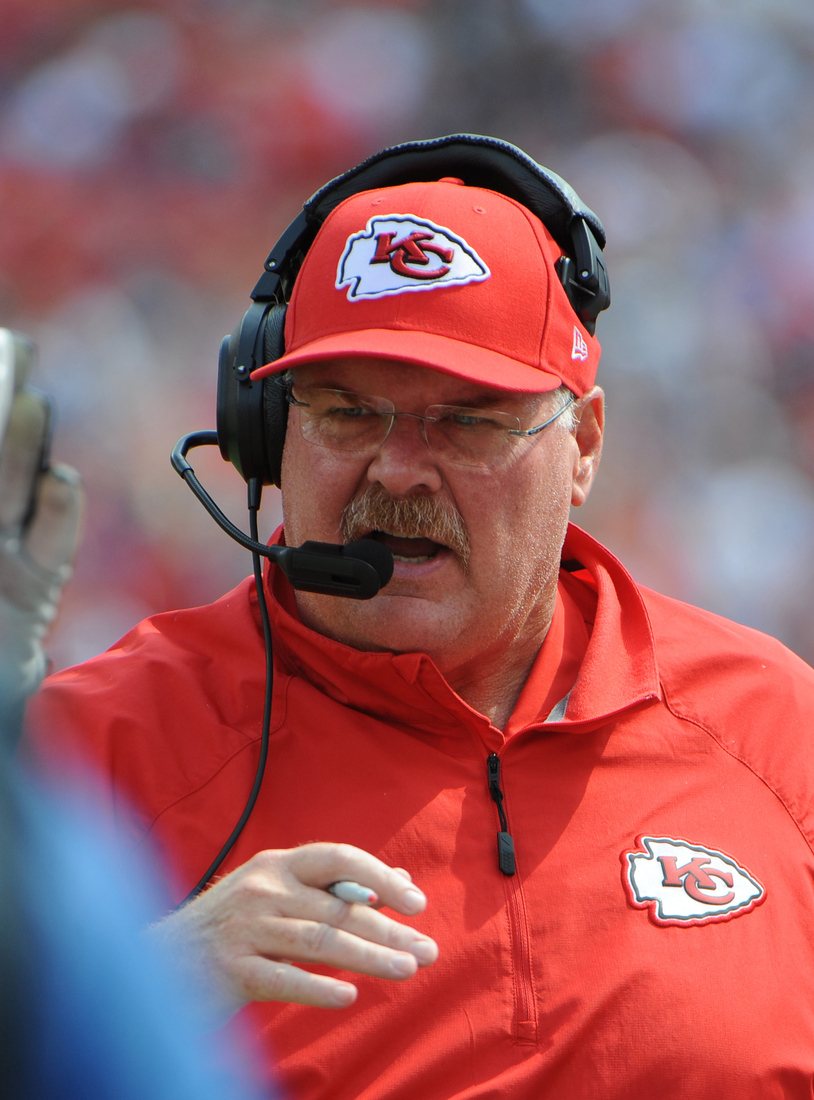 Cowboys fifth drive: Dallas goes on a nine-play drive, but ends in a punt.

Chiefs sixth drive: With less than two minutes in the half, Alex Smith begins the Chiefs drive at their own 15. He drives the Chiefs into Cowboys territory where Ryan Succop attempts a 57-yard field goal with 13 seconds left in the half. That attempt is blocked, giving the Cowboys back.

Cowboys sixth drive: Dallas downs it to end the half.

Haven't seen someone pick on Flowers like this in ... well, a long tie.

Dallas drives right down the field in 13 plays, 68 yards in 8:06. Dontari Poe sacked Tony Romo -- 3.5 in the last seven quarters for him -- which helped force the field goal. Cowboys increase their lead, 13-7.

Chiefs seventh drive: Down six and playing at home, this was a big drive for the Chiefs. They lived up to the expectations with a 10-play, 80-yard scoring drive. Alex Smith found Dwayne Bowe for a 12-yard touchdown, giving KC the 14-13 lead. 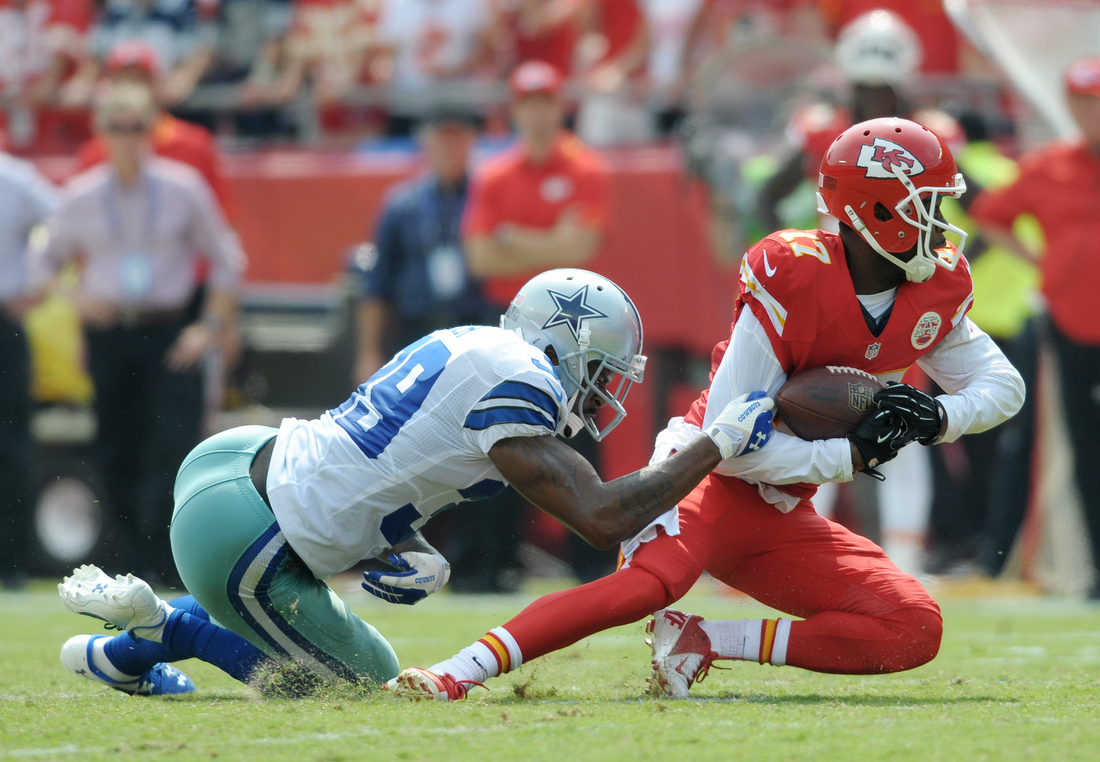 Cowboys eighth drive: Turnover! Eric Berry picks up a fumble from the Cowboys and returned it 22 yards to the Cowboys 31-yard line. The fumble was forced by Akeem Jordan.

Chiefs eighth drive: The Chiefs can't do anything but they started out in terrific field position so a field goal it is. The Chiefs increase their lead on the Cowboys, 17-13 with 14:06 left in the fourth quarter.

Cowboys ninth drive: Turnover! Tony Romo fumbled the ball on a huge third down play, leading to a turnover. Ron Parker forced and recovered the fumble. Chifes get the ball back -- up 17-13 -- with 11 minutes left in the fourth quarter.

Chiefs ninth drive: Chiefs started the drive at the Cowboys 35-yard line. On a third down, Cowboys LB Bruce Carter bursted through the line to quickly sack Alex Smith. This pushed the Chiefs out of field goal range and forced a punt. Huge play.

Cowboys 11th drive: Due to a bizarre penalty, Dustin Colquitt's punt downed at the 1-yard line was actually a touchback. The Cowboys started this drive with over seven minutes left from their own 20-yard line, down 17-13. They drove down to the Chiefs 35-yard line, and nailed a 52-yard field goal to make it 17-16 in favor of the Chiefs with 3:50 remaining.

Chiefs 11th drive: The kick return was muffed but the Chiefs somehow held onto the ball. The Chiefs were able to run the clock out for the 17-16 VICTORY! 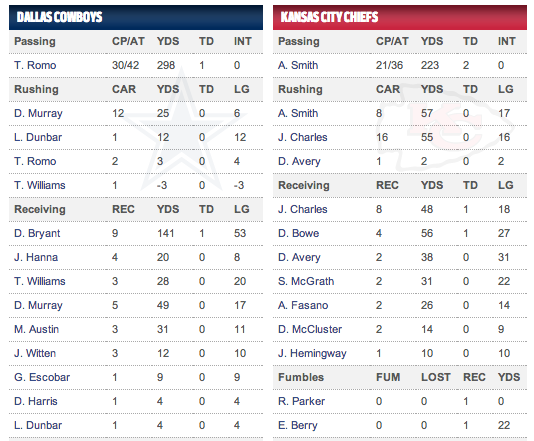