The Kansas City Chiefs first depth chart is now out. Click right here to see the Chiefs depth chart and read on for our initial thoughts below.

Share All sharing options for: KC Chiefs first depth chart: The surprises and the position battles

Travis Kelce ahead of Tony Moeaki: Anthony Fasano is the No. 1 tight end as expected. With a four-year deal and lots of money, I don't think anyone is surprised by that. It's the No. 2 spot where it gets interesting. Travis Kelce, the rookie, is ahead of Tony Moeaki, who is on the third string. My depth chart, which I try to create based on the reps each player gets, would have had Moeaki ahead of Kelce. After seeing camp, I'm less concerned about first, second or third string with the tight ends. All three of them have been not only seeing first team action but lots of targets from the quarterbacks. An important position can't have enough good players.

This is the only notable surprise to me. A few mildly interesting surprises are below. 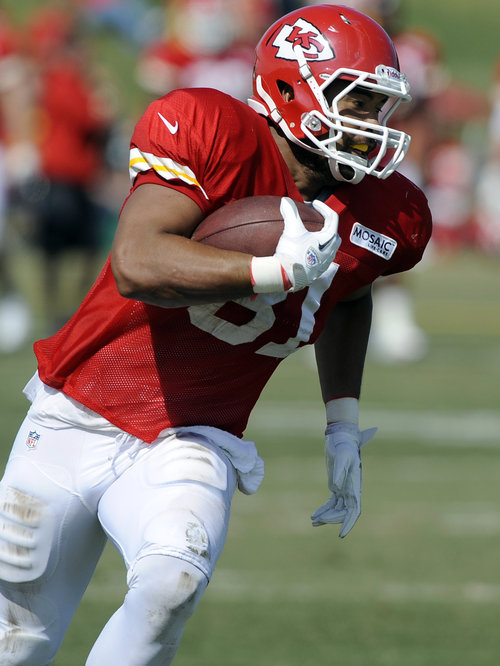 Inside linebacker: Akeem Jordan then Nico Johnson. As it has been for almost all of camp. Johnson just recently started seeing more first team reps.

No. 2 receiver: Jon Baldwin over Donnie Avery. This one just got a lot more interesting today when Avery took Baldwin's first team reps on the team work.

No. 3 quarterback: Tyler Bray over Ricky Stanzi. As expected.

No. 2 cornerback: Sean Smith over Dunta Robinson. But this is another position where Smith and Robinson are both going to play a lot. Robinson is on the field often in some fashion.

Fullback: Not surprised that Anthony Sherman is on the first team. He has been through most of camp. Braden Wilson comes ahead of Toben Opurum, which is mildly interesting given that Wilson missed a little time with an injury.

Safety: Kendrick Lewis ahead of Husain Abdullah. This position seemed more open until Abdullah went down with an injury.

Kick returner: We knew Dexter McCluster was the top punt returner. But he is also listed No. 1 at kick returner. This is a position that will see a lot of change with opportunities in the preseason.

1. Geoff Schwartz is listed as a right tackle. He can also play either guard spot.

2. Jerrell Powe, your No. 2 nose tackle. Anthony Toribio, listed at defensive end, had been ahead of him last year.

3. Sucks getting a concussion. Tommie Draheim, who suffered a concussion earlier in the week, is fourth on the depth chart at guard.

4. Demetrius Harris as a practice squad candidate? Right now, he is behind Kevin Brock on the depth chart.

5. Zac Diles listed behind Derrick Johnson at right inside linebacker.

6. Allen Bailey ahead of Austen Lane at defensive end. That seems fluid.

7. Junior Hemingway, third team behind Dwayne Bowe, is ahead of Terrance Copper.

8. Vince Agnew, an undrafted guy who has stood out, is behind Brandon Flowers and Jalil Brown at cornerback.