The Kansas City Chiefs were back on the field for training camp on Saturday morning. There was an extra energy in the crowd with Family Fun Day and over 6,000 Chiefs fans in attendance. Read on for your day 9 practice report from Chiefs camp.

I hadn't heard the official count but here ya go, from Ross Martin of the St. Joe News-Press:

More than 6,000 fans in attendance at #Chiefs camp. Another record crowd in St. Joseph

It was Family Fun Day out at camp today which meant the players were hanging out afterward signing autographs. I was going to wait around and report on who the last player to finish signing was but the Chiefs were giving away free pizza to the media. And I have my priorities. (Three slices.)

New Chiefs player on the field

Rok Watkins is his name. Rokevious is the full name. He's an offensive guard who was cut last week by the St. Louis Rams. He was drafted in the fifth round out of South Carolina just last year.

I asked Andy Reid if his signing was a result of Donald Stephenson's injury and Reid said not necessarily. Geoff Schwartz has been playing some second team offensive tackle in practice so I wondered if Watkins was brought in to be given a shot at the backup guard position that Schwartz was at before. If that is the case, Reid wasn't saying.

Also familiar with Watkins was Eric Berry, who knew him from high school. They both went to Creekside High in Fairburn, Georgia, just outside of Atlanta. Berry said he grew up in the same neighborhood and considered Watkins to be like family. The Chiefs did ask Berry about Watkins before they signed him but only something quick, Berry said.

To make room for Watkins, offensive tackle Mike Tepper was waived. He was signed just this week. 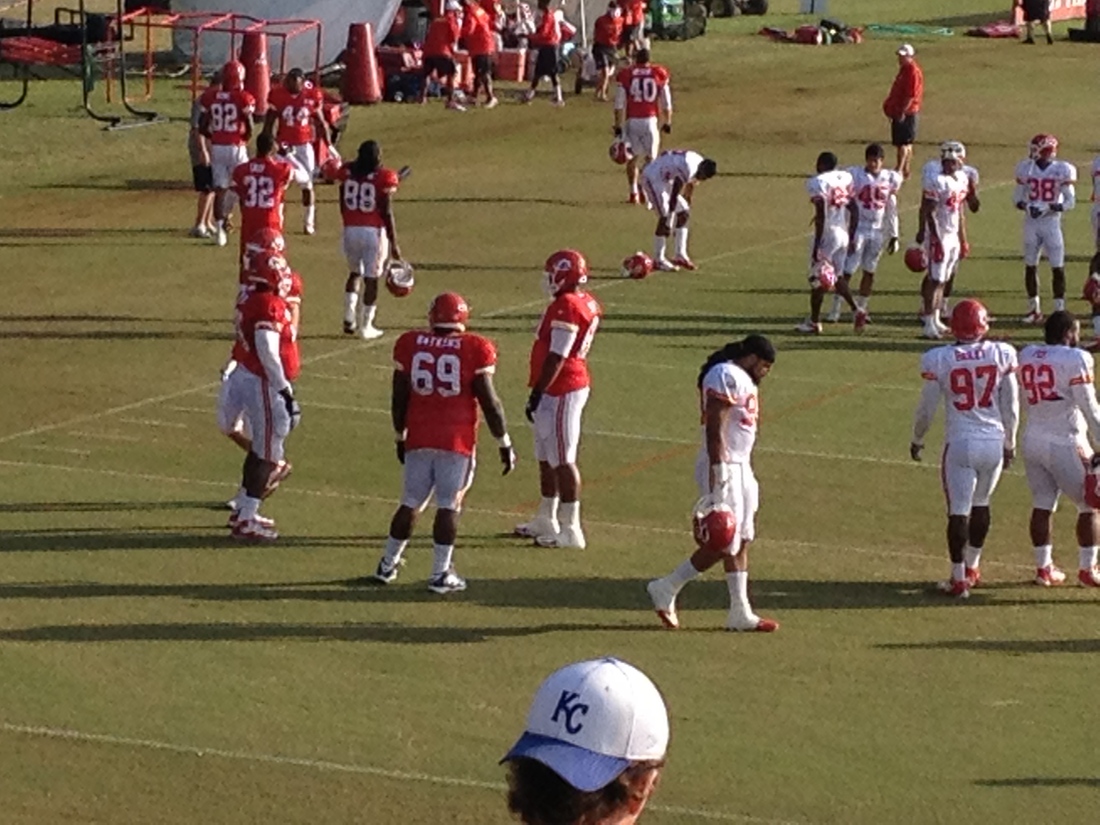 Jeff Allen continues to practice after missing time last week. Eric Berry was once again back in action as well.

Husain Abdullah was out with a groin injury from this week. Seemed like he was walking around the field the entire practice.

Mike Catapano and Cyrus Gray both remain out.

Play of the day

The Chiefs run some walk-thru stuff before moving into the team work. On one play in the walk-thru, Alex Smith went deep to Dexter McCluster with a nice pass. No one was on him, which prompted a discussion amongst the media folks in attendance whether he would have caught that with a defender on him.

Lucky for us, we were about to see that play in action.

The Chiefs moved to team work and ran what appeared to be either that same play or one very similar to it. McCluster was lined up as a receiver and his role, as he explained it to us after practice, was to blow the top off the defense -- go deep, in other words.

The ball went up in the air and Flowers was a couple steps behind, unable to make a play on it. Sean Smith's height, for perhaps the first time in camp, did not save him. The ball sailed just out of his reach and landed perfectly into McCluster's hands.

McCluster chest-bumped one coach who from a distance looked like Andre Reed, who is coaching with the Chiefs during camp.

Touchdown. And the crowd goes wild. 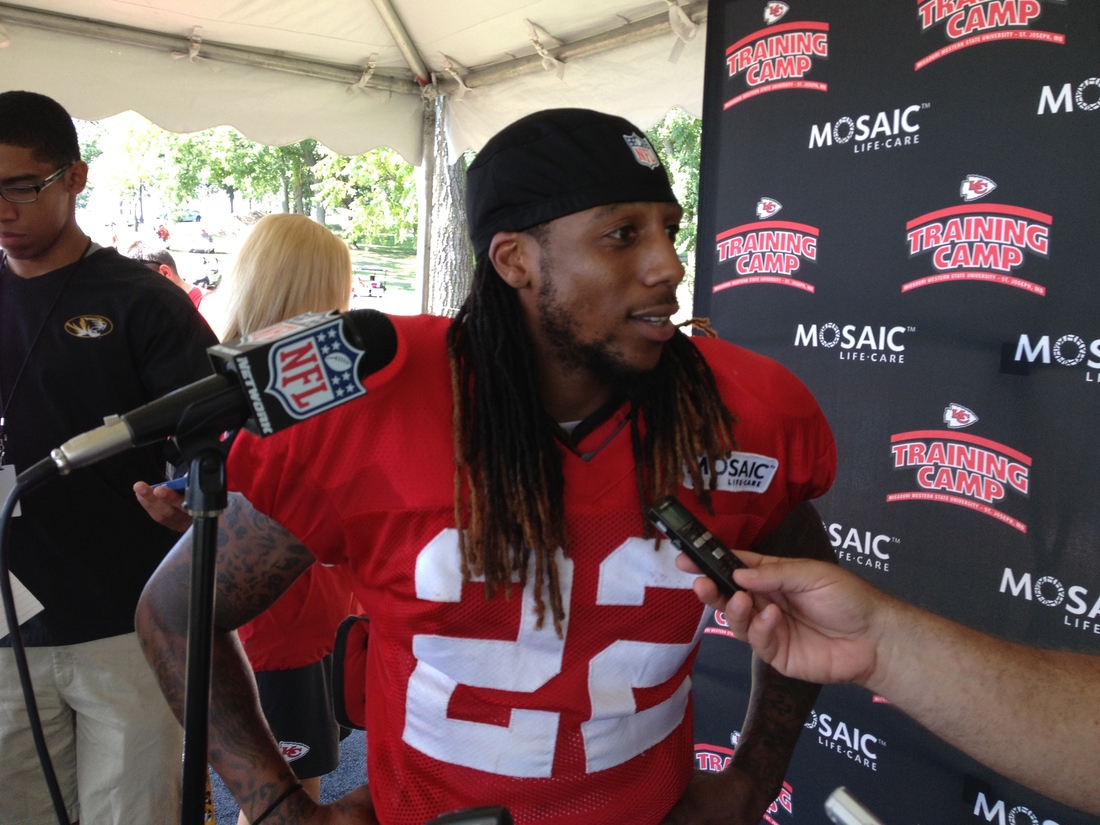 All our Chiefs camp practice reports 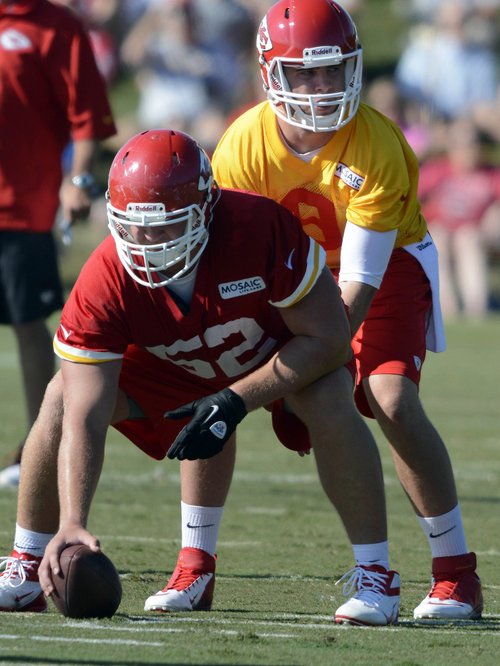 The Chiefs have had eight practices in the last nine days. Read on for our reports on all the Chiefs practices so far. 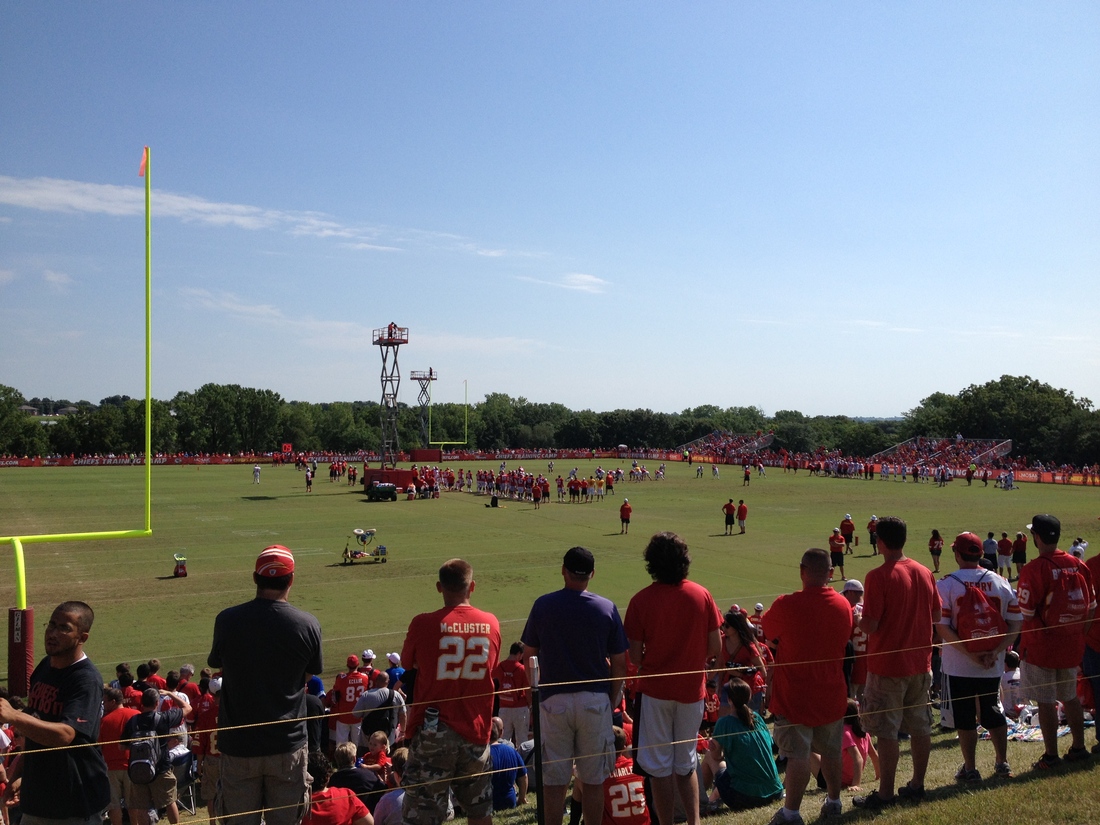 The media was standing in our little tent awaiting the arrival of Andy Reid when I saw a very familiar face about 20 yards away. It was none other than former Chiefs offensive coordinator and current Kansas football coach Charlie Weis.

Reid said that Weis came not only to visit him, but also his former Kansas players and the players that he knew while coaching the Chiefs.

Huge mistake by me not getting a picture of Weis. He slipped past me!

Quote of the day 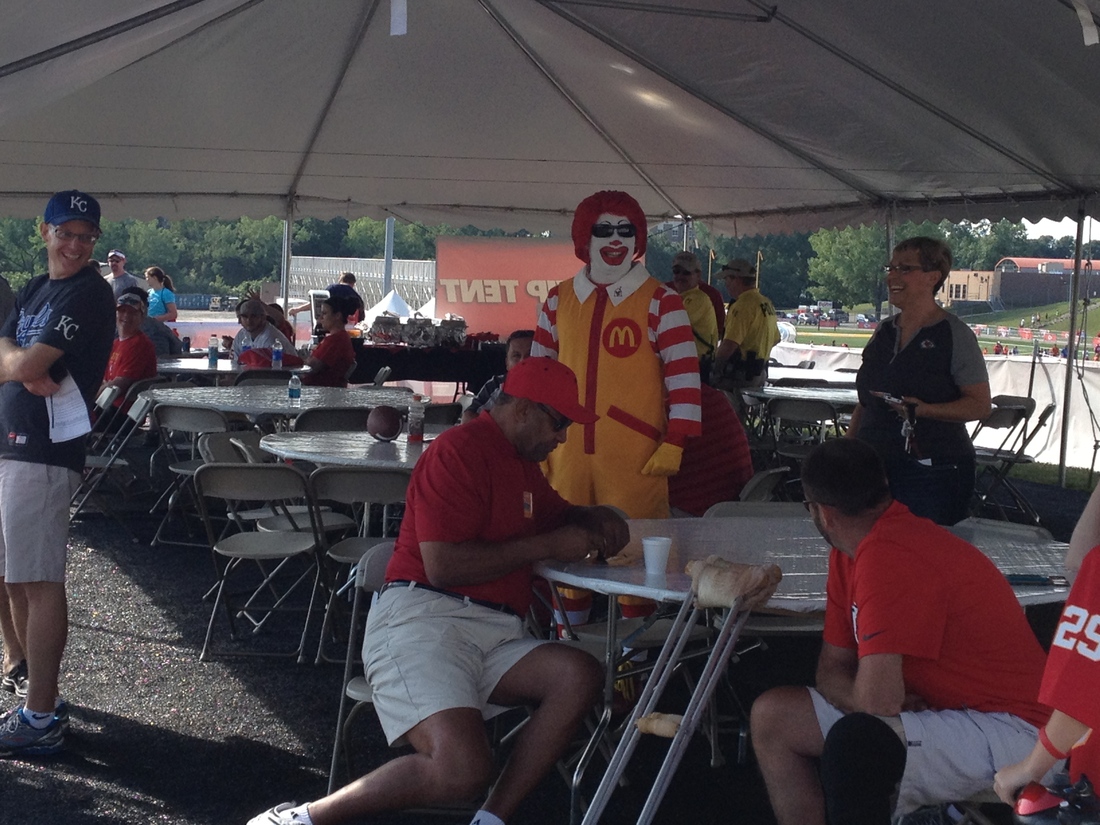 Jersey of the day, part 1 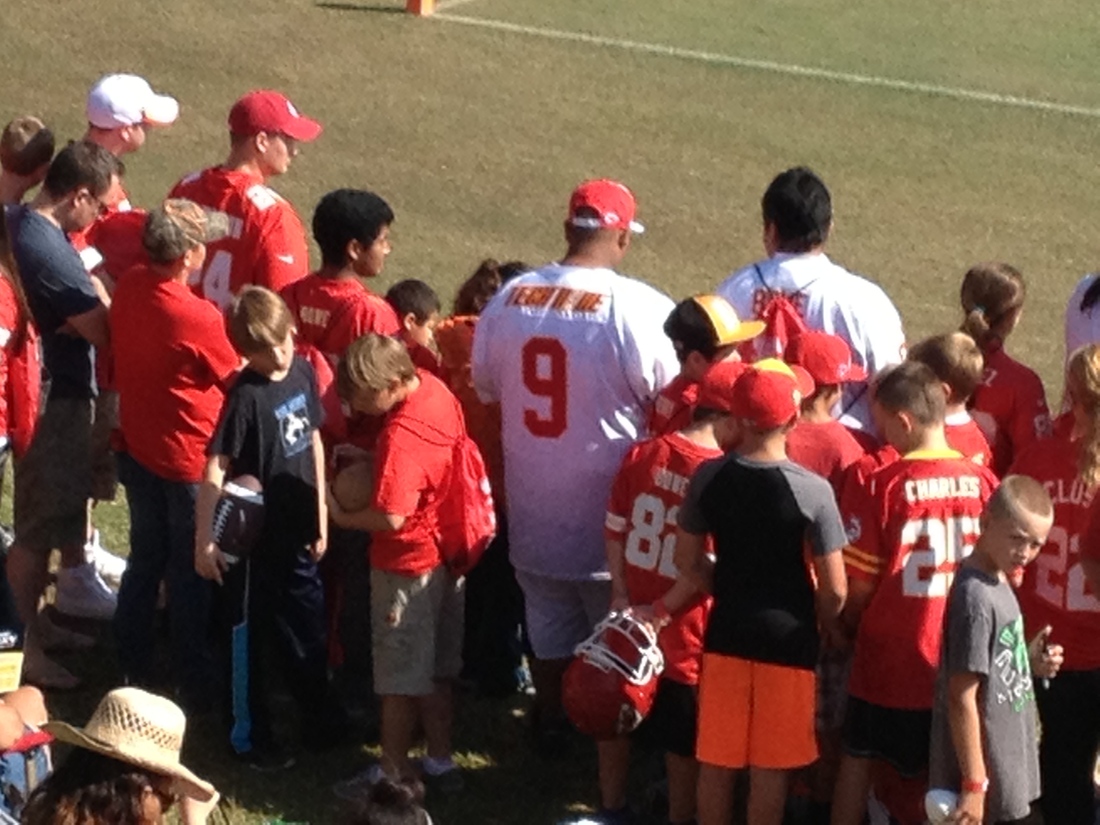 Jersey of the day, part 2 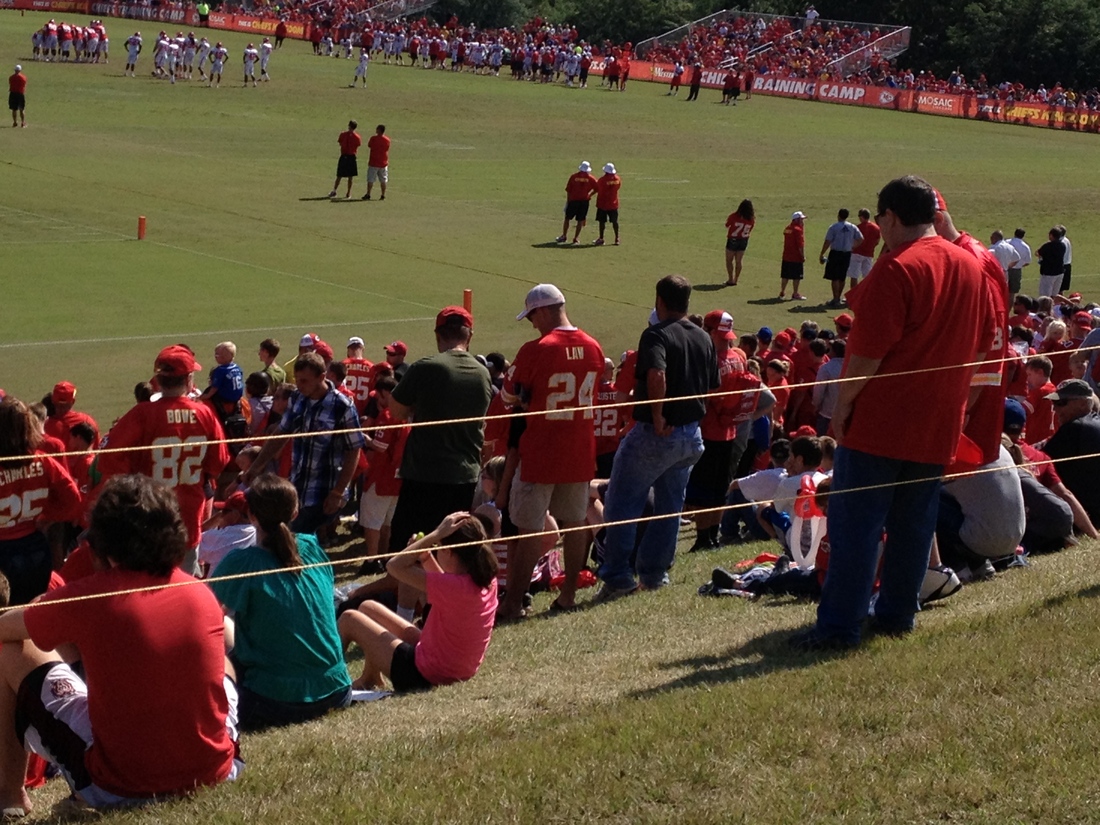 Best photo of John Dorsey while he's not looking 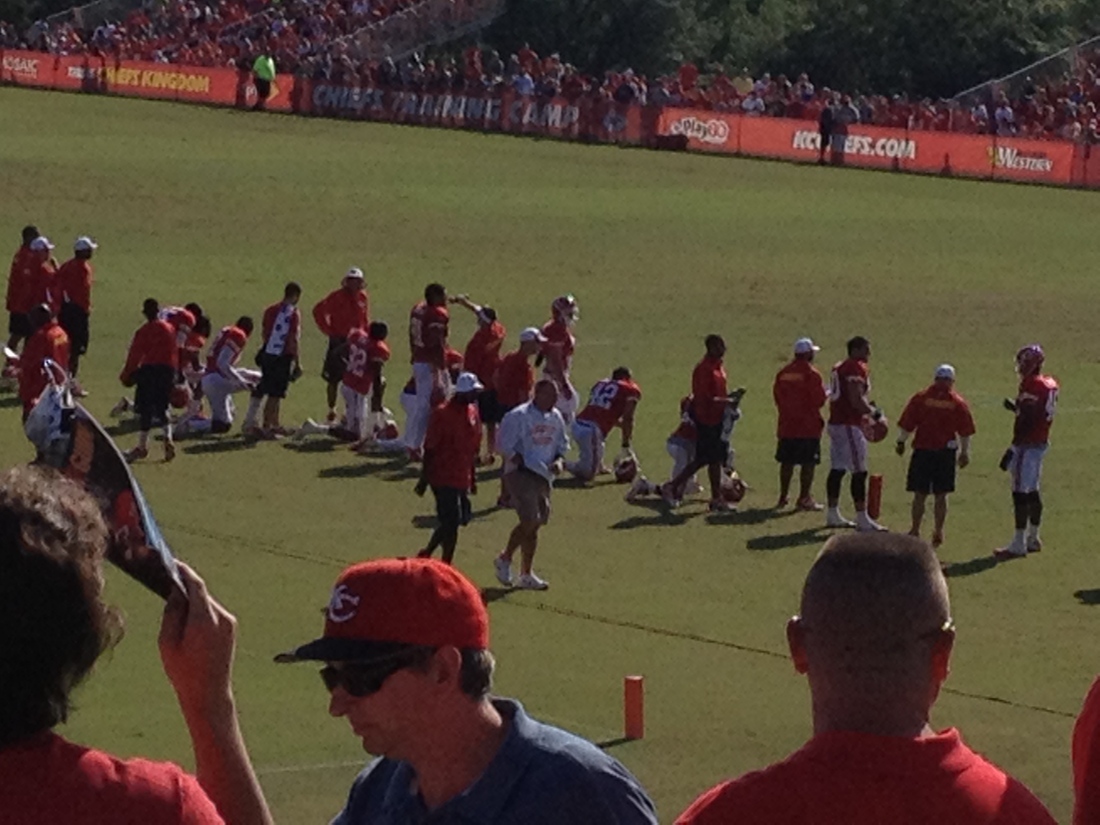