The only way the Kansas City Chiefs were going to make the Jon Baldwin-AJ Jenkins trade is if they felt Donnie Avery, who replaces Baldwin, was a "legitimate starter", according to Andy Reid.

Share All sharing options for: Chiefs' Andy Reid views Donnie Avery as a 'legitimate starter' in the NFL

The Chiefs view Donnie Avery as a "quality" or "legitimate" starter.

"One of the things John [Dorsey] and I talked about, we knew AJ is going to have to come in and learn, so we had to feel comfortable that Donnie is a legitimate starter and we felt that," Reid said. "We felt that when we brought him here and then we felt it since he's been here that he can be a quality starter on our football team. We were able to do this and feel comfortable doing it."

Andy Reid's reaction to the trade 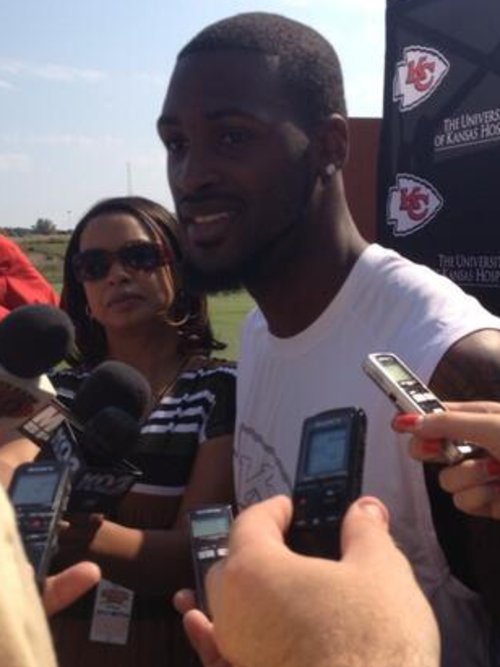 Five things to take from this...

1. AJ Jenkins is not going to come in and contribute right away, and the Chiefs realize that. He will need time to learn.

2 In the next few weeks there will be opportunities to add more receivers. On August 27, all 32 NFL teams will cut at least 15 players to get down tot he 75-man limit. Four days later, every NFL team will cut 22 more players to get down to the final 53-man roster. Receivers will be cut during that time and the Chiefs will have an opportunity to sign them.

3. What Reid said above about Avery means that while the Chiefs could sign another receiver ... they don't have to. It's possible (some might say likely) that the Bowe-Avery combination is how it will play out this season.

4. Reid said that he thought Avery was capable of starting even when they signed him in March. Presumably they at least figured that Baldwin not making the team was a possibility back then. "Donnie has tremendous speed and he has a lot of experience," Reid said, "and he's shown in this offense he can do some nice things."

5. Remember Reid said that the Chiefs offense has some things that Alex Smith did last year in it. I assume that means there are some familiar things for AJ Jenkins as well. And Donnie Avery told us that the offense is similar to one he ran in St. Louis.