KC Chiefs head coach Andy Reid called the Jon Baldwin-AJ Jenkins trade a "fresh start" for both players. Read on for more Reid and AJ Jenkins on the trade.

Share All sharing options for: Chiefs' Andy Reid on AJ Jenkins-Jon Baldwin trade: 'Sometimes a fresh start can be good'

Will the KC Chiefs and Francisco 49ers trade of Jon Baldwin and AJ Jenkins work out for both teams?

While he said "it didn't work out for [Jon Baldwin]" in Kansas City, he thinks a fresh start could be good for both players.

Reid went on to say that Jenkins and Baldwin have "similar situations" but their game, and their strengths and weaknesses, are different.

Can we question the new regime? 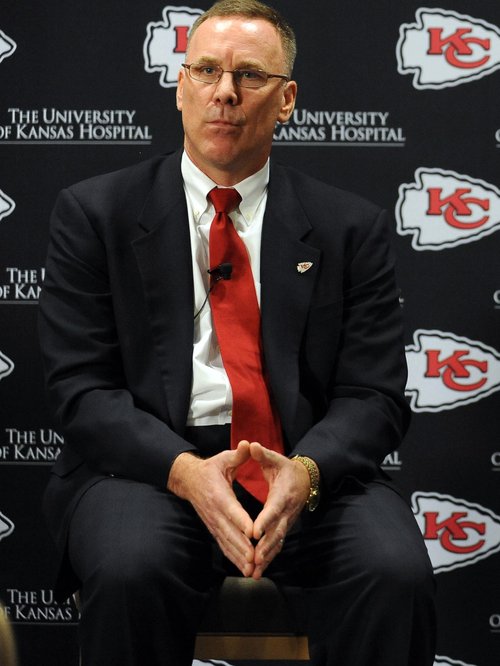 "What San Francisco is looking for, I think Jon will fit right into that program and what we're looking for here with AJ, I think he'll fit in and it'll give both of them a fresh start on their careers. I look forward to working with AJ and I wish Jon the best of luck with his new start there."

Reid went on to explain the fit on both sides.

"[The 49ers] lost a big powerful receiver for a time in [Michael] Crabtree, and Jon fits in that role," Reid said. "We needed a little bit extra kick in there and we'll see if AJ can't give us a little bit of additional speed."

I asked AJ Jenkins if Reid had told him his role yet and he said he had not because he had just arrived in Kansas City. But Reid, who said he studied Jenkins "extensively" while he was at Illinois, pointed to his speed when asked about his strengths.

Then I asked Donnie Avery if speed was his strength as well, and he agreed that it was. They're both "speed" guys.

Reid also confirmed what the Chiefs depth chart told us earlier this week: Avery is the new starter with Baldwin gone.

"Avery is the starting X right now so that's how we'll start," Reid said. "AJ will get his feet wet. He'll learn what's going on and we'll see how things work for him there."

The takeaway on the initial reactions is that this is a "fresh start" for both sides. And no one was guaranteeing that it would work out, as Jenkins' placement on the third team suggests.