This week, KaloPhoenix tries to keep up with all the different formations that Bob Sutton uses, continues his Eric-Berry-at-linebacker crush, and is impressed with the secondary.

Well, Week 2 of the Kansas City Chiefs preseason has come and gone, and I don't know about you guys, but I'm ready for the real thing. Last week, I covered the first team's sole drive and went play-by-play through it with descriptions and pictures. This week, I'll get down to more of what you AP readers can come to expect during the season:

The idea of these posts throughout the season is to give the reader some extra talking points outside of the normal tackles / sacks / interception statistics that tend to dominate the conversation (not that those aren't important, but you get what I'm saying). Also, as I do every year, I'd like to remind you that I am FAR from an expert on the topic, and if you think I'm incorrect about the way I saw a play or my assessment of a player, please feel free to discuss it in the comments. This is meant to be a discussion point: not a black-and-white interpretation of exactly how the game went.

With that out of the way, let's get onto the game! 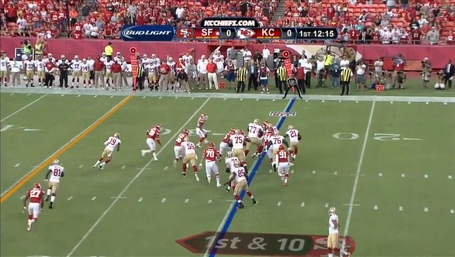 As we are all aware, that didn't happen. Instead, Tamba inexplicably cuts inside the pack of players, leaving backside contain to...uhhh...nobody. 52 yards later, Gore is finally brought down. Not a good start. 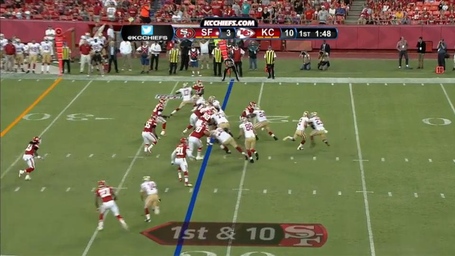 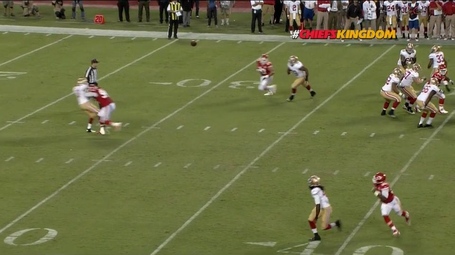 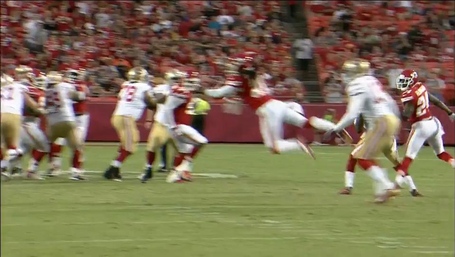 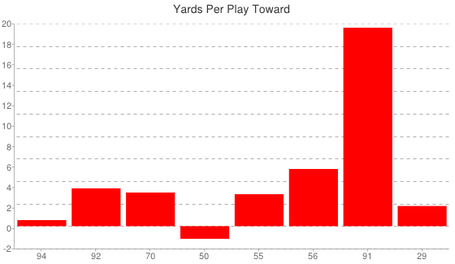 Looking at the chart, you can see the large number sticking out from Tamba. He ended the half with 19.67 YPPT, though most of that came from the 52 yard run to start the game. DJ was the only other player about 4 YPPT, and Justin Houston led all players with -1.5 YPPT through four plays at him. Tyson Jackson also had an excellent day with 0.6 YPPT through five plays at him. I'm going to keep saying it as long as I keep seeing it: You can't run on TJax and Houston. 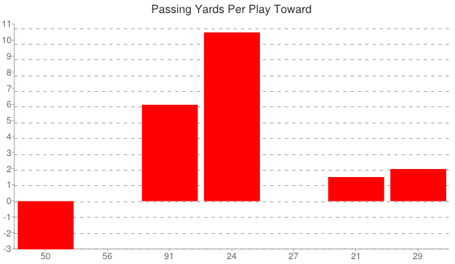 Once again, one player sticks out, and this time, it's Brandon Flowers. He was thrown at twice, once was incomplete, and the other was a 21 yard gain. DJ and Sean Smith were both thrown at, and neither allowed a completion...although Smith did have a pass interference call. Once again, Justin Houston led all players, with -3 PYPPT...although that was only one pass, as noted above.

Akeem Jordan led all players with two missed tackles. DJ, Tamba, and Flowers each had one.

Tamba had one QB pressure.

Sean Smith and Dunta Robinson each had a pass broken up.

Justin Houston had two incredible tackles for loss. Poe and Berry each had one.

The things that stick out the most are Justin Houston, Eric Berry, and the secondary. Houston was a FORCE in the run game and did well when called upon against the pass. Eric Berry (as Joel pointed out) had a ridiculous series where he blew up an entire drive. He looked sharp on others as well, and his continued usage as a weapon in the defense is inspiring for the upcoming season. The first-team secondary allowed a total of 24 yards passing. Sure, it's preseason, and the Niners pulled their starters early, but it's nice to see that this team can handle the challenges put before them. 24 yards is excellent...especially considering 21 of those yards came from one play toward Flowers.

On the negatives, Tamba's run game still needs some help, but that might be something that Sutton realizes and shifts Devito as the season goes along. DJ's playing slower than we've seen in the past, but like I said last week: we all know what he can do. No reason to freak out at the moment. Runs against the grain of the defense and quarterback scrambles didn't look good, so let's hope that too gets remedied.

As always, it's hard to take anything definitive away from a preseason game, but you have to play the teams put in front of you, so it's good to see the numbers and players look good and stay healthy. Points were given up on a big run and back-to-back penalties, so a little cleaner execution helps with at least one of those drives. Here's hoping for a little more time next week against the first team and continued success.

Bob Sutton: Jack of all trades