The San Francisco 49ers beat the KC Chiefs 15-13 in Friday's second preseason game. AP contributor MNChiefsfan takes you through the highs and lows of the game.

My oldest son wanted to read me a book the other day called, "Fortunately."  It's basically about this kid that is supposed to do something (I can't recall what), but a bunch of crap happens to him (can't recall what there, either. I may need to pay more attention to non-Chiefs-related stuff). A lot of the stuff that happens is bad, but then something good happens to bail the kid out.

For example, "Unfortunately, the store was full of flesh-eating zombies. Fortunately, Mike had a chain saw handy."

(OK, that's not actually from a book I let my kid read. I'm not insane. Put the phone down, no need for social services here. It's just an example)

Watching and re-watching the Chiefs game Friday night, I couldn't help but think of that book. Because a lot of fortunate and unfortunate stuff happened. So let's explore the Chiefs-Niners preseason game kiddie-book style.

Some fans I've talked to are convinced that the Chiefs defensive line is going to be the weak link that prevents the defense from taking the next step (or rather, the next five steps, considering the struggles last year). I happen to not be one of them, but those doubts being voiced caused me to take a very close look at Tyson Jackson, Mike DeVito, and Dontari Poe Friday night. The Niners rep one of the toughest, most mauling lines in all of football. The played several series against the Chiefs (19 snaps for all but Staley), so we got a chance to see some action there. 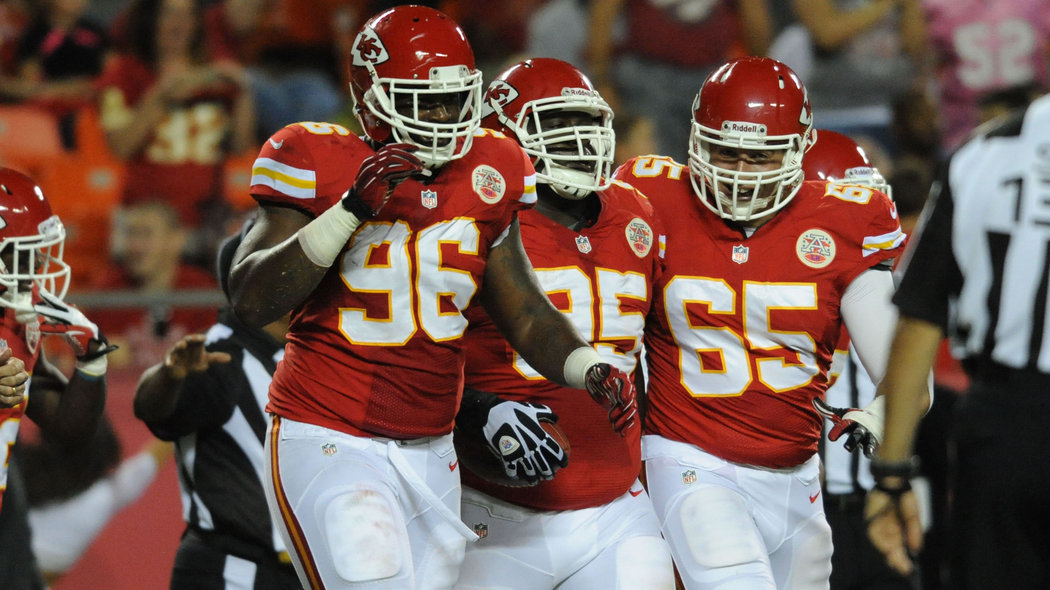 I'm happy to report that the Chiefs front three stood tall against a stout group. In fact, they did better than that. They were basically immovable most of the night. I was worried Poe in particular would wilt after getting every Chiefs fan excited last week. He did not. TJax did a great job, and DeVito showed in a game featuring the guy he replaced (Glenn Dorsey) why he's an upgrade. The DL did well, and that's very good news for our team this season.

The Niners rushed for 160 yards on 37 carries. On the surface, that's a rough game. Of course, 52 of those yards came on a play that should have been a loss of a couple yards (or at least no gain, given Frank Gore's ability to shake tackles).

The very first play for the Niners, they send Gore right, only to find absolutely nothing there (TJax, Justin Houston, Poe, and others doing work). Gore strings it out looking for a hole. In the meantime, Tamba Hali and my DeVito, for reasons known only to them, sprint ahead to where they believe Gore will be running. 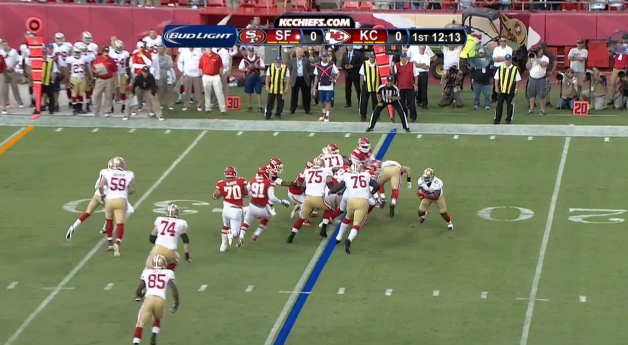 Of course, there are already 17 or so Chiefs defenders there, so there was no reason to do this. Gore, being a vet, sees the wide open space left by Hali and DeVito and calmly cuts back, gaining 40 yards before any Chiefs are really even near him.

Aside from that lone run, the Niners leading rusher was Colt McCoy, who took advantage of the Chiefs pass rush losing contain (maybe they're so used to not getting any pass rush they kinda forgot?) and scrambled for 37 yards on four carries.

In other words, if it hadn't been for a few silly, preventable mistakes by the defense, the Chiefs would've held the Niners to something like 2.5 YPC. Ouch. Gore's run was obviously the biggest problem, since it directly resulted in a FG and was easily the most preventable of the mistakes. DeVito and Hali were both at fault, but Hali's mistake was the most glaring. If he would've just kept running straight toward Gore and kept his side contained, that play goes nowhere. This can be the price you pay with an aggressive defense, but I'm glad a GLARING mistake like that happened in preseason. So Andy Reid and Bob Sutton can point to it and say, "Guys, this can't happen."

I cannot believe how lights out the special teams has played this preseason. The coverage has been excellent, and that alone has been a nice change. But the blocking on returns has been incredible. Quintin Demps isn't known for being a great returner, but he sure knows how to follow his blocks and has a LOT more open field speed than I thought he did.

The Niners have a good special teams unit, and the Chiefs dominated them in that aspect of the game, out-gaining them by nearly 200 yards. They returned zero punts. Zero. Because with Dustin Colquitt kicking and good punt coverage, you don't get a chance at returns. The Chiefs gained 61 yards of field position in the punting game. And of course, seven points in the kick return game.

I've already said I think special teams will swing at least one or two games the Chiefs way this year, and I feel even more strongly about it now.  Remember those Chicago Bears teams of the last  decade? An offense that consistently underachieved, but they still managed to win tons of games in large part because of their defense and... an elite special teams unit. I get that the Chiefs don't have Hester, but the more I see of Dave Toub's unit (that came out wrong) the more I think Hester, while great, owes a ton to Toub. What a great hire. The Chiefs even blocked an extra point!

Unfortunately, we had a punt blocked

Crap, just when I was praising the special teams coach.  Except...

Fortunately, it was because of a stupid error rather than a blocking breakdown

When I went back and re-watched the game, I saw why a Niner was able to sprint toward Colquitt unhindered.  It wasn't a blown assignment. Well, it kinda was I guess. We only had 10 men on the field. I counted and re-counted. 10 guys.

AP's Joel Thorman asked Dave Toub about the return game following the first preseason game against the Saints and he said it was a successful day because they had all 11 guys on the field each time. In preseason, with a lot of moving parts and new players, that can be a problem.

I don't know whose job it is to keep track of such things, but I imagine someone just blew it getting out onto the field. I can't get on Toub (seriously, I need to stop phrasing things like this) for such a freak occurrence. Unless it happens again. Which I don't think it will. I think the special teams will continue to be a powerhouse

Unfortunately, the first team offense didn't do much of anything, despite the Niners pulling many of their first teamers early.

I can't say I'm not worried about the Chiefs offense. The OL especially seemed overmatched by the blitzes they were facing. To be fair, I don't think they were expecting to see that in preseason, but still. You gotta adjust eventually, and some blame needs to fall on Alex Smith and Andy Reid for not appropriately adjusting to what was happening out there.

Fortunately, Jamaal Charles wasn't playing, and Knile Davis looked a lot better than he had previously

The one thing I keep coming back to is that the best player and the guy Reid is building the offense around was out.  It's tough to say, "This offense is terrible" when it's missing it's most important ingredient, a guy who is literally a game-changer.

Good news: Jamaal is back to practice

While Davis wasn't great out there, he looked more decisive to me, and definitely looked more natural catching the ball and moving with it in space. There is just so much physical talent there. If he's improved with his decisiveness this much again next week, I'll be ready to jump off the bandwagon bashing our use of a third rounder to pick him up. He's definitely got the speed / moves to sub in for JC without having to run totally different plays to be successful.

Before everyone jumps on me, I'm not saying he was awful. He said it wasn't very efficient. He was definitely let down multiple times with some really, really inexcusable drops. Cyrus Gray, Travis Kelce, and Jon Baldwin all dropped passes that absolutely should have been caught, and all of them were drive killers. Smith even had bad luck on a shot downfield when Baldwin got his legs tangled up and couldn't make it to the end zone. The ball ended up hitting the back of the end zone, which puts it pretty much right where you want it to be for a jump ball with a guy like Baldwin. It was a bummer, because it was really nice seeing him take a risk.

However, a lot of the pressure was coming from blitzes, and it's a QB's job to recognize those blitzes. Also, I thought he looked to have a little case of happy feet after awhile. All can be fixed, but it wasn't his best outing.

I've been thinking for awhile now that Smith could play a huge role in determining how good the Chiefs defense is this year.  If he plays press coverage all year like he played it Friday night, other teams' top two receivers are going to have problems getting open. Also, being able to leave Smith alone against receivers will allow Bob Sutton to do all kinds of crazy things with the blitz. Which he seems very inclined to do. Plus, it's really going to make receivers hate playing the Chiefs after they've been bumped and hit and hassled all day.

Unfortunately, the Chiefs may have a problem finding a starter at SILB

Yes, I'm psyching you out here, because...

Fortunately, the reason they have this problem is that both Akeem Jordan and Nico Johnson are outperforming expectations

After talking to Eagles fans I thought the Chiefs might have managed to snag a decent player in Jordan. And many here were excited when Nico was snagged in the 5th 4th round. Both are playing very well. Nico already looks like the leader of the second team defense to me, and Jordan is showing us just how far the Chiefs have been from competent SILB play the last few years

The LB corps is going to be nasty this year. I won't be surprised if both guys see the field quite a bit with the way they're playing.

Unfortunately, Travis Kelce can't seem to hang onto the ball

Kelce is clearly a freak athlete for his size.  He almost managed to match Demps' speed on the TD kick return. He's leveling guys blocking on special teams (which I love). And you can tell he could add a whole new dimension to the offense. IF he starts hanging onto the ball. From what little tape exists of him in college, his hands aren't an issue. Now he needs to show that on the field in the pros. Because his ceiling at TE is twice as high as anyone else we've got.

Fortunately, there was a land shark sighting

That's right, a sack by Jerrell Powe!  He was solid all the way around (preseason superstar again), too.  Could it be my lame attempt at a reverse jinx actually worked?  I need MOAR land shark!!!! 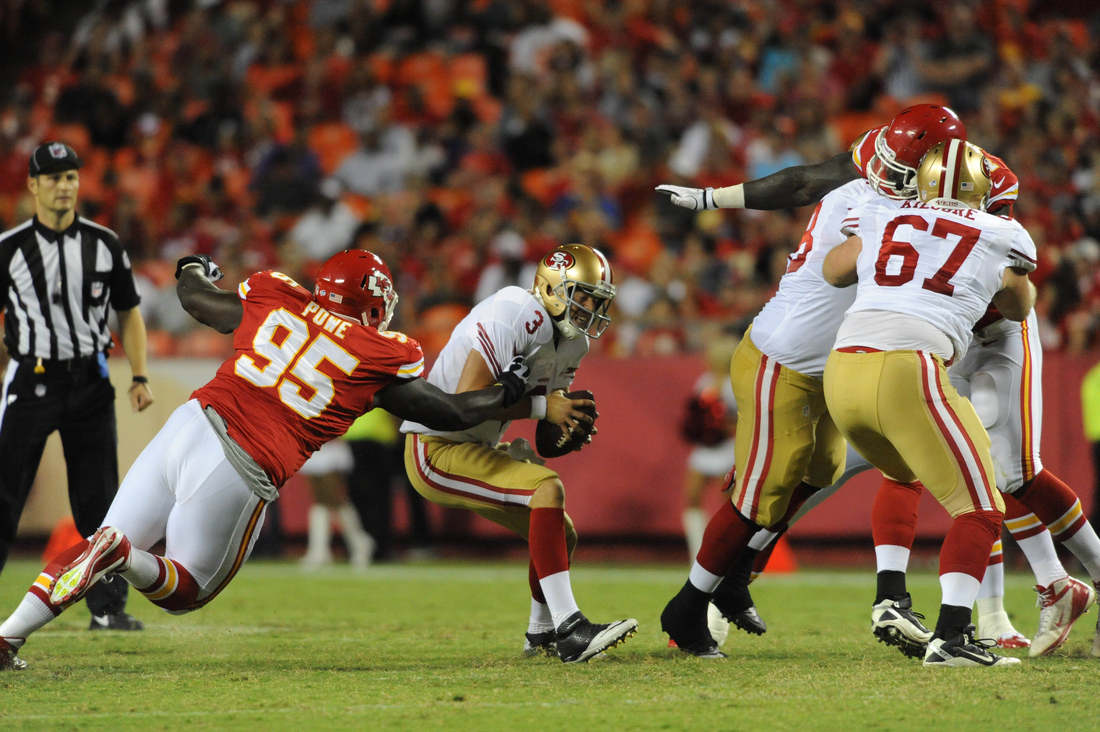 Unfortunately, it's another week until the Chiefs get a chance to wash off this "meh" performance

It's going to be a struggle for me this week, wondering if what we saw was a bad omen for things to come.  Really, when I look back at our second preseason game last year (a much more "blech" performance against the Rams), I'm not too worried.  Except when I'm worried.

Fortunately, the Broncos got absolutely destroyed 40-10 on Saturday.

So that's gotta put a smile on your face in the meantime, amirite?