Kansas City Chiefs RB Jamaal Charles was "carted off" at Monday's training camp practice in St. Joe but it was just a foot strain, according to Chiefs coach Andy Reid. X-rays were negative.

KC Chiefs running back Jamaal Charles went down with an injury in Monday's training camp practice but it does not appear to be serious. According to reporters at camp, including Nick Jacobs of Metro Sports, it is a "foot strain" and x-rays were negative. 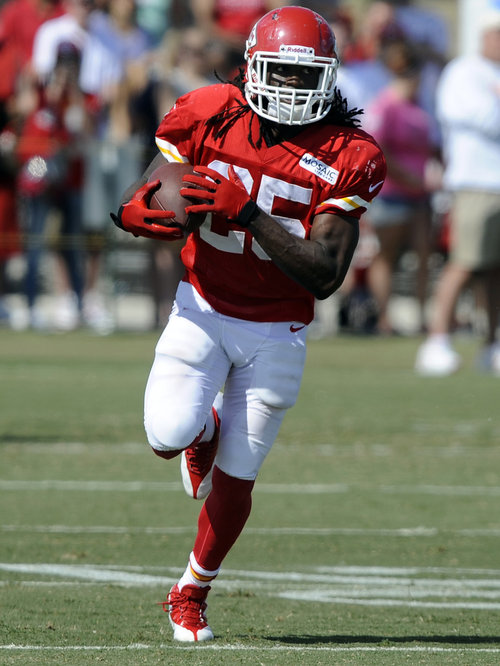 According to other reports, it is his left right foot. The important part here is that x-rays were negative. A foot strain could potentially keep him out for a few days but it does not sound like something that will keep him out for multiple weeks. I can't say that for sure though, just basing it off of what we know, which is that it's a foot strain and x-rays are negative.

We'll wait for more updates on Charles as the week goes on. The Chiefs play the 49ers on Friday night for the second preseason game.

Reid said if Jamaal is healthy he will practice and will play Friday if injury allows. #Chiefs

I don't need to tell you all how important Charles is to the KC Chiefs success in the 2013 season. While Alex Smith and Andy Reid are the new Chiefs in town, Charles remains one of if not the most important piece of the team's success next season.