Yes, it's the preseason, but the Chiefs defense stuffed Drew Brees and a potent New Orleans offense on the first drive using different looks and new wrinkles.

Welcome to the NFL Preseason, where the games are made up and the points don't matter.

Friday night, we got our first chance to see the new-look Kansas City Chiefs, and with Joel recapping the first team offense, I sat down and re-watched the first team defense.  Yes, it was vanilla, and yes, they only blitzed once, but some players really flashed and some formations gave us an insight on how "attacking" this new 1-gap defense could be in 2013. 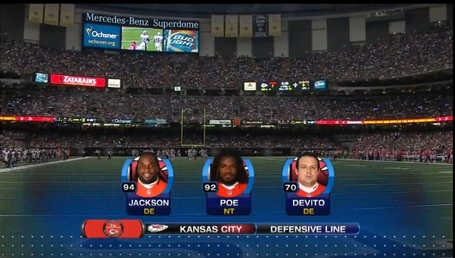 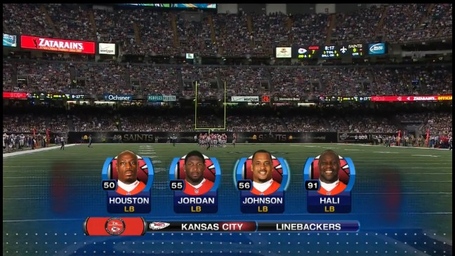 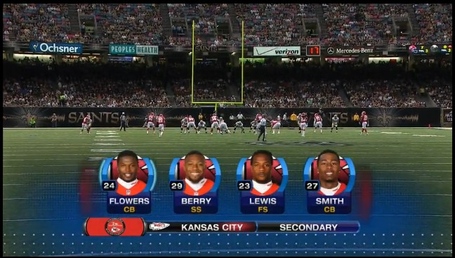 Let's get onto the plays!

First play, the attacking style is very apparent. The run play was off tackle to the strong side of the defense, and both Mike Devito and Dontari Poe were chasing from off the ball. Devito lunged and tried to make a play in the backfield, and Poe came across the play to make the 1-yard tackle. Props to Tyson Jackson and Justin Houston for driving their blockers 2 and 3 yards into the backfield, respectively. The running back didn't have much of anywhere to go.

The next play, the Saints ran up the gut. Poe got double teamed immediately and promptly got shoved out of the play and into the two inside linebackers. One of his blockers peeled off and got to Derrick Johnson to take him out of the play, and Akeem Jordan stood the fullback up, but it was 4 yards downfield. Jackson tried to move laterally across to fill the gap, but was too late to get to the play in time for a short gain. The run went for 6 yards. 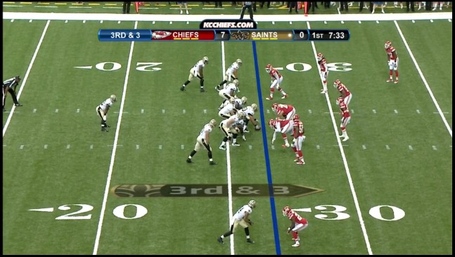 The first sub-set package surprisingly does NOT go to Poe and Allen Bailey, but instead has Jackson and Devito lined up inside on a 3rd and 3. The Saints are lined up with 3 wide receivers, single back, and a split out tight end...although Jimmy Graham's a monster, so it might as well be a 4 WR set. Eric Berry IS in the box, but for the first time in what seems like forever, the Chiefs are playing with 2 deep safeties, bringing on Quentin Demps back with Kendrick Lewis. Dunta Robinson is also in as the nickel corner. This is a package that should be strong against the run, while still having the ability to cover the pass well. That's right, Arrowhead Pride faithful: I am satisfied with Eric Berry playing linebacker in THIS dime defense. Shocker.

Onto the actual play, the Chiefs rush four, without much success. Drew Brees' hot read is Jimmy Graham who wasn't covered at the line of scrimmage. However, at the snap, Demps makes a beeline for Graham. Brees sees Graham open in the flat, but realizes that Demps has him tee'd up, and pulls it back. DJ chips Watson as he runs by, but Sean Smith is in soft coverage, and Brees finds Watson in a hole for a gain of 7 yards. You can see Dunta and Smith discussing the coverage after the play...looks like there might have been a called switch there that just got missed.

Same sub package for the next play, once again, the Chiefs only rushing four. The Saints are in the shotgun, still with a single back and with the 3WR/1TE set. A little better pressure from the outside by Hali this time, but still nothing much to speak of from the inside. Darren Sproles and Graham run 1 yard/5 yard crossing routes in front of Berry and DJ, who switch off, but DJ is a little behind Sproles...could have been a good gain if Brees dumped it off. The slot receiver runs another crossing route at 10 yards, but Dunta has him well covered. The wide-outs both run a fly route, with Sean Smith having good coverage, and Brandon Flowers giving his man a step. Brees goes for the home run over Flowers, and the receiver drops it. Might have been a slight shove on Flowers to gain the space, but no flag.

The Chiefs are back in the 3-4 defense, and the Saints are lined up in a 2TE strong side overload, with the receiver motioning into the overload. Right off the bat, the defensive line stands up the offense for a wall, but doesn't gain any penetration. Akeem Jordan does a FANTASTIC job of disengaging himself from the guard about 2 yards behind the line of scrimmage, then moves laterally to the hole and stands up Sproles while Berry and Flowers come in to help finish the tackle. One (small) concern is that DJ seems to still be reading and reacting to the play a bit more than I thought he might in a 1-gap defense. There have been a couple runs that he seems reluctant to stick his nose in and shoot the gap. Again, it's preseason, and we all know that he excels at shooting the gap, so I'm sure it's nothing. 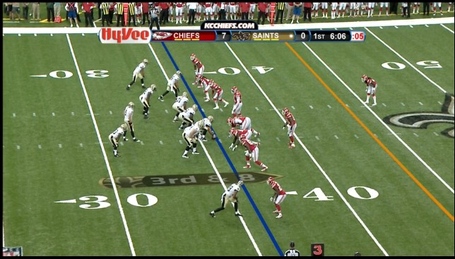 The final play for the first team defense sees the first blitz of the game for the Chiefs. Poe and Allen Bailey are in as the down linemen, and are both shifted to the strong side of the offense. Justin Houston is lined up wide, and Tamba Hali is standing over the weak side B gap...and ladies and gentlemen, that is Eric Berry lined up as an outside linebacker on the weak side! Again, Dunta and Demps are in the game, allowing Berry to be used in these sorts of looks. Right off the snap, Bailey gets a great bull rush off and Dontari Poe straight up beats the center in the strong side A gap (#TheDontariIncursion) to get into the backfield. On the other side of the play, Berry takes the outside edge while Tamba shoots the B gap. The left tackle has to block Berry, as the tight end to that side of the play is going to run out into the flat, and that leaves the sackmaster 1-on-1 with an overmatched guard. Poe and Tamba meet at the quarterback, and in what should have been an intentional grounding penalty, they disrupt the play to stall the drive.

Consider me pleased with the short looks that we got from the defense.  Many of my criticisms over the past 3-4 years came from the sub-set packages and the personnel utilized in those packages, and if there's anything that I can take from this game, it's that some of those concerns may have already been alleviated.  I would have liked to see a little more push from Jackson and Devito against the pass.  DJ and Houston didn't wow me, but we're aware of what those guys can do, so I'm not worried.  Most importantly, the guys played well and got off the field uninjured.  At this point in the season, there's not much else you can ask for out of your team.