Yes, it's just the preseason but it's easy to get excited about how well Alex Smith, Jamaal Charles and the rest of the Kansas City Chiefs offense did on their first and only drive of Friday's preseason game against the New Orleans Saints.

Share All sharing options for: Chiefs preseason, first drive recap: 'I don't know if that could've gone any better'

If one preseason drive is any indication, then the KC Chiefs are going to be the best team in the NFL this year.

Of course, one drive means very little as the 2012 Chiefs would tell you. Those Chiefs looked outstanding in the first half of their first preseason game, consistently driving down the field. And then they ended up being one of the worst teams in the history of the Chiefs franchise.

So that's some perspective but it's hard not to be excited about how things turned out for the Chiefs starting offense, who had one drive together on Friday night against the Saints. Alex Smith completed 7-of-8 passes for 68 yards. His one incompletion was thrown away. The Chiefs first possession was 14 plays for 80 yards and a touchdown. Jamaal Charles touched the ball eight times -- five carries, three receptions -- on that first drive. Anthony Fasano had two receptions.

These were your starters, in addition to Alex Smith: 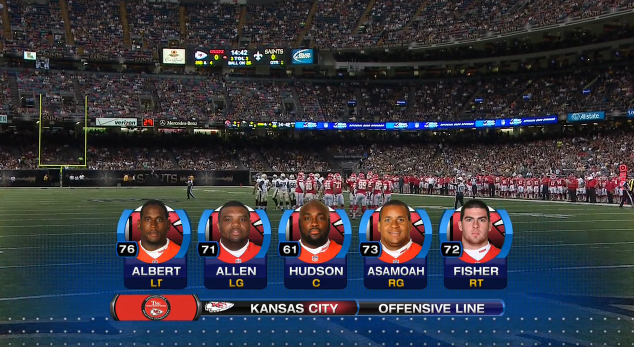 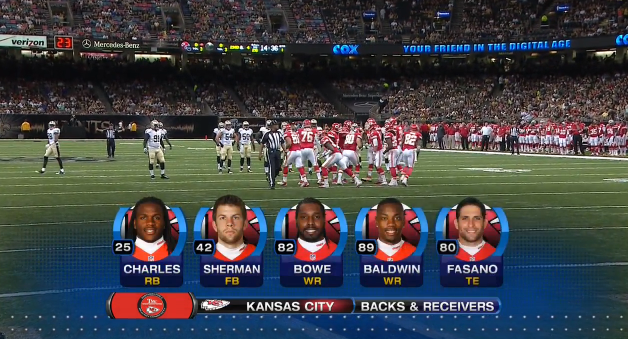 Let's recap the first drive from the first team offense.

Three-wide. Shotgun formation with Jamaal to the right of Alex.

Jamaal Charles screen to the right for a six-yard gain. He caught it five yards behind the line of scrimmage and ran for 11 total yards. Rodney Hudson was out in front with the block.

Two receivers, two tight ends. Jamaal is the lone back.

Alex fakes the stretch handoff to Jamaal on the left side -- the offensive line sold it well. Alex rolls back around to the right side of the field and finds Anthony Fasano, who released quickly near the right sideline. 11-yard gain. First down.

Trent Green said he thought the Chiefs would run a lot of two-tight end sets. 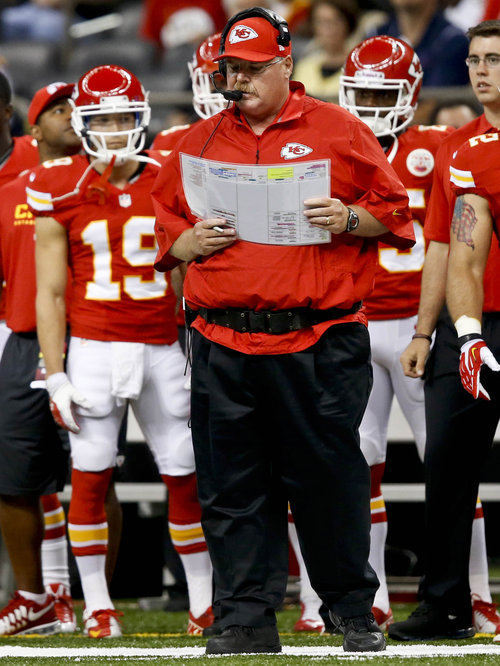 Shotgun. Jamaal lined up to the left of Alex.

It's an inside handoff off the right tackle for two yards.

Three-wide. Jamaal is the lone back.

Jamaal Charles in the left flat. He gets just enough for the first down before falling out of bounds. The Chiefs start picking up the pace on offense.

Three-wide. Shotgun. Jamaal lined up to the left of Alex.

Alex Smith pressured, circles out of the pocket and runs out of bounds. One-yard loss. It looked like he might've had Jamaal open as a short outlet.

The Chiefs are moving fast now.

Three-wide. Jamaal is the lone back.

Three-wide. Shotgun. Jamaal lined up to the right of Alex. Fullback Anthony Sherman in the slot. Tony Moeaki out wide.

Anthony Fasano quick slant inside, a nine-yard gain on 3rd-and-7. First down. Fasano was lined up in the slot.

Jamaal lined up in the bunch formation on the right. Anthony Sherman is the running back.

Sherman in the right flat for eight yards. Nice athleticism by Sherman to make the first man miss.  Looked like he was just the outlet. Alex Smith was looking downfield. 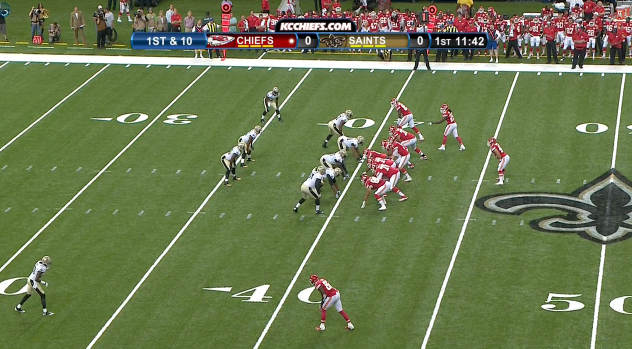 Anthony Sherman is the fullback and Charles is the running back. Bowe goes in motion.

Jamaal Charles rush to the inside right. Two-yard gain. First down.

Alex Smith to Dexter McCluster over the middle. 12-yard gain.  First down. McCluster lined up in the slot. Play-action fake to Charles and a quick pass from Alex.

Chiefs lined up in the pistol. Three-wide. Charles behind Smith. 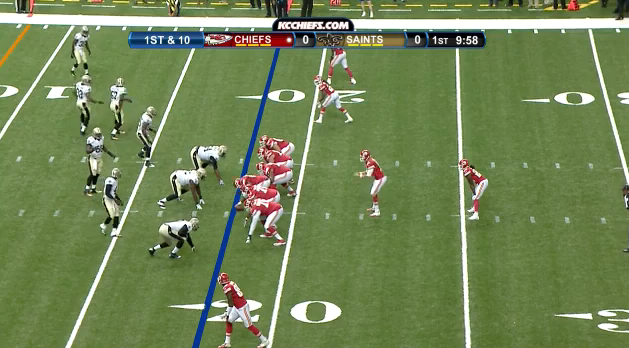 Shotgun. Jamaal lined up to the left of Alex. Two receivers and a tight end bunched to the left.

Alex Smith scrambles to the right and throws it away. His first and only incompletion. Rodney Hudson was pushed straight back by the Saints defensive tackle, who got his hands on Alex before he pulled away.

The Chiefs huddle after the incompletion.

Shotgun. Four-wide. Jamaal to the left of Alex.

Alex Smith to Jamaal Charles, who released up the middle. just past the line of scrimmage. Charles bursts through for a 12-yard gain to the one-yard line. Alex Smith double-clutched, stepped up in the pocket, and settled on Charles. First down.

Goal line formation with everyone on the line.

Jamaal rush to the right for a 2-yard touchdown. 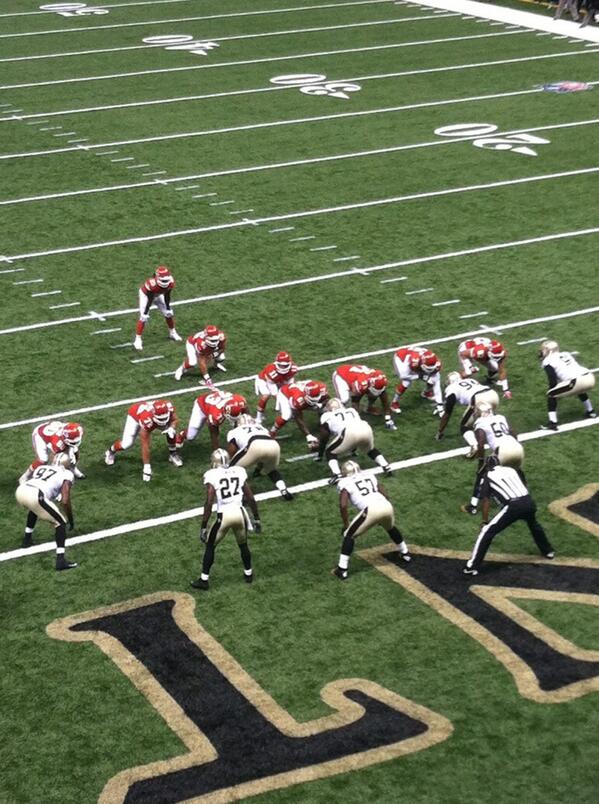 1. The Chiefs were in a hurry up offense for much of this drive and it was very successful. The TV broadcast was even late coming back from replay a couple of times, the sign of a truly fast pace. Alex called for a huddle after his incompletion and when the Chiefs entered the red zone.

2. Dwayne Bowe and Jon Baldwin saw no catches. Not even a target. In fact, no player lined up on the outside saw a target. Alex's passes were short outlet passes to the running back or tight end, usually to the right side or over the middle.

3. Of Alex Smith's seven completions, four were to a back, two to a tight end and one to the slot receiver.

4. There was just one rush to the left side, and it came out of the pistol.

5. The Chiefs didn't consistently have all the pre-snap movement that we saw in training camp. Maybe that was done for competitive reasons? Or because of the hurry up?

7. Players lined up everywhere. Tight ends lined up out wide and on the line. Same with fullbacks, which saw Sherman in the slot at one point. Jamaal Charles was in a bunch formation with receivers.

Chris Brown, @smartfootball, is one of the best minds writing about football on the internet today. We can only hope he writes something about Andy Reid and the Chiefs.

Third play of Chiefs pre-season game: shotgun inside handoff to Charles but looks like they have a quick game pass concept backside.

Biggest beneficiary of this could be Dexter McCluster: they are using him more in the slot and in bunch WR sets. Interesting