NFL Supplemental Draft 2013: Is O.J. Ross worth the effort?

We asked Travis Miller, SB Nation's Purdue expert at Hammer and Rails, about the pro potential of one of the prospects in the upcoming Supplemental Draft.

Share All sharing options for: NFL Supplemental Draft 2013: Is O.J. Ross worth the effort?

The 2013 NFL Supplemental Draft is coming up on Thursday, which means that you will learn a lot more about a handful of fringe prospects than anyone should ever really know. The doldrums of NFL news in July means football fans clamor for what they can get. And that means a lot of attention on guys who will most likely never impact a meaningful game of football ever again.

That said, it's hard to forget the value Josh Gordon, a Supplemental Draft pick himself, provided on the field for the Cleveland Browns just last year. On the flip side, most players eligible for the Supplemental Draft are there for a reason -- whether academic issues, behavioral issues and so on.

This year's crop of six players includes one man some might say is the best of the bunch: Purdue wide receiver O.J. Ross. Ross was the top returning receiver for the Boilermakers coming into 2012, and he finished with 56 catches for 454 yards and 2 touchdowns. He was also suspended by the team midseason for violating team rules. He's praised for his speed but his decision-making could use some attention.

Of 6 players in @NFL supp draft, Purdue WR O.J. Ross is best, but he's small and won't likely get drafted. Not a good group.

So should the Chiefs even consider the possibility? It's hard to tell with a fringe prospect like Ross, so we asked SB Nation's resident Purdue expert Travis Miller, the editor of Hammer and Rails, to find out more.

What sort of specific value would Ross bring to the field? Also any S/T abilities?

"Ross was a kick returner very early in his career, gaining 277 yards on 12 returns, but he was never outstanding there. He was not the primary returner then and was later passed by Raheem Mostert and Akeem Hunt for those duties, who each had a return for a touchdown in addition to other big returns. I suppose he could make his mark there, but he struggled to do that at Purdue."

Six players in the 2013 Supplemental Draft 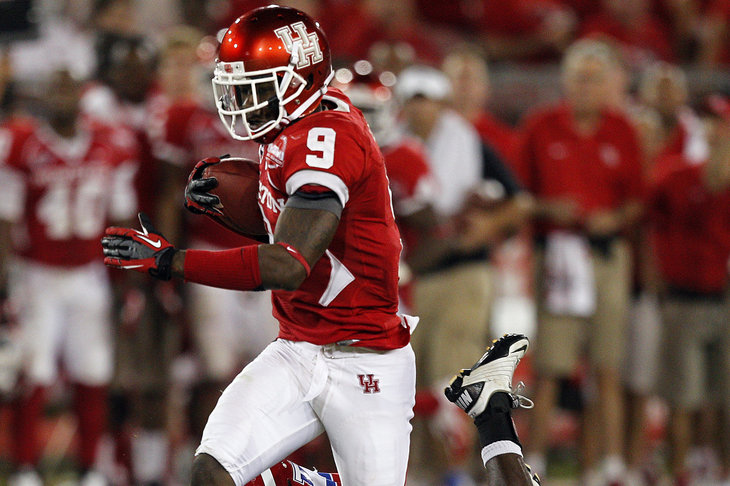 "Honestly, Ross' tenure was a bit of a disappointment during his Purdue career. We rarely get 4-star recruits and he came in as one that had a lot of hype, but HS teammate Ricardo Allen, who came with him, always gave better results and has become the better pro prospect. Ross had multiple off field issues and was never overwhelming great when he did play. At best he was a steady college receiver, but part of that could have stemmed from an offense that never seemingly had any plan in place."

Is there any reason to believe Ross could settle down in terms of maturity?

"At this point I would say no. He missed most of a training camp because he had a child born down in Florida and dealt with that. He was suspended for academics for the Little Caesar's Bowl after the 2011 season and his most recent suspension, which ended his Purdue tenure, was simply the latest incident for him. If he hasn't gotten it by now I don't think he ever will."

If you had to bottom line it in terms of whether or not Ross was worth the fuss for an NFL team...

"I don't think so, not when his Purdue tenure was underwhelming. He is not a good blocker as a downfield receiver, he wasn't a technical expert in terms of route-running, and while he had good speed for the college game, it was far from elite level speed. I don't think there is anything that really stands out about him that makes me think he would be a good pro."

Thanks to Travis at Hammer and Rails for answering our questions!