Branden Albert's long-term contract deadline is one week away

Will the KC Chiefs left tackle remain a Chief beyond 2013? That's the big question. Here's what we know right now.

Share All sharing options for: Branden Albert's long-term contract deadline is one week away

The deadline for franchise tag players -- lookin' at you, KC Chiefs left tackle Branden Albert -- is coming up one week from today. If players who have been issued the franchise tag do not come to a long-term contract agreement with their team by next Monday, July 15, they will be forced to play out the season on the one-year franchise tender. Albert has signed his tender which means, regardless of what happens next Monday, he is under contract as a Chief for the 2013 season.

This deadline is all about securing his services beyond that mark. Albert is set to make roughly $9.8 million in 2013 under his franchise tender. Tagging him again in 2014 would put him number closer to $12 million, which means he's looking at $20-ish million over the next two seasons if the Chiefs choose to tag him two years in a row. That, to me, is where the contract numbers should start. Then again, I'm not a lawyer or an agent workin' the contract. 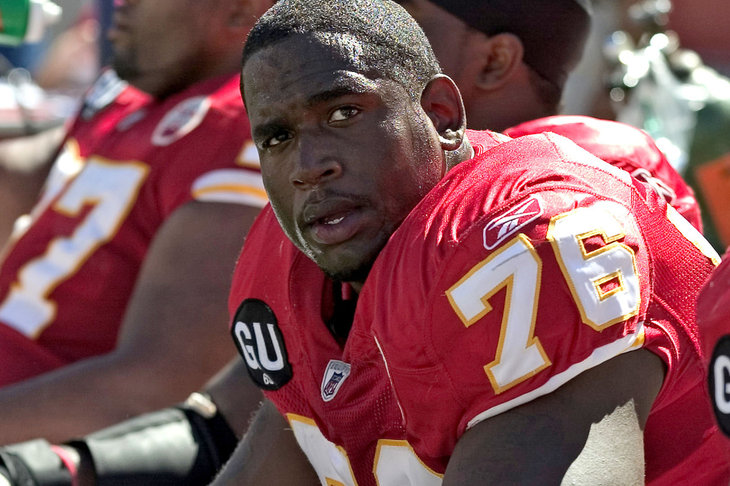 A cheat sheet for John Dorsey and Branden Albert's Agent.

The last report on this situation indicated the two sides would talk sometime this week. They have taken this long to get a deal done so I would guess that nothing would be done -- if at all -- until much closer to next Monday's deadline. The only hope here is that the July 15 deadline will push the two sides to close whatever financial gap they have.

And speaking of that financial gap ... we really have no idea what that is. There have been no solid reports on the money these two sides are talking about or for how many years a deal might be. Perhaps those numbers are leaked this week. For all we know they could be $500,000 apart. Or $5 million apart.

All signs point to Albert staying with the Chiefs throughout the 2013 season no matter what happens this week.

Since the season ended, the Chiefs have drafted Eric Fisher No. 1 overall. He's been practicing on the right side of the line with Albert holding down the left.

"I have no problem with him being the left tackle," Reid said of Albert in May. "He's done it and done it well for a number of years. We brought Eric on board and Eric's one of those guys who's big and athletic he can play anywhere across the board. That's a good problem to have."

All signs point to Albert staying with the Chiefs throughout the 2013 season no matter what happens this week.

That's what we know right now. Note that there is a lot we don't know, so I can't predict how this thing will turn out. I have no idea.

By the way, remember the last time there was a deadline associated with the franchise tag....

What Albert said on his first day back