History says the Kansas City Chiefs are going to be passing a lot more this season. And one of the beneficiaries of that should be Chiefs running back Jamaal Charles. Hear what Andy Reid, Alex Smith and Charles have to say about the backs catching the ball this year.

Much has been made of Andy Reid coming to the Kansas City Chiefs and bringing a new offense with him. One of the players who will be most affected by that is KC Chiefs running back Jamaal Charles, who has been participating in training camp the past five days.

What Charles may lose in carries he could gain in receptions. Remember, it's about touches this year with Jamaal -- not carries. Jamaal will be seeing more passes out of the backfield, something that has been evident by watching the first five days of Chiefs practice.

"He's capable of doing the same things that [Brian] Westbrook did and that [LeSean] McCoy did as far as the pass game," Andy Reid told reporters after practice. "He's a legitimate threat with his speed, his route running ability and his hands. He catches the ball very easy."

"He's capable of doing the same things that Westbrook did and that McCoy did..." -Andy Reid

"The thing that's jumped out at me the most is his ability in the pass game as well," Alex Smith said. "Really versatile player. He's a matchup mismatch with the ball in his hands all over the field. I don't think there's any situational football you couldn't have him in. I think he's that versatile."

Training camp practices often have the running backs going out on routes. Charles has lined up all over the place, from running back to even receiver. It's the lining up as a receiver that is intriguing because this season is expected to see Charles see a lot more receptions.

In fact, Charles said he would "definitely" pass his career high of 45 receptions in a season. "I just say watch out and we'll see," Charles said. 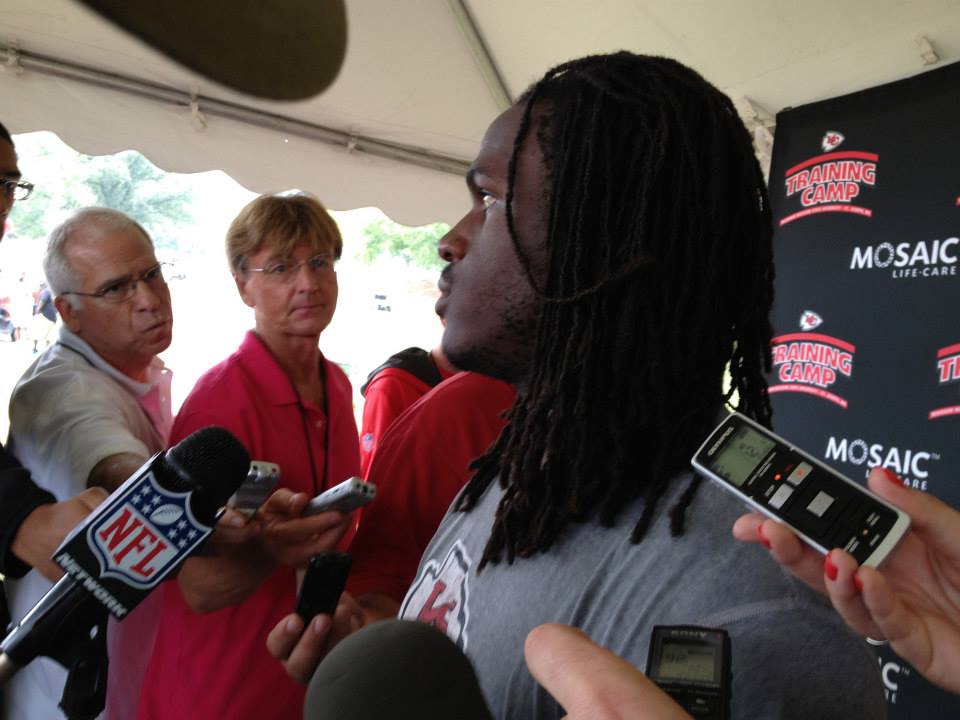 The added responsibility means that Charles has a lot more to remember. He needs to know what his role is as a running back, where to line up at receiver, what Alex Smith's pre-snap communication means and things like that. Oh, and the playbook is a lot bigger than he's used to.

"It's the most plays I've had to remember in my whole life playing football," Charles told us after practice. "It's a lot of studying and focusing on what the quarterback is saying at the right time."

Is now the time where Charles is learning this stuff or just re-fining it?

"I feel comfortable with it," Charles said. "I'm glad I'm in an offense like this so I can show everyone what my versatility is. I can play running back and go out and play receiver. I'm making plays and I'm going to continue making plays."

If that didn't pump you up then this will...

"We're going to win more than two games I can tell you that," Charles said.

Is it September yet?