The Kansas City Chiefs must push hard in training camp to be ready, but not at the expense of injury.

It's happening all over the map. NFL teams are getting into training camp and going hard, too hard. Some players haven't gotten their bodies right quite yet and are paying the price.

Jeremy Maclin, Dan Koppen, Dennis Pitta. All solid players and important pieces to their respective puzzles. Now? Injured and out for the season before anything important got underway.

For the Kansas City Chiefs, this should be a lesson. Training camp is important and players should be doing all they can to get ready and in some cases make the team. All that said, it's important to take all the precaution not to be on a cart, headed off into oblivion.

The starting 22 looks good on paper for Kansas City. The team has new pieces all over the field with the likes of Alex Smith, Sean Smith, Dunta Robinson, Mike DeVito and Donnie Avery among others. Throw a new head coach with a proven track record into the mix, and things are looking up even to the biggest pessimist.

"...that can all go down the drain with an injury at the wrong spot."

Unfortunately, that can all go down the drain with one or two injuries at the wrong spot. Think how the Chiefs would look with a crippling injury to Jamaal Charles or Dwayne Bowe. How about Derrick Johnson or Brandon Flowers? Sure everything looks good now, but injuries will crush this group. The depth simply isn't there.

Some injuries can't be avoided, happening on a cut or within a tangle of bodies at the line of scrimmage. Others can be taken out of the mix by a defensive player pulling up on a big hit or an offensive player realizing his limitations less than a week into camp.

I'm all for good, hard-nosed football, but regular season games aren't won and lost in the first week of camp. Sure, players and coaches will say they are, but it's all talk. The real contests are won in the preparation and then the execution on a particular Sunday. Camp is essential, but almost every team comes out of camp in shape and with a good knowledge of its playbook. 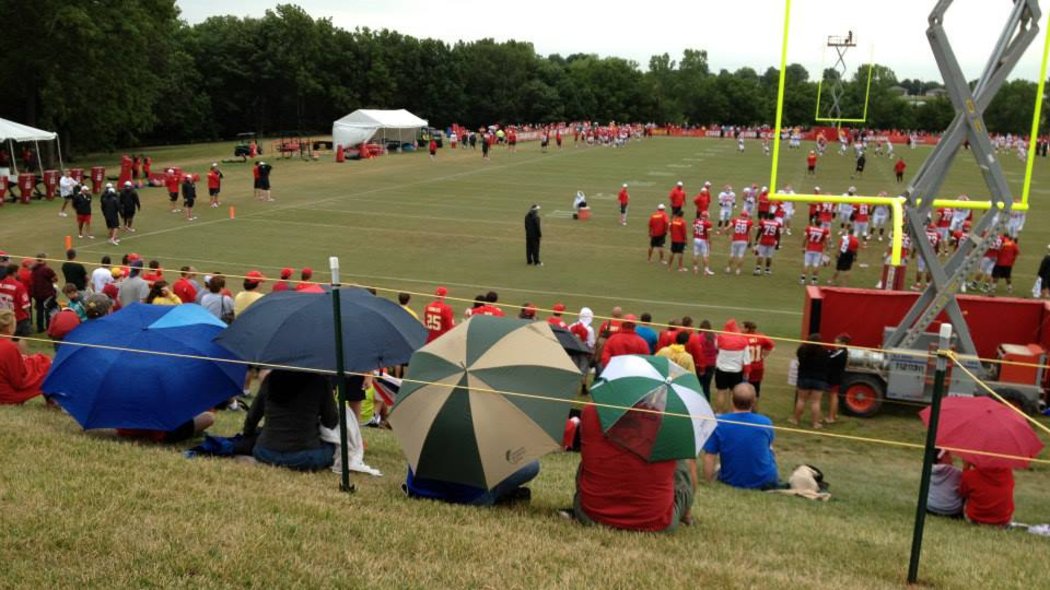 The Kansas City Chiefs practiced in the rain on Monday for the team's fourth practice of training camp. The highlights include the loss of Eric Berry (but don't worry!), full-on tackling to the ground for the first time in camp and an update on the Chiefs special teams.

"The Chiefs on Monday morning held their first training camp session that included tackling to the ground," Arrowhead Pride's Joel Thorman reported. "The full-on tackling was the buzz of camp on Monday because it's not something we've seen from the Chiefs in recent years. I'll admit: I cringed every time Jamaal Charles hit the hole or Tony Moeaki went across the middle. The problem you face is that players can be hurt on a non-contact drill that every team does just like they can be hurt getting drilled across the middle."

The most important thing is health. You can always make adjustments in the NFL on a week-to-week basis, but without your major playmakers you are sunk.

The Philadelphia Eagles will spend all summer saying that Maclin's injury is simply a bump in the road, but that's nonsense. Maclin's injury is a crushing blow. It's a trickle down effect more than anything because without him, teams can key on DeSean Jackson completely. Nobody is laying awake, terrified of getting beat by Riley Cooper.

It's barely more than month until the Chiefs set their collective on Jacksonville. For a chance at ultimate success, all the major players must be there in uniform, not as cheerleaders.

"Today is not the most important day," Chiefs QB Alex Smith said at training camp. "Jacksonville is the goal, to get everybody healthy by then."