The Kansas City Chiefs took the field for day two of training camp. Notable story lines include a possible injury to Jeff Allen, Dwayne Bowe's continued absence and an interesting defensive formation from the Chiefs. Read on for updates.

I was legitimately cold this morning at practice. Cold! It's July!

RT @NWSKansasCity: Looks like Kansas City TIED the record low this morning of 55 degrees. The previous record was set in 1994. #mowx #kswx

The low of 51 in St. Joseph fell 4 degrees short of the previous record of 47 set back in 1971. Still pretty chilly however!

Sam Mellinger was making fun of me for whining about the cold. Related: I'm taking insult requests for Sam in the comments.

I did not see what happened with him. A player was being carted off the field and up to the Chiefs facilities at the top of the hill by the fields. I saw a white shirt and defensive players wear white shirts so I thought it was a defensive player. But then we noticed that Jeff Allen was no longer working with the offensive line unit and by process of elimination we figured out that the player being carted off was actually him.

No word on what happened. I didn't hear anything from the players afterward. 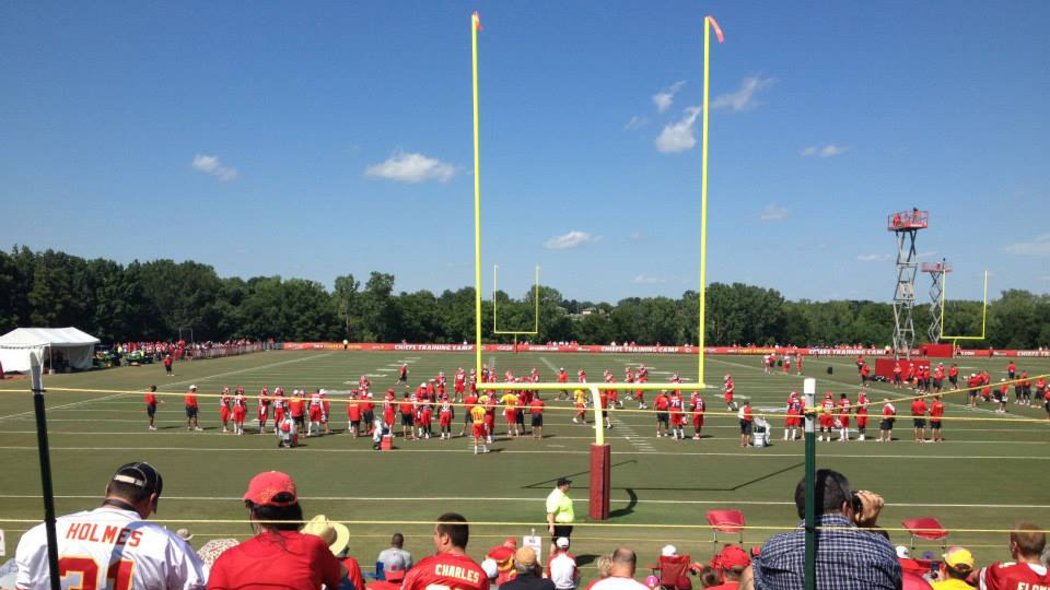 Geoff Schwartz replaced him in the lineup. Those two are in a position battle so an injury to Allen, even a minor one, could be significant in the context of the position battle.

We'll update you on Allen once we know more. Arrowhead Pride readers at camp today had more observations on Allen, which you can read in the comments here.

Alex Smith at quarterback. Sean Smith lined up on the left covering Jon Baldwin. Alex drops back and goes deep to Baldwin, who is sprinting down the field. The ball is on the inside instead of the outside, giving Smith a shot at what should have been an interception. But Smith appeared to take the ball in and then fell on it, with the ball popping out.

Smith stayed down. I couldn't tell what he hurt but the trainers came out and checked on him. He was down for maybe a minute before walking to the sidelines. A couple minutes after that he ran back across the field to the rest of the defensive backs and resumed drills. So he's fine.

In fact, just a couple of plays later, there was a good example of why the Chiefs brought him in. Covering the right side of the field, Smith batted down a pass that probably would've gone over the head of the 5'9 Brandon Flowers.

Dwayne Bowe was out again on Saturday. He was off to the side working with the other players who are not practicing. With Bowe out, Devon Wylie saw some time on the outside opposite Jon Baldwin. Interesting that it was Wylie on this day and Donnie Avery, who lined up with the second team. It's possible that with Baldwin and Avery competing, they just wanted Avery to learn one position, which would keep him on the second team.

Wylie had a little bit of a rough go at it on Saturday but playing on the outside and lining up against Sean Smith doesn't seem like his game. He's better in the middle of the field.

Here's everything we know about D-Bowe absence right here.

Also, this is what it looks like when D-Bowe runs away from you: 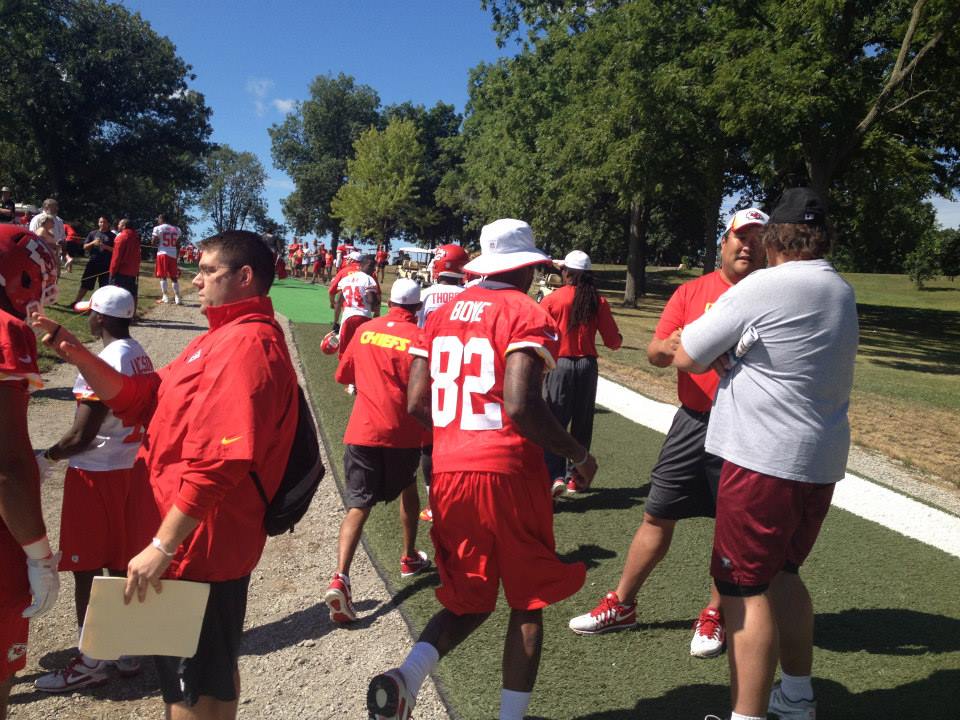 Dexter is the fan favorite

Everyone loves Dexter McCluster. There are a lot of intermediate passes in the West Coast Offense, some drags and things like that, which seems to fit McCluster well. I swear every time he catches the ball, the crowd cheers. He's maybe the most recognizable Chief with his dreads -- and everyone loves the little guy -- so I know why the fans are cheering.

They're all getting a lot of reps. This isn't going to be a position battle that's easy to figure out.

I'm excited about the two tight end formations because Alex Smith has had success in that before. The Chiefs have the personnel to run that all the time and not be at a disadvantage.

Travis Kelce is really athletic. You'll see him in traffic all the time. He did have one easy drop near the flat on the right side of the field.

Demetrius Harris has stood out at times even though he's not on the first team. For someone who hasn't played football full time in years, he is capable of catching the ball in traffic. That's not easy to do.

With Tony Moeaki and Anthony Fasano in that group, good luck figuring out who comes out on top. 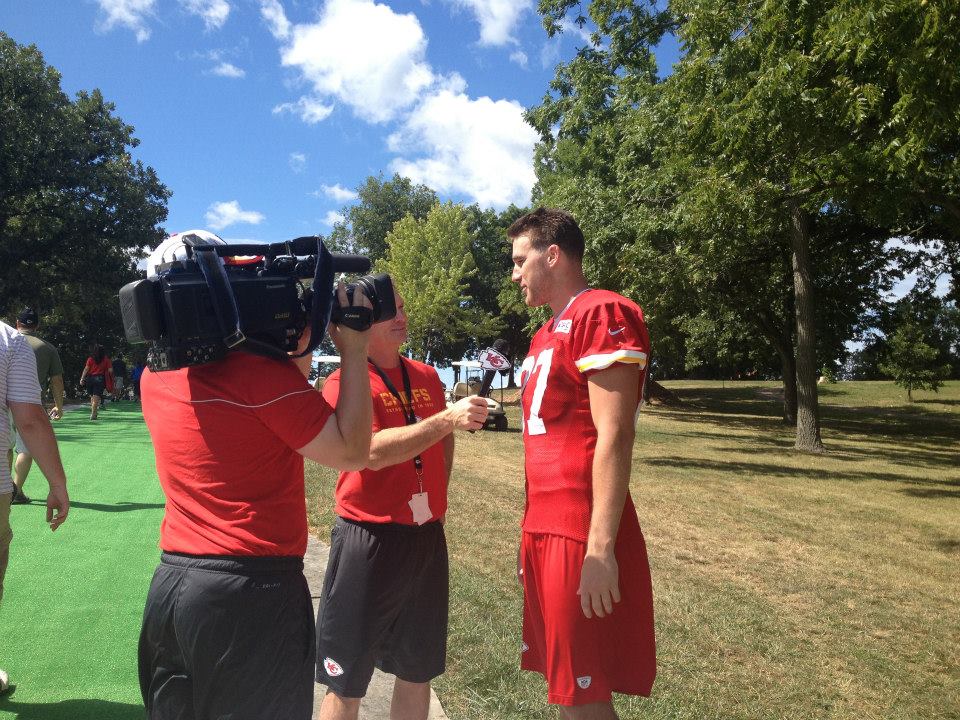 That was the knock on Davis during the offseason and maybe it's because I've been looking for it but I did notice a couple more drops on Saturday.

The first one came in a drill with the quarterbacks passing to the running backs. The second one came in team work, with Chase Daniel's pass to the flat just a little low but still catchable. Davis dropped it.

We'll continue to monitor this but once you get tagged with the label of someone who drops passes or fumbles, it's hard to get rid of it.

Among those getting reps at returner were Quintin Demps, Dexter McCluster, Devon Wylie and Rico Richardson.

Knile Davis was out there yesterday but he muffed a punt, which was perhaps the reason Andy Reid said after yesterday's practice that they needed to get better at catching those returns.

The leaders through two days? My guess would be DMC and Wylie.

Neat defensive formation by the Chiefs that had seven defensive backs on the field. Maybe it was just the dime and Eric Berry was a linebacker but it was an odd sight. 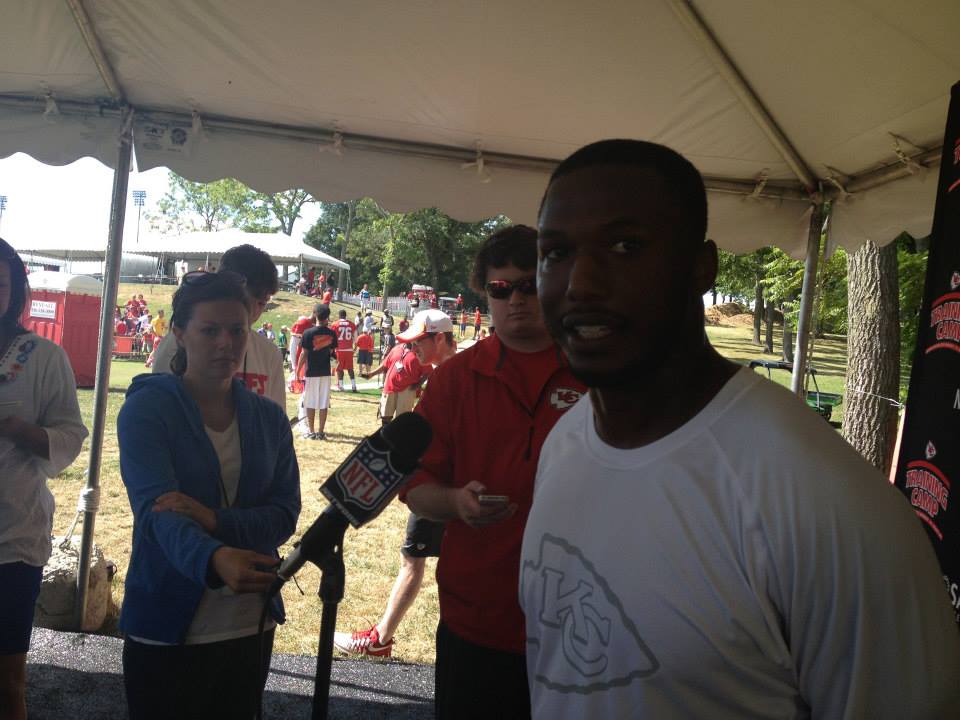 We're only two days in, and they're sharing third-string duties, but an update on the third quarterback battle.

The first and second team -- Alex and Chase -- were consistent in their reps. When it came to third team, Bray was consistently taking snaps ahead of Stanzi on Saturday. Maybe they'll rotate this camp. We'll see. But the feeling among the media is that Bray will win out. 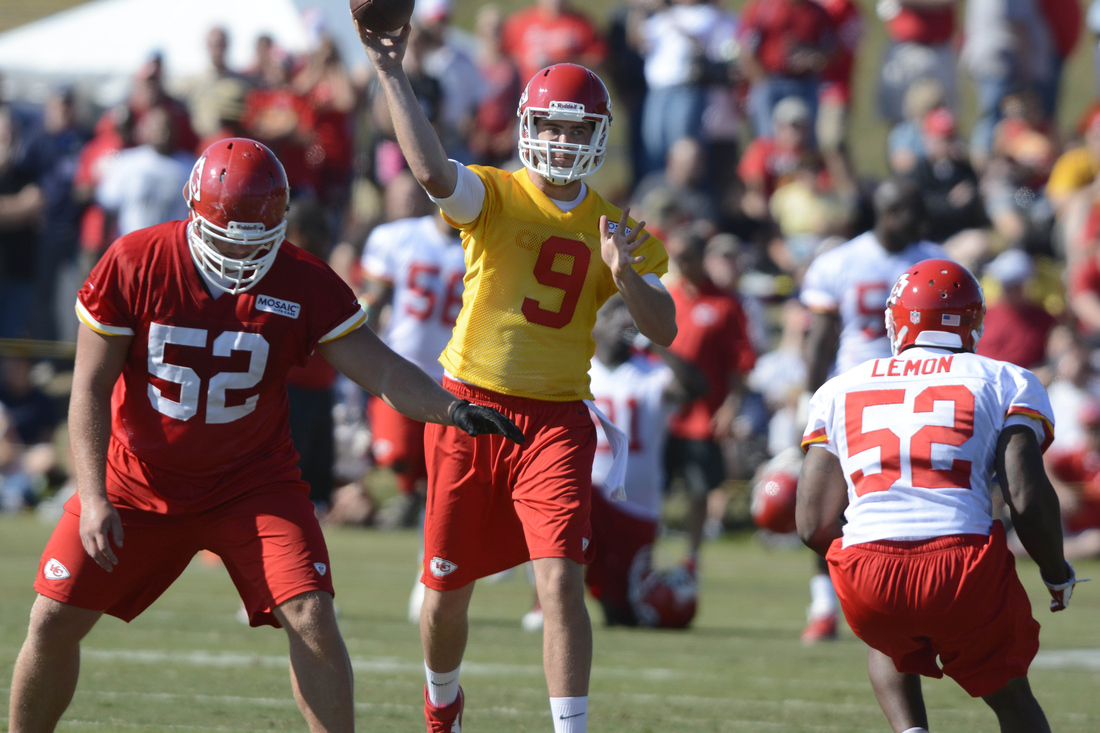 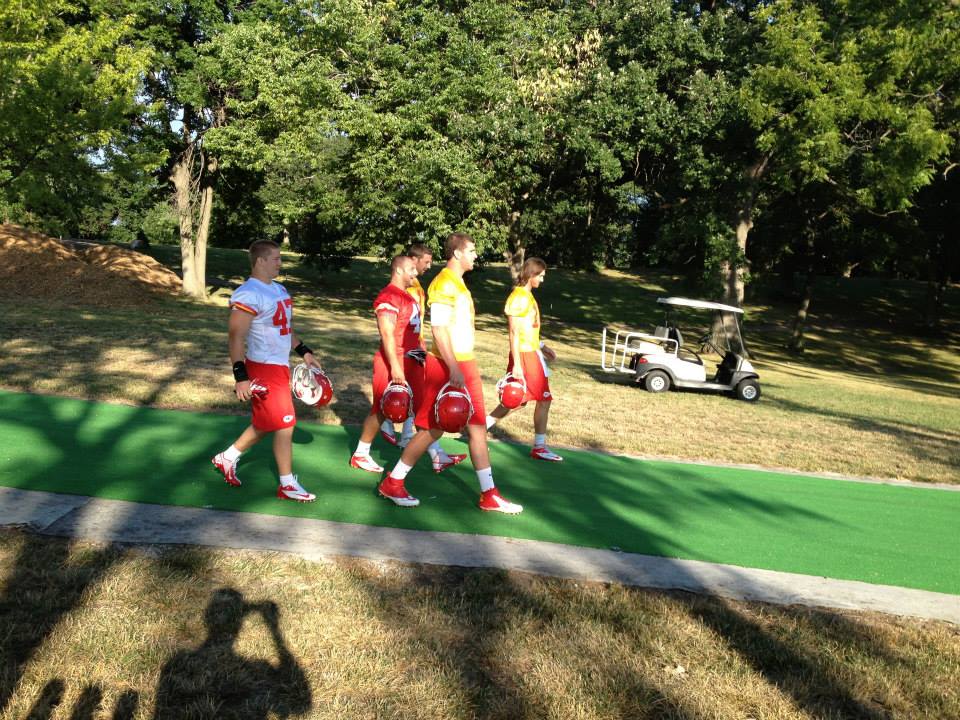 Or someone running Jerrell Powe's account. This tweet came during practice today. As I was looking at Powe walk on the field. 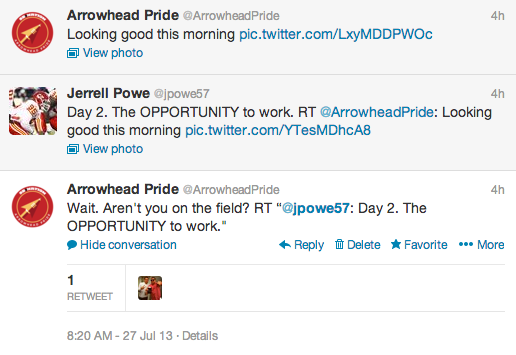 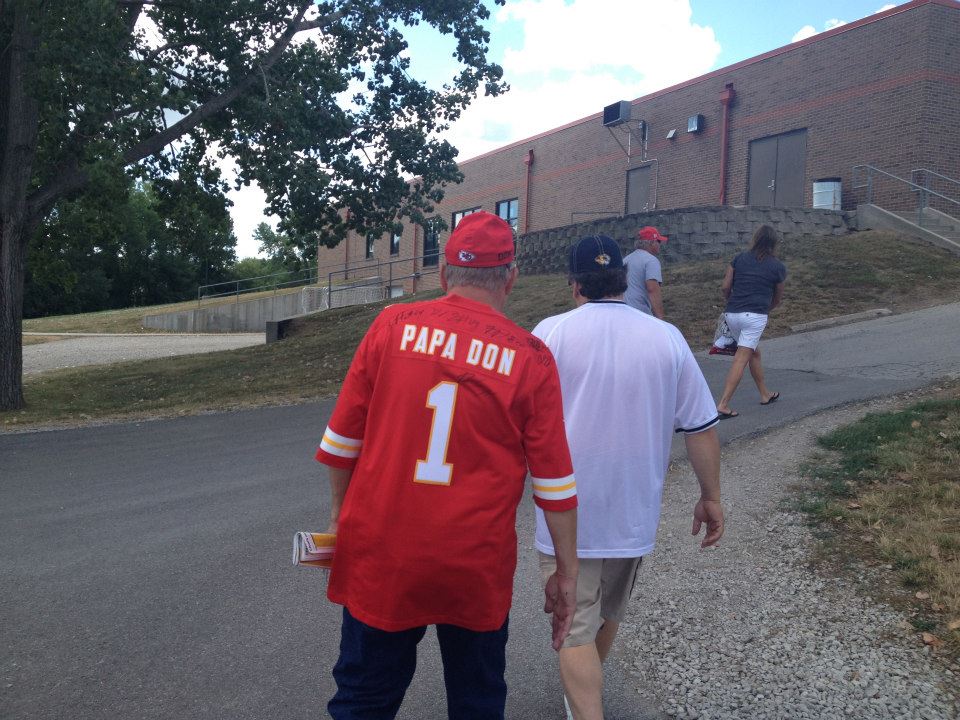 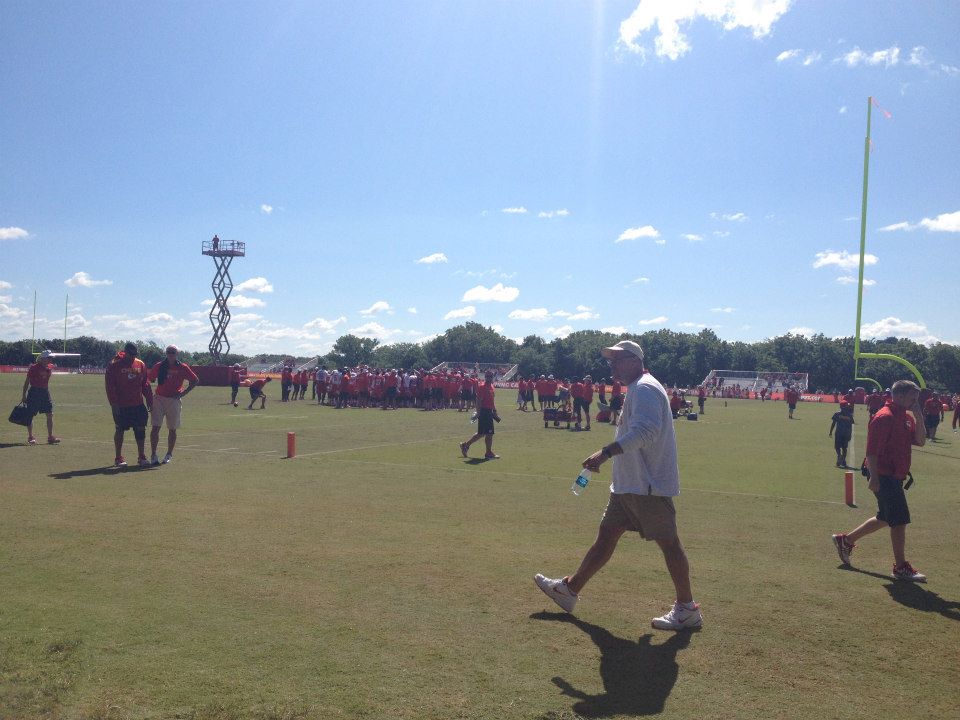