Here she is, your very first KC Chiefs training camp practice report of the 2013 season. Read on for updates from day one of Chiefs camp in St. Joe. If you're looking for news on D-Bowe sitting out, we already covered that here.

The very first Andy Reid training camp in Kansas City officially started with Welcome to the Jungle blaring through speakers on the field. To get you in the mood, you better play this as you read this practice report.

Maybe I'm just used to a Romeo Crennel-run training camp but Reid's camp was active. There was very little down time between plays. Reid explained that they did a "10-10-10", with each unit getting 10 plays. Reid said it was a good way to make sure everyone understands their assignments.

There was a lot more team work, like 11-on-11, right at the beginning of practice which is a change from previous years when it would be the last session of the day (and the best). This practice was more fun for the casual fan to watch because of that. You go to camp to see the 11-on-11 work.

More: All of our camp reports

Alex Smith on the move

You know how some people said Alex Smith is a mobile quarterback, even if he's not racking up rushing yards? I kinda understand that a little more after seeing him on Friday. Even though the defense wasn't really coming at him he was still mobile in the pocket, rolling out and things like that.

Smith did connect on a nice deep pass to Dexter McCluster, who got several yards on his receiver. That was actually the first play of team action at camp. Smith smiled when he called it a "crowd pleaser" after camp, but he also said he wasn't quite ready for it. Sometimes long touchdowns just happen, you know? 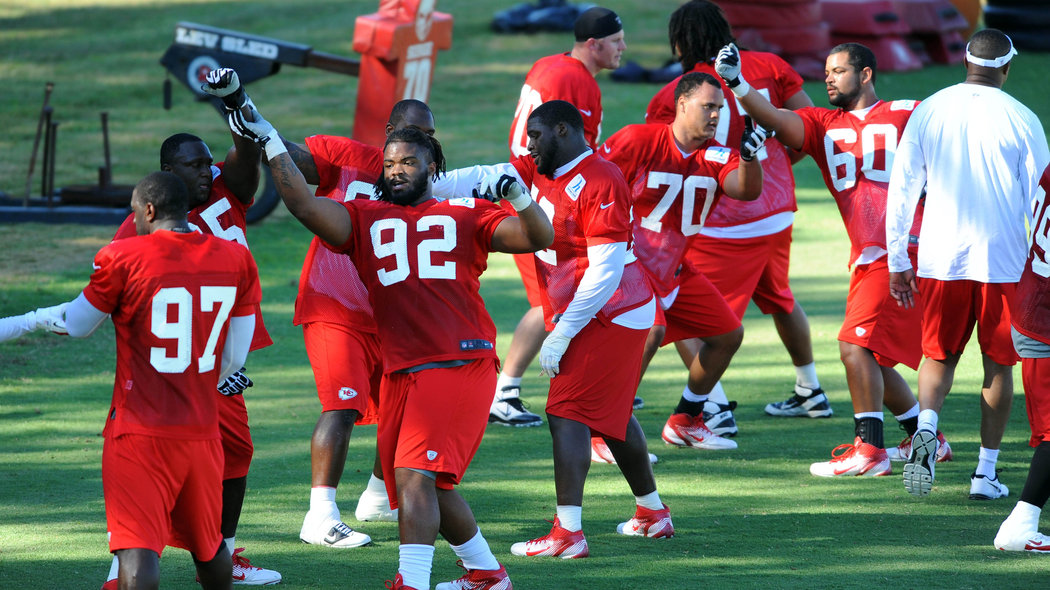 Smith connected with all of the tight ends at some point during practice. That'll be a connection to watch.

Chase Daniel did well as the No. 2. I can see the potential and why he's in this offense, from the very little I know about it. He didn't look out of place all the time. Daniel had a nice pass across the middle to Demetrius Harris that looked smooth, but it was really two guys with very little NFL experience.

But there's also a noticeable difference between him and Alex Smith.

There isn't a starting quarterback position battle in Kansas City this year.

He was more active in the pocket than we've seen from other Chiefs quarterbacks in the past few years. Of course, there's no defense and the lines weren't going 100 percent. It got me in the mood for some preseason football (how miserable am I?). 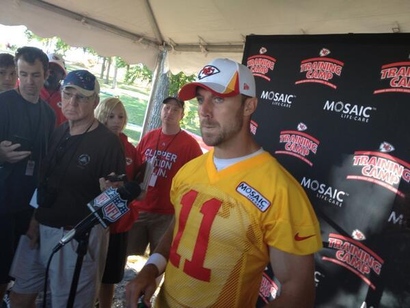 No pads, no offensive line analysis

Not that I know what I'm talking about anyway.

Andy Reid confirmed that pads would come on Sunday. Per NFLPA rules, the pads can't come on until day four. The move-in day counts as day one, so Sunday is the first day of pads.

This is important because I want to see the offensive line do more than they're doing now. You can glean a little bit from the skill position players when they're just in shorts and a helmet but with the lines you need more.

The o-line looked like this: Branden Albert, Jeff Allen, Rodney Hudson, Jon Asamoah and Eric Fisher. Allen and Geoff Schwartz is the battle to watch on the line. Donald Stephenson was a left tackle on the second team.

The defensive line is what you expect -- Tyson Jackson, Dontari Poe, Mike DeVito.

Akeem Jordan at inside linebacker

In another position battle, Akeem Jordan ran with the ones at inside linebacker as he did in OTAs.

Kick returners could use some help

Like I said earlier, everything seemed so smooth. I expected a lot more mistakes and little miscues than what I saw. There was one area that was enough of a problem that Reid referenced it after practice: kick returns.

No, not the blocking. (Not that I even know enough to tell you when they're screwing that up.)

Knile Davis was the one I caught. He botched the catch on a kick return. It looks like he took a step too early and the ball sailed over his head through his hands.

If you haven't watched kick returners closely before, it's actually kinda neat. It looks like they're taught to be moving forward when they catch the ball. So they let it come down to them in the air and they take a step forward as it hits their chest, which puts them in motion as the ball comes in. Every second counts. It's one of those things that seems like it should be easy but get up close and watch them do it. It doesn't look all that easy when you see the action up close. Devon Wylie did a nice job hauling it in.

We're still continuing to get to know Andy Reid but there doesn't appear to be any hidden meanings with this one: "We have to do a better job of catching balls on the kickoff return."

Tyler Bray and Ricky Stanzi split reps. I got a feeling this one is going to last for a little while.

Neither really stood out during practice. (Don't freak out about that. We're judging them on like two dozen plays.)

Two plays that pop out at me were actually incompletions.

Stanzi missed an open receiver, Frankie Hammond Jr., going towards the corner near the goal line. He probably should've hit him.

Tyler Bray clearly has a big arm, that's something Alex Smith mentioned after practice. (Speaking of big arms, what's going on here Alex Smith?) However, he was short on one bomb down the right sideline. The receiver had to slow down, stepping out of bounds. That's memorable because I didn't expect him to be coming up short very often.

I'll keep a closer eye on the third quarterbacks this weekend. My camp-reporting could use some brushing up.

Chase Daniel is throwing to Jamar Newsome, who is lined up on the left. Newsome heads out about five yards and turns around with the ball already in the air.

But Flowers is too good for that. Too damn good. He was able to jump in there, bat it away, and the pass falling incomplete.

Yeah, just a normal play, but I think we all need a reminder now and again that Flowers is really, really good.

Everyone passed the conditioning test

Would Reid tell us if someone failed it? There were four players who didn't practice and they were all accounted for with injuries. He said everyone passed.

Trainer stretching Duntas legs off to the side

Reid said after practice that it was just a spasm. The Chiefs coach saw him catching some passes after practice so he didn't think it was a big deal.

Just one day earlier, Dunta Robinson told us that being considered old at age 31 was a "tough pill to swallow." 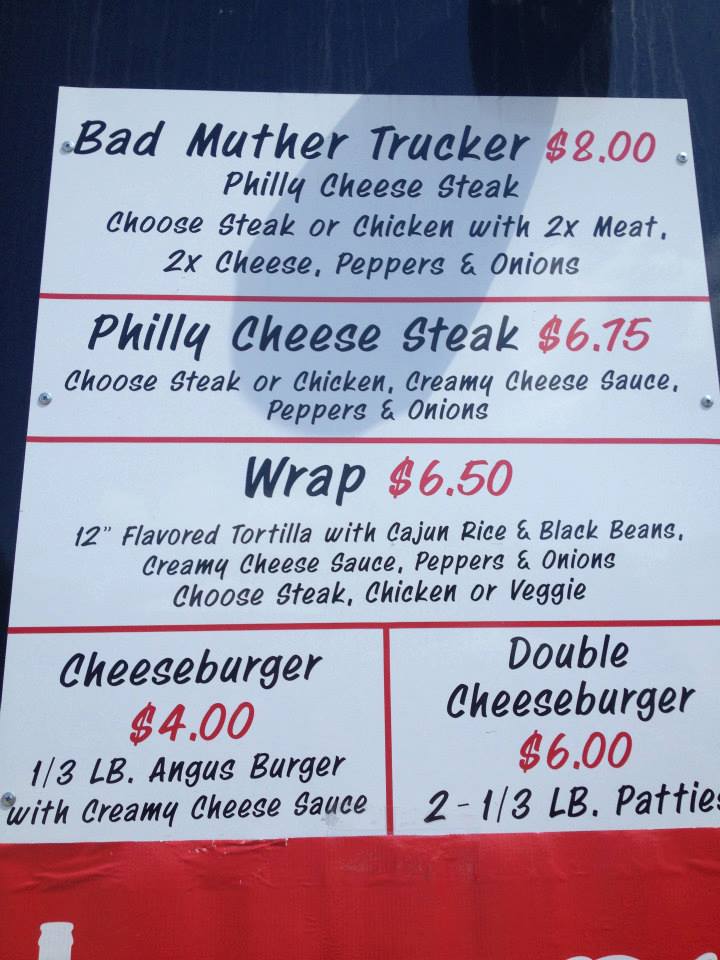 This is an excellent looking field 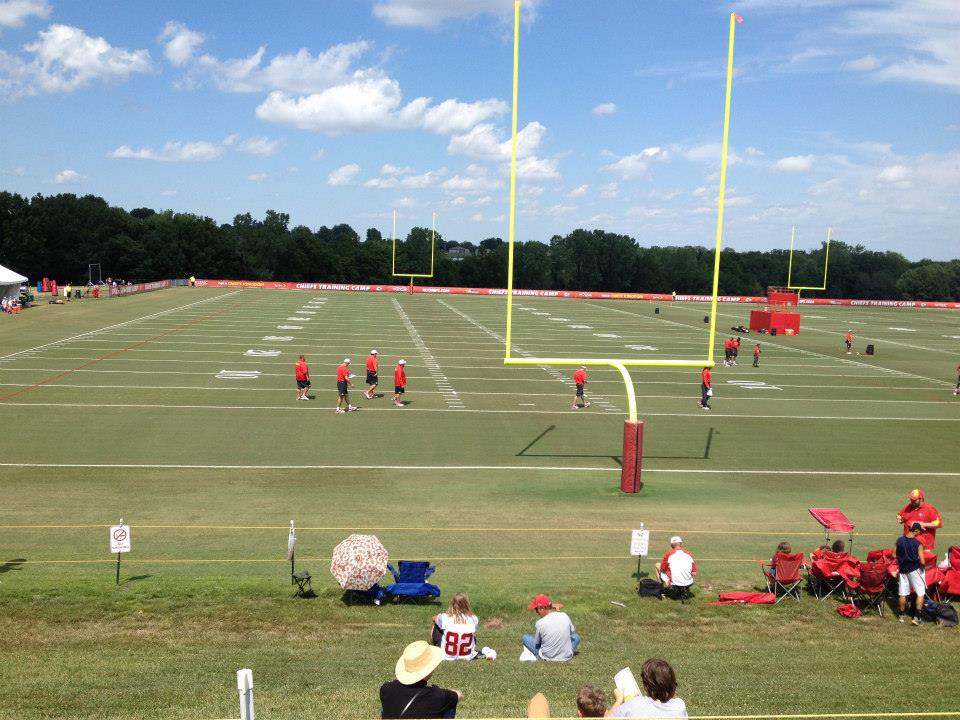 MWSU and everyone involved really did a nice job with this one again. If you read the blog often, you know I am obsessed with getting my lawn to look like this. Nope, not even close.

Fans get a good review

The facilities look good in St. Joe. And so do the fans.

It felt like game day with all the jerseys I saw. Everyone had Chiefs gear on. Seriously, 90 percent of people had a Chiefs shirt or jersey on. There was even a woman with what appeared to be a smaller version of the KC Wolf costume, which was actually pretty damn weird. There's only one KC Wolf.

And speaking of KC Wolf he was there as well.

There was music during practice which really notched up the excitement, along with the number of fans in attendance. It was a fun atmosphere.

Gotta appreciate the fans coming out to practice! #LUVIT #ChiefsKingdom

Fans showing up to practice made running around out there that much easier. Thanks #ChiefsNations !!

I was hustling my way into Chiefs camp this afternoon, a few minutes before 3:00 p.m. which would leave me plenty of time before the 3:30 p.m. practice. I made the trek from the Chiefs communications set-up in one of the campus buildings to the front of Spratt Stadium, which houses the practices fields.

And who do I see standing right there at the entrance? None other than Mayor Sly James. I know him as @MayorSlyJames as my only experience with him is through Twitter. So I introduce myself, talk Chiefs for a minute -- he's pumped for the home opener -- and he tells us he enjoys the blog.

(This whole exchange also made me realize that I need a title that can start with "The". Like the Mayor. I'm hoping The Blogfather will catch on. I wonder what my pal Sly thinks about this.)

I don't have a final count of how many fans showed up but early projections had it at 2,000. The bleachers that line one side of the field were mostly full. There were also fans hanging around the common areas where the food and drink is. A few more in the kids zone. And a whole lot more on the hill lining another end of the field.

Andy Reid on whether he thought the Fisher deal would get done: "I've been in this long enough to know that until the fish is in the boat, you don't count it caught." 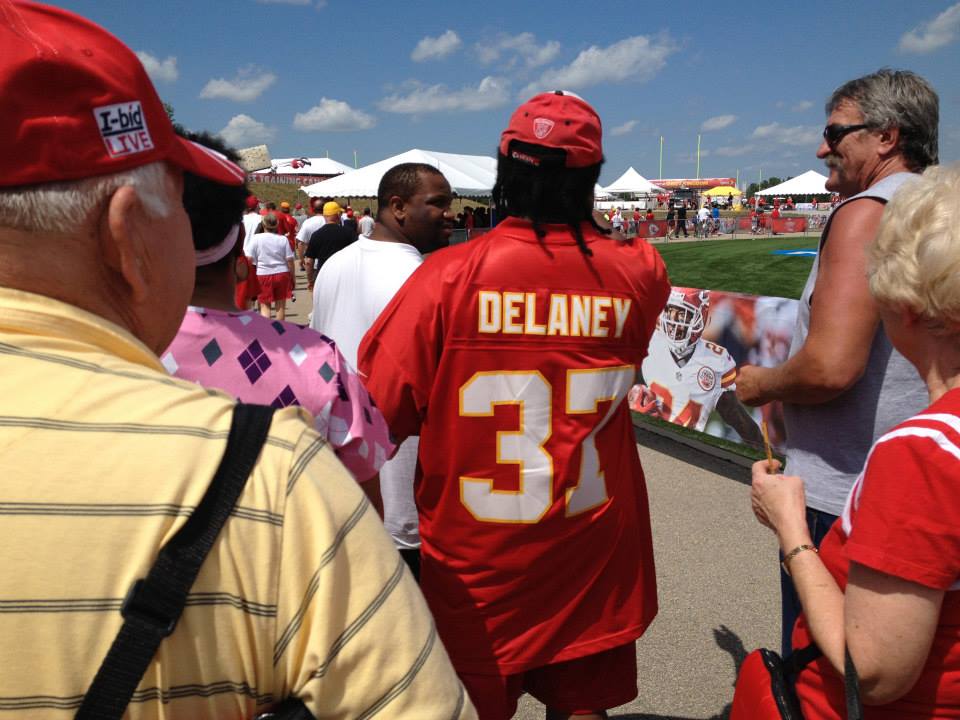 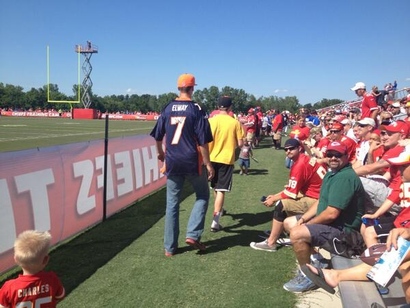 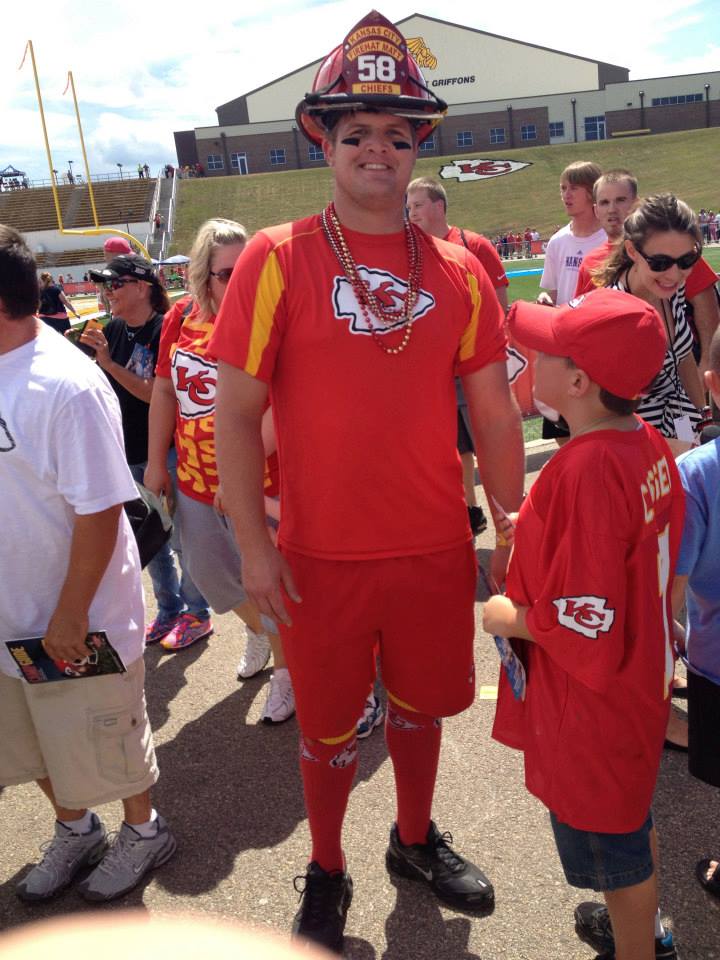 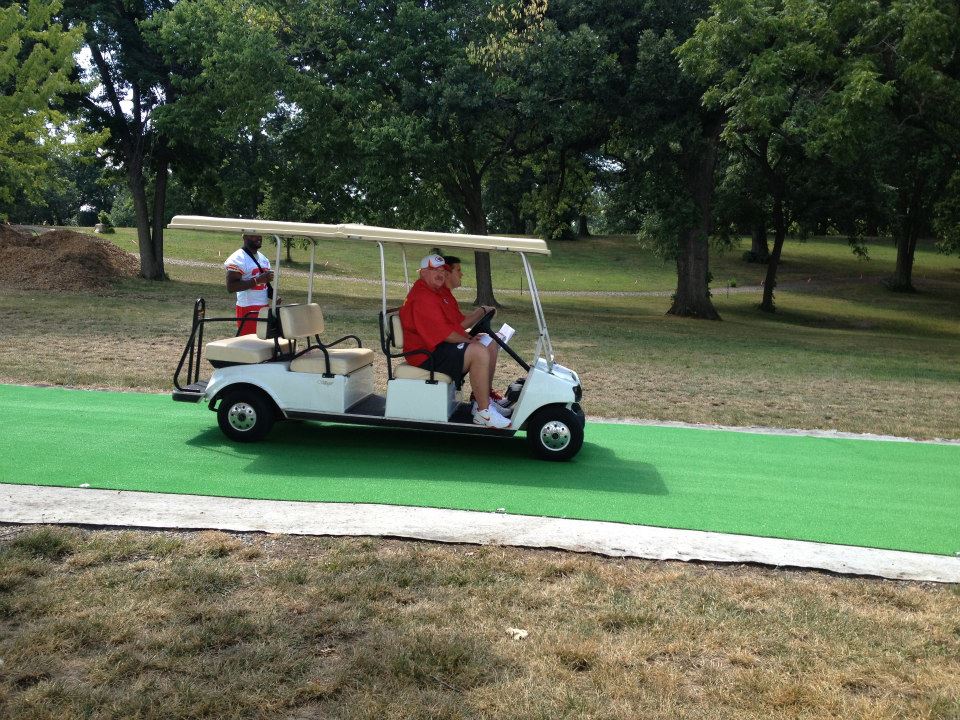 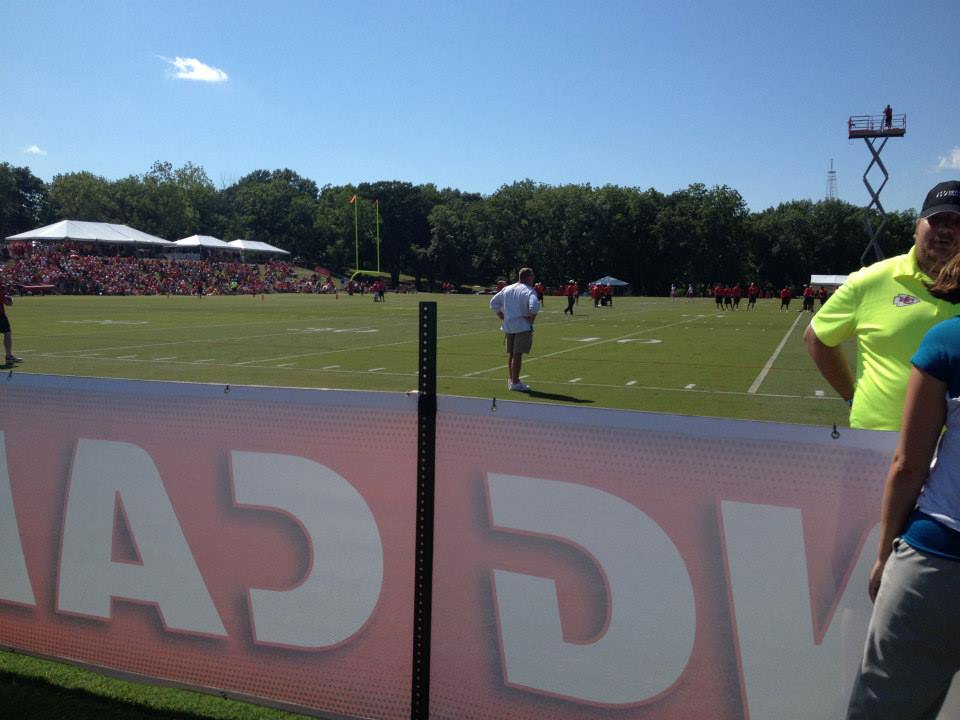