Day one of KC Chiefs training camp is in the books and already there was a scare. Dwayne Bowe was placed on the non-football injury list prior to camp and did not participate in the first day. But it's OK, folks. He just has a virus.

I just got done watching very first Andy Reid training camp practice. And it was fast. That's the buzzword you'll be hearing all the time this offseason. Fast. Up tempo. Little time wasted. Efficient. All those things. From an outsider's view the KC Chiefs clearly had a plan when practicing.

I have lots of observations about today's practice, the very first one in St. Joe but before I get to all those I need to update you on the status of Dwayne Bowe.

If you don't read any further just know this: He's fine.

The players were walking onto the field in St. Joe to cheers. Jamaal Charles, Eric Berry, Alex Smith, and the whole gang were walking down the big hill from the Chiefs facilities in St. Joe down to the practice fields. Everyone was either wearing their helmet or holding it.

Except Dwayne Bowe, who came jogging down the hill in a bucket hat but not helmet. In fact, this is exactly what I saw: 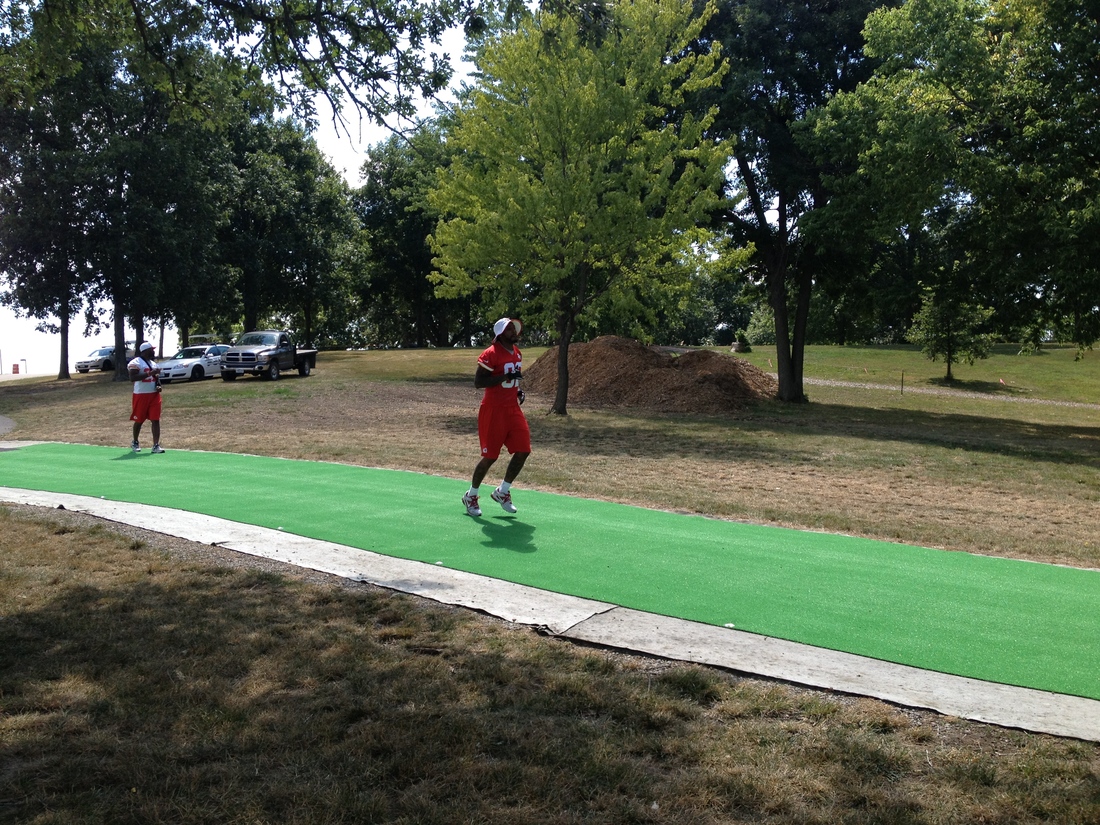 I asked him as he was walking by if he was going to practice but he didn't answer (perhaps he didn't hear me).

So during practice, Bowe is off to the side with three other guys -- Buddy Jackson, Malcolm Bronson and Marcus Dixon Two of those guys -- Jackson and Bronson -- were hurt, so that had me thinking that Bowe, too, was hurt.

I meander over to the far edge of the field where those players are -- take a look at it in the picture below. It's the area behind that white tent in the distance. The two fields are on the right. 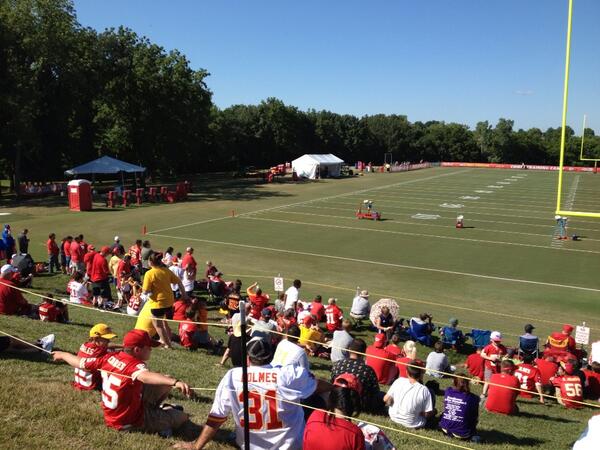 And you can only get through by going all the way around from where this picture was taken. So it was kind of a pain to be doing that AND trying to watch practice. But Bowe is Bowe so I thought it'd be worth skipping a few minutes of practice.

"When you're not practicing you're doing some things, some work," Reid said. "We have a variety of things to keep them occupied."

Standing behind that white tent is Bowe, the three other players and some sort of trainer. Now, I've never done yoga before (my Mom does) but they had what appeared to be yoga mats, doing some sort of stretching. I'm not up on what the latest workout techniques are -- actually, it'd be more accurate to say I've never known what those techniques are -- but it was bizarre. 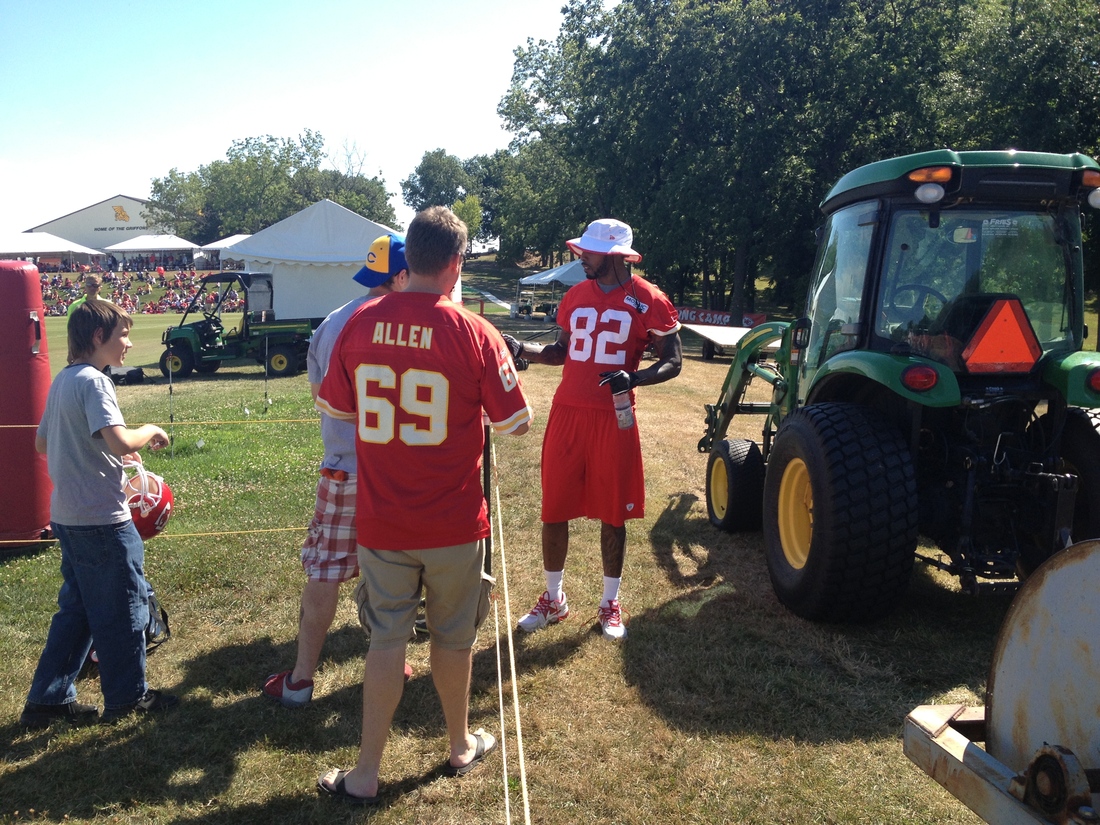 D-Bowe goes to the other side of the field. He gets a bottle of water. But he mostly stays in that area.

Then the news comes down from NFL Network, seemingly out of the blue: Dwayne Bowe was placed on the NFI list.That means non-football injury which quickly made me think he just failed his physical. That's what the prediction was from those around me, which was strange because Bowe hasn't had an issue like that in years.

Of course it was wrong. We were told Andy Reid would address Bowe's injury at his postgame talk. And that's what he did. 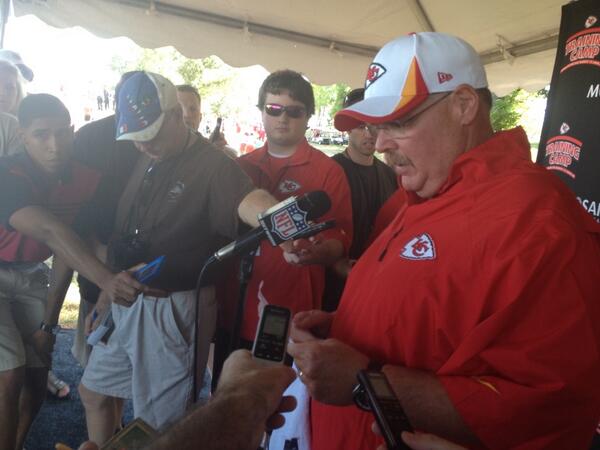 "Dwayne Bowe has a virus," Reid started off with his press conference, looking at his notes. "He's sick, he's not feeling well so he didn't practice today.

"I think he's gonna be back here pretty quick."

I asked Reid again at the end, just to clarify, that Bowe was expected back as soon as tomorrow.

One other notable injury note: Dunta Robinson went down with an injury, walking gingerly off the field. Turns out it's probably nothing. "He had a spasm in his hamstring today but I saw him over there catching balls so I think he's going to be OK."