Derrick Johnson, the KC Chiefs Pro Bowl linebacker, arrived in St. Joe for Chiefs training camp on Thursday and talked to the media about whether he's old, his new roommate and the start of a new training camp.

So let's just go ahead and ask it:

A reporter from the KC Star, Randy Covitz, asked an interesting question to Derrick Johnson as the Chiefs linebacker arrived on the campus of Missouri Western State University on Thursday. How many Pro Bowl-caliber years does he have left?

Just in: Mardy Gilyard has been cut

"I still feel young," DJ said. "I'm moving as fast as I've ever moved before. I've been working out, working my butt off this season. Just to get back with the young guys and get this thing going."

In the NFL world 30 is entering the "old" category.

DJ was a member of the 2005 draft class, which was over eight years ago. I'm having one of those "Has it really been that long?" moments right now. I can remember where I was sitting in the living room while watching that draft and watching the Chiefs pick DJ. Now he's 30 years old and there are "senior citizen" jokes. (Really)

"I'm in the prime of my career right now," DJ said, "so I'm just living life and doing the best I can do right now. Hopefully I won't decrease any anytime soon."

At this moment he really is in the prime of his career. He's been playing the best football of his life the past three seasons, seemingly getting better each year. Now that this question has been asked, it will probably come up next year. And the year after that. Hopefully a few more years after that, too. 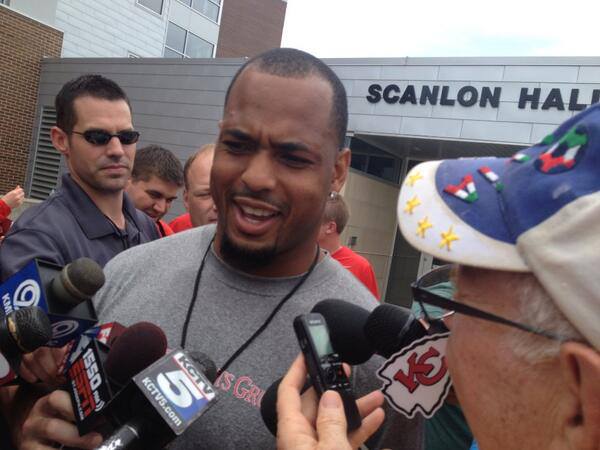 "We have a really good team on paper"

I like that he put that "on paper" there. Because that's really what it is. Outside of a new tackle, defensive end, corner and quarterback (which, admittedly, is important), this is the same team from last year. And we all know how that went.

On paper, the Chiefs do look good. Just like they did at this time last year.

"I don't know yet," DJ said. "I'll figure that out when we get on the field. I've heard Andy Reid runs a pretty tough camp. I've been through some tough camps so it will just make us better."

Yes, they sleep in the dorms. This would be an interesting pair.

"We've been through a lot together," DJ said. "It'll be good bonding."