Chiefs training camp 2013: What you missed as Andy Reid, the rookies and QBs arrived

Andy Reid and the Kansas City Chiefs rookies and quarterbacks arrived on campus at Missouri Western State University on Monday for the unofficial start of the KC Chiefs 2013 training camp. Read on for what you missed yesterday.

Share All sharing options for: Chiefs training camp 2013: What you missed as Andy Reid, the rookies and QBs arrived

For everyone that was around on Monday, this will be a review. For everyone else, find out what you missed as the KC Chiefs rookies, quarterbacks and injured players arrived at training camp. The rest of the gang (i.e. the veterans) will report on Thursday with the first official practice scheduled for Friday afternoon. See the Chiefs 2013 training camp schedule here.

What's going on this week?

As noted in this post, the basic schedule for this week:

Before the veterans arrive on Thursday, the Chiefs rookies, quarterbacks and injured players will practice in the morning and have a walk-through in the afternoon. There will also be meetings in between that. They are allowed to arrive before the rest of the veterans on Thursday.

In attendance are the rookies, four quarterbacks and handful of injured players, including Tony Moeaki and Donnie Avery. 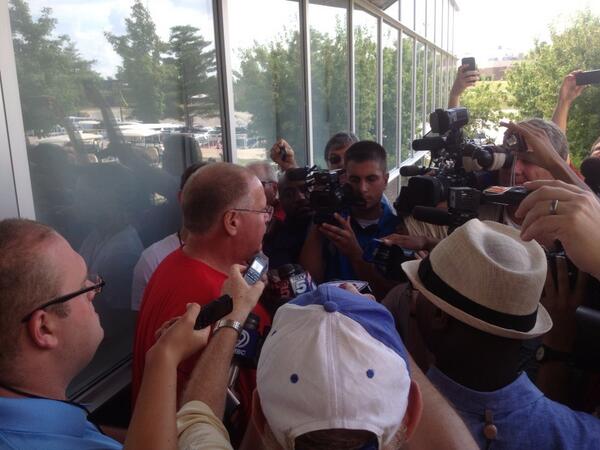 Eric Fisher not yet in KC

Fisher has not signed his rookie deal yet therefore he is not in camp. It's not clear what the two sides are negotiating over but Reid doesn't seem too concerned about it -- yet.

"Well you would want him in tonight, that's what you'd love," Reid said, via comments from the Chiefs, "but I understand how these things go, I got it. I don't worry too much about it. This is probably what I told you when Albert was missing out. I don't worry about that, I try to concentrate on the guys that are here and we go with it. As long as there's communication going on, I know it'll get done."

While it would be nice for him to be there now, the real deadline is for him to sign before Friday's 3:30 p.m. practice with all the veterans.

Tony Moeaki and Donnie Avery are cleared to practice

Moeaki had offseason knee surgery and missed all of OTAs. Back in May, Reid didn't sound completely sure Moeaki would be ready for camp but he confirmed on Monday that Moeaki is indeed cleared.

The same goes for Donnie Avery, who was out for much of OTAs with a hamstring injury. He's back and ready to play, according to Reid.

Shaun Draughn, who missed time in the offseason with a sports hernia, is also back.

Those are the notable injury updates coming out of day one.

Weather report: It's hot as hell!

Well, yesterday it was hot. Reports said Alex Smith was sweating as he talked to the media. Oh, and for some reason Alex wore a long sleeve shirt and pants. Must be that west coast lifestyle. 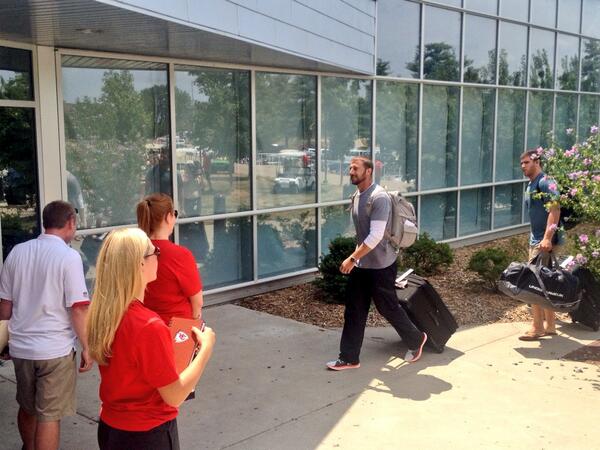 "I think they will get ‘climatized' if that's a word," Reid said on Monday. "It's warm and humid up here so that will be a bit different. They won't be in pads. They will be in their jerseys and helmets and that's what they'll do. They'll get used to the humidity and again we're going to test them with the number of plays going in."

"We're going to tackle to the ground and it's going to be a physical camp," Reid said.

Awesome. Pads can't come on until after three days of camp so be on the lookout for that.

"It will be a challenge for them," Reid continued. "I mentioned that to you guys and I mentioned it to the players before we left. They have to come back and they have to be ready to go. It will challenge them. That's what it does and that's what this game is about. It's a tough game. Tough guys play and it's a tough game to get yourself ready for. It's a long season. This is building the foundation for that and we're building for that right here.

"At the same time, you have to stay sharp mentally. So through all this heat, humidity, sore bodies, you have to crawl yourself out of bed, and get yourself some nutrition, food in you, keep the liquids in you and then you have to come out here and perform." 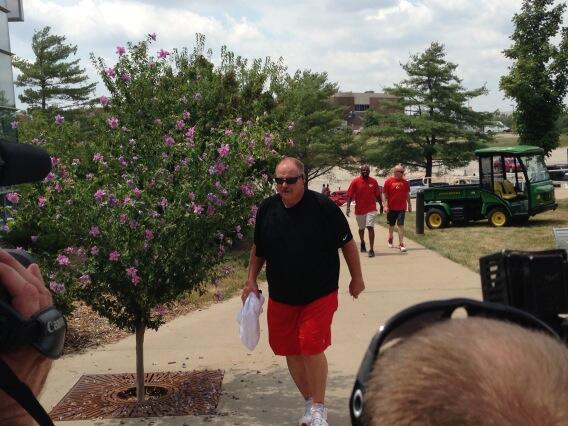 Reid enjoys going away to camp

The trend now-a-days is to stay home for camp. The Chiefs instead are traveling to St. Joe, which Reid doesn't mind at all.

"Well, I do like it," the Chiefs coach said. "I like the idea that we're all here together and there are not a lot of distractions up here. You have your food right across the street, training complex up the street just a bit. You're all housed together, meeting rooms and everything. Everything is right here. I like that. It eliminates some of the distractions and brings in a little bit of camaraderie. It gives you guys something to look forward to."

Photo of the day 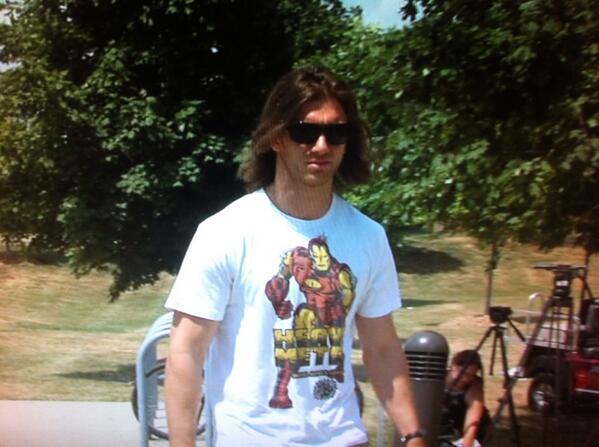 Nick Jacobs, @Jacobs71, has a lot of pictures of the Chiefs crew arriving.

The Kansas City Star has a photo gallery.

The St. Joe News-Press also has a photo gallery.

More pictures can be seen here.

Q: Are there things that Harbaugh taught you that you know you'll carry over to be successful? Alex: "No. There is no one thing like that."

So true: "I think every team in the NFL has positive expectations right now," Alex Smith said. "Every single one."

Sanders Commings said he hasn't been in a dorm in 3 or 4 years. Chiefs players are staying in dorms.

Mike Catapano, Princeton graduate: "I’ve had one love of my life so far and that’s been football."

Alex on his goals: "To win the first game"