Branden Albert, Kansas City Chiefs do not agree to long-term contract before deadline

The two sides had until Monday afternoon to negotiate a long-term deal but it didn't happen. Albert remains a Chief under his one-year franchise tender.

Share All sharing options for: Branden Albert, Kansas City Chiefs do not agree to long-term contract before deadline

The 4 p.m. deadline has come and gone, and it looks like Ryan Clady is the only one of eight tagged players to get a long-term deal.

The Branden Albert thing never really got off the ground today. No deal there, and not sure how far Chiefs really wanted to go on that.

Branden Albert WILL be the KC Chiefs left tackle in the 2013 season. But we don't know how much longer he'll be sticking around.

That's the takeaway from today's franchise tag deadline, which stated that those players under the franchise tag had to sign a long-term contract by this afternoon or else they will be forced to play out the season on their one-year deal.

The deadline passed with no deal, which means Albert does not have a long-term deal and will play out the season on his current one-year deal.

Full coverage of the Albert situation 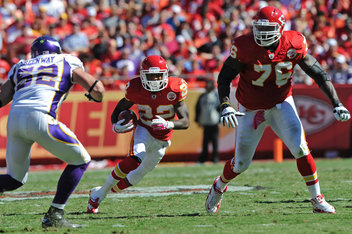 This also means that the Chiefs are setting themselves up for the same situation next season that they faced earlier this year. Albert is scheduled to become a free agent after the 2013 season which means the Chiefs will either need to sign him to a long-term deal or franchise him again, as they did earlier this offseason. Tagging Albert again will secure his services for another season in 2014, but it will come at a cost. Not only will Albert probably not want to sign another franchise tag, but tagging a player a second time means the player is due 120 percent of his previous year's salary. For Albert, that's nearing $12 million if he's tagged twice.

I don't know if the Chiefs will ever reach a long-term deal with Albert. It's just difficult for me to go from them (openly) trying to trade Albert, as they did on draft weekend, to paying him millions in a multi-year deal. It just doesn't seem logical that it would work like that. For that reason, I continue to believe Albert and the Chiefs will not agree on a long-term deal in the future.

This leaves plenty of questions unanswered, notably what will happen to Albert after this season. The way I see it, the Chiefs have already tried to trade Albert, drafted a player No. 1 overall who could be the left tackle of the future, and failed to sign Albert despite a summer of negotiations .... so I can't say I'm optimistic about him staying in KC beyond 2013.