To the highlight film with Kansas City Chiefs Tyler Bray

Walk through this Tyler Bray highlight video with commentary from MNChiefsfan.

Share All sharing options for: To the highlight film with Kansas City Chiefs Tyler Bray

I spent 10 wonderful minutes reading Relaxing Poo's fantastic post on new Kansas City Chiefs quarterback Tyler Bray yesterday (seriously, read it. Highly entertaining stuff. And it's written by a guy who calls himself "Relaxing Poo," so it's got that going for it).

After reading, I started thinking it sure would be nice to go back and watch all of Bray's senior year snaps and present a full breakdown on him.

Then I remembered I have a job. That's the worst.

So instead, I'm going to do this in the same style as I did with Travis Kelce. It's a good day to write a running diary of a highlight video. Of course, we won't learn much. But it'll be faster and more fun. I'm pretty sure "fast" and "fun" overrule "educational" 95 percent of the time.

0:04- And.... we're muting. I don't care what happens the rest of a song, any time you're starting with some dude saying "Oh God" like he's in the throes of passion with the overused-in-rap chiming bells beginning (or whatever that is), you're starting out poorly. When did I become old enough to whine about current music? Was rap always this bad and I was just stupid when I was a teenager? I feel like it was better. Like, a lot better. I blame Nelly.

0:05- So apparently these are just 2012 highlights. So take that for what it's worth. I COULD spend some time trying to find a film of his whole collegiate career but... nah. Someone should find a 2010 video and compare it to this video, seeing if there are differences. I will not be doing this.

0:09- I've just re-watched the previous three seconds about 20 times (at least I'm saving time for actual work, amirite?)... what in the name of all things holy is Bray DOING? I'm going with "slain in the spirit" on this one. It's either that or he's having a slight stroke. 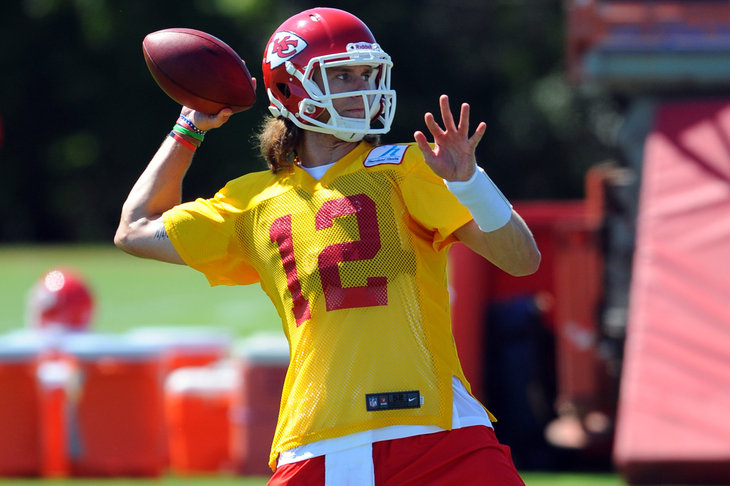 The battle for the Chiefs third QB continues with one report stating Ricky Stanzi is ahead of Tyler Bray due to how well he knows the offense.

0:12- OK, the video just picked up a little. And by that, I mean "Tyler Bray just threw a ball 55 yards in the air to hit a WR in stride." That is my definition of picking up a little.

0:30- After watching the same play a couple more times (thank you for the multiple angles, video guy!), I have confirmed it: that cornerback got absolutely torched. He should go home. Maybe lay down for awhile. Think about his life choices. Maybe seek a little counseling.

0:42- Once again we're treated to the same play twice from two different angles. I'm running pretty fast and loose with the term "treated." Call me crazy, but it looked like Bray scanned the field for a second there. I was under the impression (at least based on what I read in the comment sections on AP) that Bray is incapable of the mental processes required to scan the field, or even turn his head. So that's a nice surprise.

0:51- That was a great catch. Of course, Tyler Bray did not make said great catch, so I am unsure as to why the catch is shown here, on Tyler Bray's highlight video. 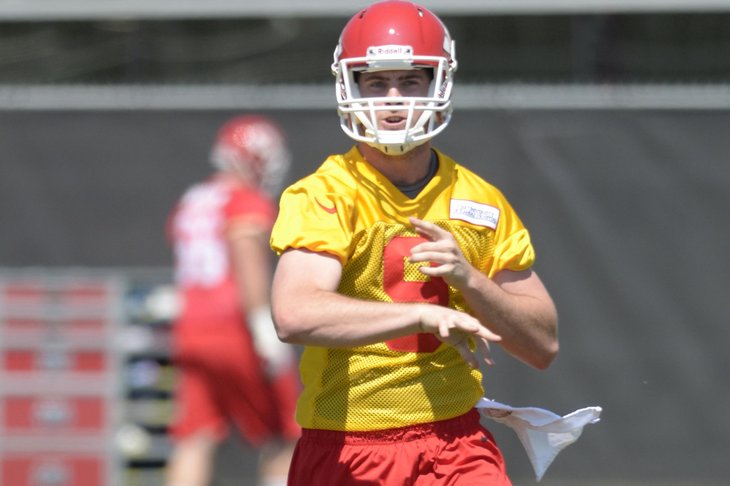 "Yeah, I'll tell you, he did a nice job," Reid said. "He did a really nice job. You never know until you get them here."

0:54- I'm pretty sure the maker of this video got a film degree at Redundant Double Shots U. Of course, I have no idea how to even make a video, so I'm not sure what gives me the right to complain about such things.

0:57- I'm completely disoriented. Where are we? And why are we not getting a 3rd shot of that great catch?

1:01- I can't even imagine the temptation to just GUN the ball to a RB on plays like this. Especially if he's a bad wingman or owes you money.

1:09- In case you were wondering what announcers mean when they say a QB threw the ball "on a rope," Bray was kind enough to provide a perfect example. I don't even mind the replay. He freaking GUNNED that thing in there. About 25 yards and the ball got there in roughly .003 seconds. If he would've thrown it like that on the previous highlight he would've vaporized the RB.

1:25- Upon further review (MOAR replays of the same play!) that was a heckuva catch too.

1:36- A solid throw under pressure. What is it about Bray's throwing motion that bothers me? I see him throw and I feel like the ball should travel 5 yards.

1:43- The great thing about a good back-shoulder throw is that one second after when you see the defender standing there and know he feels really, really stupid. "But I thought he was gonna keep running, coach!"

1:54- Ah, the ever-difficult "rolling to the left" throw. Nicely done. On a side note, Tyler Bray is not an athlete. I mean, he's not Mike Glennon out there, but he definitely isn't going to be Kaepernicking any time soon.

(Quick intervention. Hey, Colin Kaepernick, it's a really terrible idea to make fun of fans for having "too much time on their hands" when they get mad about you wearing the gear of another football team. If said fans find ways to fill that time, you're out of a job. Just throwing that out there. Remember, it's that same rabid obsession that makes them cough up thousands of dollars in tickets, parking, etc., and that same rabid obsession that makes television networks willing to give the NFL hundreds of millions of dollars. I wouldn't toy with it. That's just me, though. Back to the highlight film!) 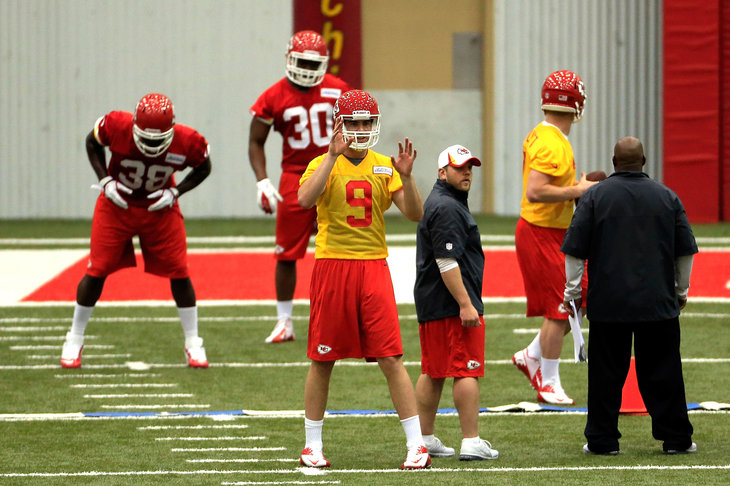 See what MNChiefsFan says about Tyler Bray in this mailbag.

2:04- My favorite part of this play (other than, you know, the relatively effortless 50 yard plus bomb) is how hard he sells the play-action fake. Quarterbacks should do this every single time.

2:20- This is why highlight films should stick with a traditional view for the most part. I have no idea if that was a good play or not. But at least we got to stare at the back of 24's jersey for most of the play.

2:26- The advantage to being able to throw the ball really hard and still be accurate is clear on plays like this.

2:36- This might be my favorite play. He stepped up in the pocket, stayed calm under pressure, and fired an accurate 30 yard pass while moving to his left.

3:09- After a series of throws I thought were "OK," we see another "whoa" throw. I really like how quickly he got his feet set, and the fact that he can get the ball 50 yards downfield without even looking like he's trying hard (of course, the whole "not trying hard" thing is allegedly part of his issue, so maybe that's a negative? I'm so confused)

3:15- When I talk about how much offense Matt Cassel and Brady Quinn cost us last year because of their inability to hit receivers in stride, this is the type of play I'm talking about. It can be the difference between 5 yards and a 50-yard touchdown.

3:27- I thought the rule is "don't ever, ever pump fake at the receiver you're about to throw to?" Of course, when said receiver is so open he could have chopped down a tree without hitting a defender, that rule may not apply.

3:33- You know when you're so happy you just gotta kick? I call this celebration the "Dexter McCluster." Of course, Dex usually swings the leg too. Give the kid some time, though. He'll learn.

3:43- I always love the QB point. "Hey, I'm going to throw it to you now! Hopefully the defender doesn't realize what I'm going to do! Here it comes! Ready?" That said, that was a bullet of a throw. Call it even?

3:56- I think my hand would get torn off if I tried to catch that ball. If Bray doesn't make it, it will definitely not be for lack of an arm (cue Ryan Leaf, JaMarcus Russell, and other super-original negative comparisons).

4:37- A nice throw while on the run. But more importantly, isn't it time college football forces players to get both feet down? I mean, taking aside how much easier it is to get one foot down (don't CB's have a tough enough job?), 83 looks like he's going to strain something stretching out like that.

4:44- I very much appreciate being informed that what I just watched were Tyler Bray highlights. This prevented me from a world of confusion wondering why Jamaal Charles was playing quarterback for Tennessee. And white. 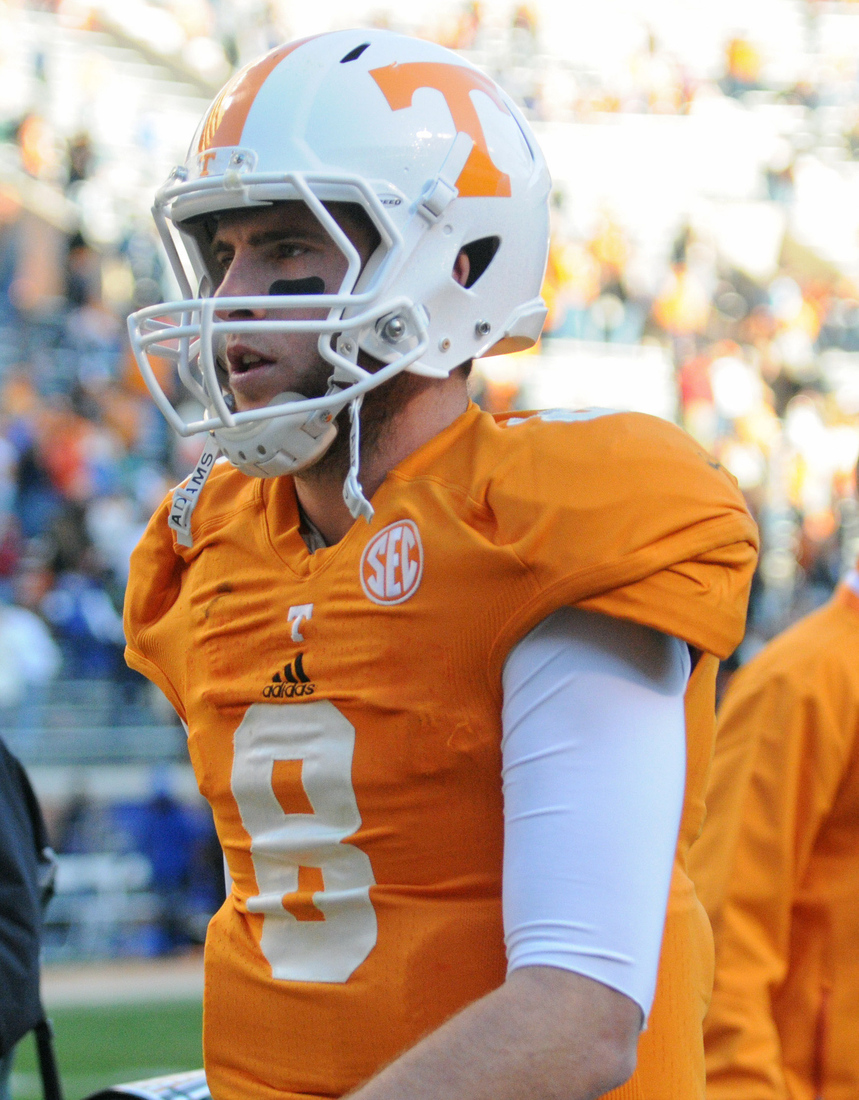 So with that behind us, I think we can safely say we learned that Tyler Bray has a heck of an arm and can throw pretty accurately on a highlight reel. Glad I could help with that. All jokes aside, the kid has got talent. Lots. I'm with Relaxing Poo on this (it felt really right, saying that); Bray's got a shot at doing SOMETHING. When does preseason start? I'm very excited for the Tyler Bray bandwagon. If what happened with Trick Shot Tanney last year is any indication, all it'll take is one incomplete pass that kinda-sorta looks like it was thrown accurately. Go Bray!

Of course, he could also completely flame out. So there's that.