A trip down memory lane on this Monday afternoon....

Everyone remember KC Chiefs defensive lineman Neil Smith? If you said yes, you're probably envisioning that nose strip he always wore. Or perhaps you're thinking of his classic home run swing celebration he did after sacks. It's the latter that has us revisiting the 'ol days.

Believe it or not, Neil Smith's famous home run swing actually started off as a golf swing. Yes, a golf swing. 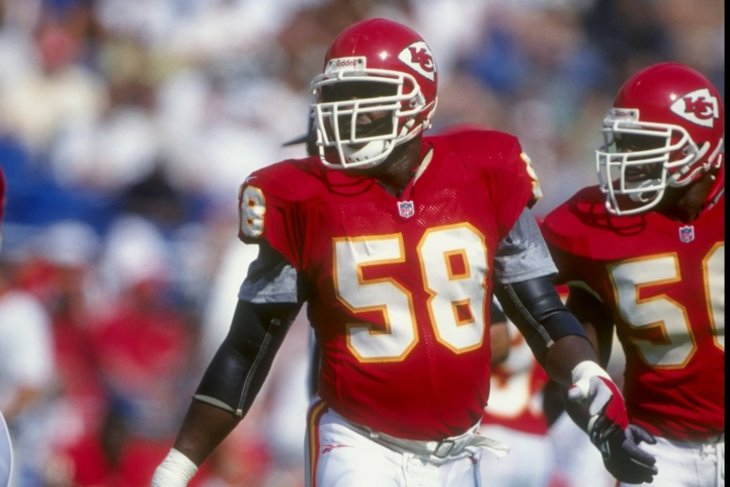 "It came to me one night between me and Derrick Thomas," Smith said on 610 Sports last week. "I was sitting there, I was like, man, Derrick has his thing where he gets up and he throws his hand up, like if he wants to give a safety or a sack and he gives his little thing. So I said, 'I got to give something for the fans to remember.' So i said to myself, 'What am I going to do?' I got to create something to give the fans back.

"So I get there, I'm sitting there, it's Friday night, and Jay Leno came on the late night show and we had like a Monday night game. And Jay Leno hit a punch line and went "Ba ba ba ba" and he swung. And I stood up in my bed and I said, 'That's it! That's what I'm going to do.'

"I didn't know Jay Leno was a golfer so it was like a golf swing. I said, 'Alright cool I'm gonna do that.'

"The very first one I did it was a golf swing. In that game, we played I think the Raiders, I end up with like three or three and a half sacks.

"I'm sitting ther at the podium now facing the media and they want to know, "I see you got this brand new thing going on.' And I said, 'Yeah I do.' A reporter says, 'Can you explain the swing that you have, is that a tribute to George Brett?' And I said, 'Absolutely. Tell George Brett I'm gonna get 3,000 sacks and I'm gonna break his record.' It just took off after that."

And that is how a legend is created.

Did the Chiefs improve? FB edition