The Kansas City Chiefs have completed their OTAs and they have two more days of mandatory minicamp before summer vacation begins. I spoke with Metro Sports' Nick Jacobs (@Jacobs71), who has attended most of the OTAs, to get his take on what he's seen out there.

1. Who is an under-the-radar player who has stood out this offseason?

I would say my under the radar player is Travis Kelce. He had a case of the drops one day in OTAs but since that time, Kelce has consistently gotten better. A lot of ability I saw on his college tape is starting to show up on the field. Anthony Fasano and Kelce have both been very reliable.

2. What's the biggest surprise you've seen so far at OTAs?

Former bball player hopes to make it in KC 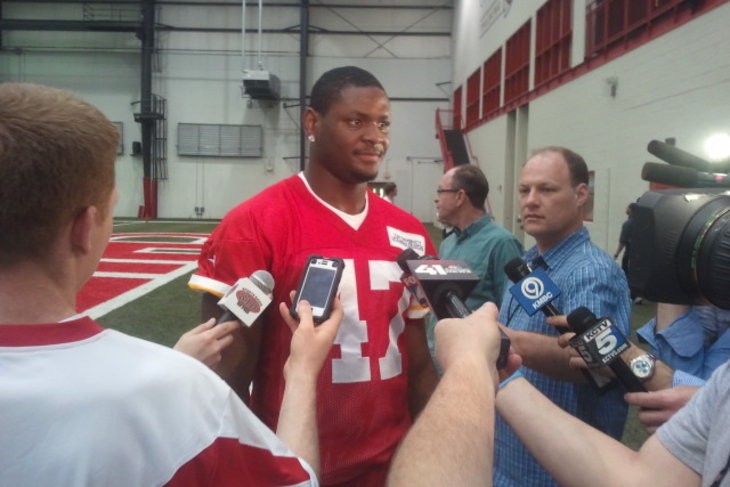 My biggest surprise would have to Demetrius Harris and Nico Johnson.

The fact Harris has not played college ball and has made the transition to the football field this quickly is impressive. I see a very athletic guy with a big body. In a tight end that is a very good combo. Harris does a great job of using his body to create the necessary separation. He has shown his ability to pick up the proper fundamentals and continues to grow.

Nico Johnson has really good athletic ability that has flashed on the field. The biggest question on him was how are his coverage skills. I have watched him in drills and feel comfortable with his ability to grow in coverage. He has the athletic ability to do it. It is just a matter of making sure he becomes comfortable.

3. After these OTAs, predict what the Chiefs starting secondary will look like next season.

How does Robinson fit into the Chiefs defense? I went back and watched five games from Robinson last season and broke down what I saw in those games.

4. Is there anything to gain by watching the offensive and defensive linemen without pads? Has anyone stood out on either side of the line?

You only gain one thing from watching the line: if they are using proper technique. Is Eric Fisher taking the proper reach step? Is he getting to the second level quickly? You can answer those fundamentals/athletic ability side of it. But half of being a lineman is jolting a player with your punch to get them off balance and control them. So until the pads come on you can't gauge that factor.

Eric Fisher's mental makeup has impressed me. The game doesn't seem to big for him.