Jamaal Charles, the KC Chiefs running back, stopped by the NFL Network studios for a talk with Total Access.

Share All sharing options for: Jamaal Charles says he 'gets the goosebumps' thinking about Andy Reid's offense

Kansas City Chiefs running back Jamaal Charles was making his tour around the NFL Network compound on Thursday, and had plenty to see while wearing a pair of hilarious pink (red?) pants and matching bow tie.

Talking with analysts and former players Shaun O'Hara and Willie McGinest, Charles had nothing but good things to say about his new head coach Andy Reid. To see the video clip, click here. A few quotes below...

The main man discussing his thoughts on Reid's system:

"I'm just excited man, I can't wait. I get the goosebumps when I start talking about it because his system is so perfect for me. Having me look at what he did with LeSean McCoy and Brian Westbrook in a similar offense. The sky is the limit for me in this offense. I feel like I could be one of the top running backs you guys are talking about next year."

Charles talking about his roles in the new scheme. Defenses have been warned:

Clearly, Reid is trying to pump up a team which was beaten down last season:

"He tells me 'You're the fastest one on the team Jamaal. I don't care who lines up against you, a cornerback, a free safety, you can beat them.' He just gives me that confidence to go out there and be better."

"He's the man. We believe in him, we trust in him. We want him to make plays for us. We've got Dwayne Bowe and Jon Baldwin on our side, we've got to find ways to get the ball to them." 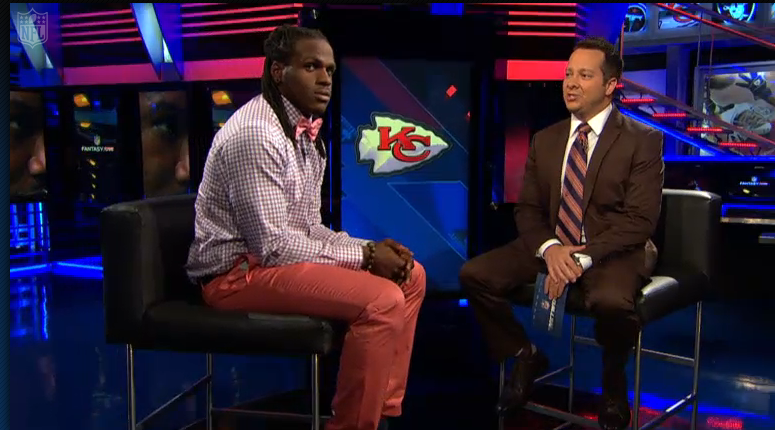 This is the right type of talk:

I think this offense opens up the big picture for him. He can throw the ball up the field, his arm is crazy and I can't wait."

Who knew Jamaal Charles was so quote-able?