See what a 49ers fan had to say about his former QB Alex Smith.

Share All sharing options for: 49ers fans say they'll be following the rest of the Alex Smith story

Over the past few months we've seen a number of our new friends from San Francisco weigh in on the KC Chiefs. That's of course because of Alex Smith, the former 49ers QB. Many of these 49ers fans are coming from SB Nation's 49ers blog, Niners Nation, and they've written neat stories about Smith and also pointed us in the right direction on other neat things about the Chiefs new QB. These examples come to mind:

We have a new one today. Reader mwright84 wrote the following as a comment on another post, but I thought it deserved a little more attention. Agree or disagree in the comments. Here's the whole thing:

"Hope you don't mind a 'Niner fan commenting on your board.

"But I've been reading your site for weeks, observing the back and forth about Smith, and wanted to share with you one die-hard 'Niner fan's take on Smith. 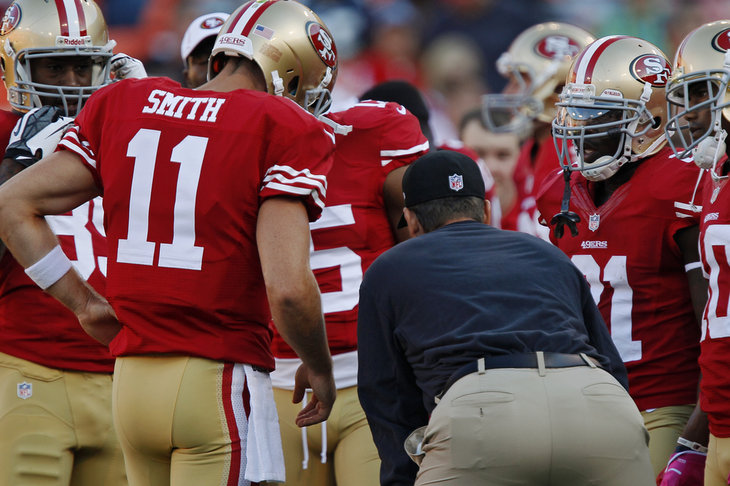 "The headline is, while I think the ‘Niners made the right move going with Colin Kaepernick - a kid with unusual skills and huge upside - Alex Smith was really coming into his own at the same time and, as seems to have been the case for most of his pro career, got blindsided yet again by circumstance. What might've been one of the best redemption stories in modern sports lore became instead another story of opportunity just missed. He didn't get traded because he can't play or win - he got traded because the 'Niners had a guy behind him who might end up re-defining the position.

"I've seen literally every down of every game of every season for the last forty years (I'm 51). I watched them draft Smith and, like many other Bay Area fans, had great enthusiasm for the choice followed by ‘draft bust' despair. Without going into boring detail, I can honestly tell you that, in my opinion, his pre-Harbaugh bust-status was 90 percent getting thrown into a franchise in absolute disarray, and 10 percent his own failing.

"The personal failure was his incredibly irritating inability to pull the trigger and just play... you could see the guy over-think EVERYTHING, from his rookie season through the end of the Singletary era. So much has been made here on these boards about his football intellect, and he definitely has that - but when he starts over-thinking the game, he's static, doesn't press the advantage, and as advertised, checks down to the least risky option, no matter the circumstance. And when a team is down and in need of a spark, as a fan, that is damn maddening to watch.

The personal failure was his incredibly irritating inability to pull the trigger and just play... you could see the guy over-think EVERYTHING.

"I came to the conclusion watching him blossom under Harbaugh that most of that indecisiveness, safe play, and lack of spark was the result of his playing in inferior systems with clueless coaches and questionable talent around him. He started playing not to lose. Mike Nolan was an authoritarian show-off, a defensive mind with no clue how to develop a rookie quarterback, let alone an offensive game plan. He publicly challenged Smith as soon as things began to go south, and in an effort to save his own job, basically blamed the team's offensive failures on Smith's lack of toughness.

"Anybody who has watched Alex play knows that, whatever his failures, lack of courage isn't one of them. In fact, it was revealed later that he probably played much longer than he should've with a seriously injured shoulder, a bad choice that might've contributed to a loss of velocity on his passes once he finally had the surgery required.

"Nolan rolled through a succession of offensive coordinators, one a year, most of them second tier choices. The one genuine offensive mind he had on the staff - Norv Turner - produced Alex' best pre-Harbaugh year - and then promptly left.

"When Nolan was replaced by Singletary, the team tried substituting inspirational speeches for player development and game planning. Other than turning around Vernon Davis' career, it can be argued that Singletary did almost nothing right for the team. Among the many disasters was the further undermining of Alex Smith. Three more second (third?) tier offensive coordinators (Jimmy Raye?) who were hired because they believed in Singletary's retro offensive philosophy - run, run, throw a screen pass, punt - then get back on defense which is more fun anyway! An offense that was so bad Peyton Manning would've thrown for 2000 yards a year. When Singletary began to fail, he too started to blame his QB - publicly humiliating him on the sidelines in front of a national TV audience after a truly disastrous scramble / fumble collapse. It was ugly. the whole thing was ugly.

"Then... mercifully.... Singletary was gone. 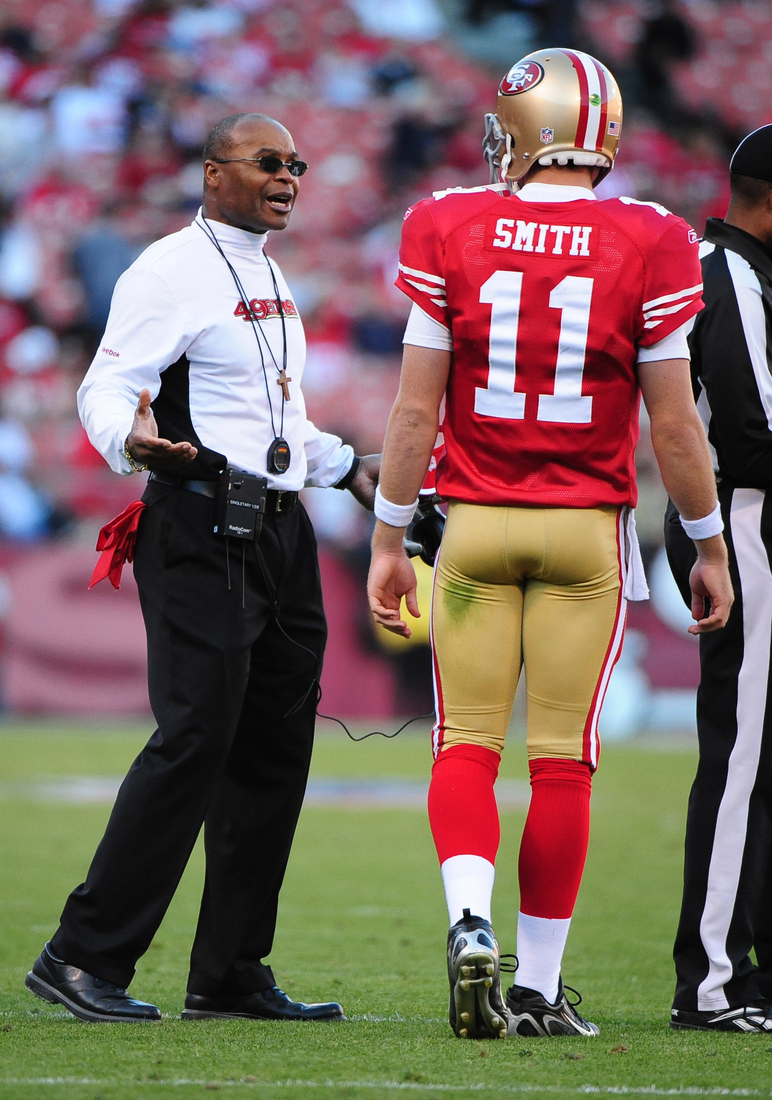 "And then a strange thing happened. Jim Harbaugh - a football coach who knows how to develop players and a game plan - announced to everybody that Alex Smith was his guy -- before ever working with him at a practice. It was a surprising show of faith that surprised many fans who assumed Alex would leave town. And overnight, the green shoots of the Alex Smith who had been so unstoppable with Utah began to slowly re-emerge.

"The guy you're seeing now, taking over the huddle and being a coach on the field, stepped up. He ran and coached practices during the lockout, a move many credited with giving the ‘Niners a leg up two seasons ago. He mastered a basic version of Harbaugh's offense by the end of the first pre-season game, and a more complete version of it by the middle of the season.

"And in this fan's opinion, while I certainly understand ‘Niners fans who were frustrated that he didn't wing it down the field like Aaron Rodgers, or march downfield with the swagger of Tom Brady, something less flashy but nevertheless truly positive happened. I saw him learn how to win - how to master an offensive game plan to the degree that when the ‘Niners had the ball and were behind, I actually believed they were going to win.

Alex is an extension of Andy 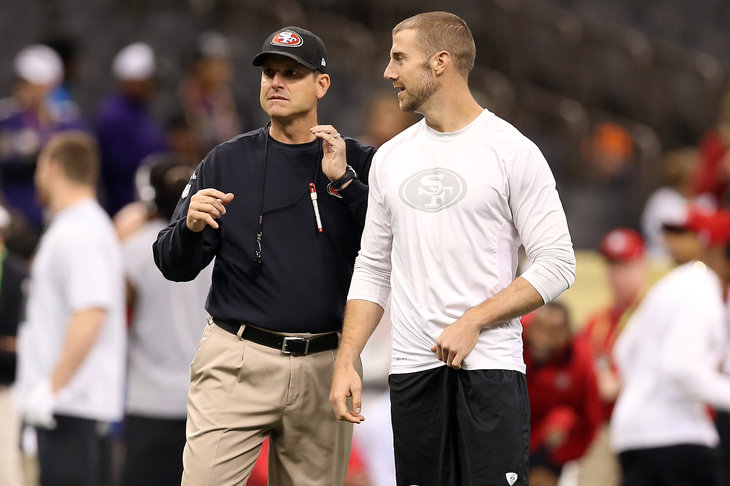 It was a decision that changed a honeymoon into a nightmare, for some Kansas City Chiefs fans, in only a span of eight weeks. Alex Smith is the new franchise quarterback. The decision will continue to be debated for years to come. What most are missing is the reason why this move was made.

"Harbaugh's offense is like three dimensional chess and requires a cerebral quarterback - most plays consisted of several options, and required the QB to read the defense, adjust the line, and call the right version of the play. It was generally understood by ‘Niners fans and the beat reporters that Alex was a savant at this part of the game. He knew how maximize the system to win - which is why Harbaugh liked him, and why Andy Reid probably wanted him. He's an extension of the coach on the field, getting everybody in position to win. And one more thing often overlooked - if you look at the stats, as opposed to hearing and accepting the dreaded ‘game manager' description, the fact is he engineered multiple come from behind, clutch wins. The fourth quarter goal-line throw to Delanie Walker in Detroit, the Philly game, the playoff win against New Orleans... not flashy, but clutch, and consistent. Nolan was wrong about this guy - he was a mentally tough a QB as I'd seen.

Alex was a savant at this part of the game. He knew how maximize the system to win.

"I bleed red and gold, and the ‘Niners are my team. But I'm going to be rooting for you guys (whenever you're not playing the ‘Niners) because I want to see Alex Smith finish his redemption story. My only real question about him is how much strength he might've lost when he injured his shoulder - no one seems to really know. But despite that concern, I think he has the potential to be that rare, inspiring sports story that makes some of us love the game. The grocery bagger named Warner who becomes an unlikely Super Bowl champ. The guy who gave up on baseball only to come back and become a dominant closer. The aging golfer named Nicklaus who improbably wins one more major. I'm going to miss his confidence - his class - his mastery of the offense - and his quiet efficiency. And I honestly believe this guy is going to surprise you and, working under a known QB manager like Reid, earn himself, and Chiefs longtime loyal fans, the satisfaction they deserve.

"Oh, and get used to hearing "yeah, no question", and "for sure" in every other sentence at his post game pressers."