Simple question for you: Did the Kansas City Chiefs improve at running back from 2012 to 2013?

Share All sharing options for: Did the Kansas City Chiefs improve? RB edition

We are starting a new series around here to see just how much better the KC Chiefs have gotten (if at all). We will be comparing each Chiefs position group to how that group looked in 2012. The overall point being: Did the Chiefs improve this position group from last year?

The KC Chiefs running backs start with Jamaal Charles. We know that. We have talked about Charles quite a bit lately, including:

So Charles is great, we know that. Watch the greatness below and let's move on.

The biggest difference between 2012 and 2013 is swapping Peyton Hillis for Knile Davis. Is that an upgrade? That is arguable and it remains to be seen.

Just like last year with Hillis, we're looking at Knile Davis to be Jamaal Charles' sidekick. He has some injury question marks, just like Hillis did. He also has some fumbling question marks, which is the easiest way to get your coach to take you off the field. 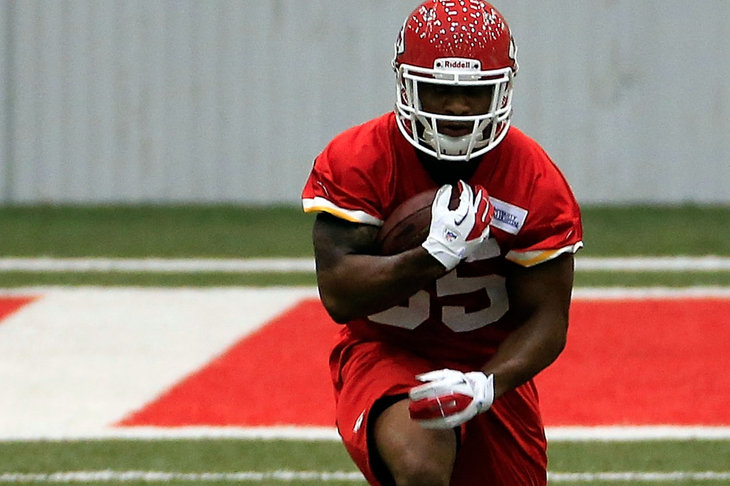 KC Chiefs GM John Dorsey explains how they looked into -- and hope to correct -- Knile Davis' fumbling issues from college.

Davis / Hillis is the key part of this comparison. Jamaal remains there as do Cyrus Gray and Shaun Draughn. Jordan Roberts isn't likely to factor in significantly. So, really, it comes down to whether you think Knile Davis in 2013 will be better than Peyton Hillis was in 2012. Do I think Knile Davis will be more productive than Hillis was last year? Yes, I do.

My final answer: Yes, the Chiefs did improve at running back this year. Despite Hillis being a name player, he just wasn't good last year. Davis should be better despite his lack of experience. I'm generally not that high on rookies in their first year but running back is a position where a rookie can be expected to contribute right away with the right situation.

Do I think Knile Davis will be more productive than Hillis was last year? Yes, I do.

All that said ... the success of the Chiefs running backs in 2013, and the team as a whole, comes down to Jamaal Charles. As Jamaal goes, the Chiefs go.

While we're here, peep this video of Knile Davis saying he could give Jamaal a run for his money in a race:

Previously in "Did they improve?"