Answering questions about the Kansas City Chiefs and... other stuff.

Let's do a mini mailbag. For the record, I'm down to a dozen or so questions. If you don't send me more, baby seals will die. Just saying.

Is Devon Wylie faster than Dexter McCluster? I've wondered why McCluster hasn't made more of a splash in the NFL, with his speed and ability to cut and change directions. Also, I won't say who, but someone told me Jon Baldwin was totally ignored last year, and that Matt Cassel only had eyes for Dwayne Bowe.

Oh Gary. Gary, Gary, Gary. You're falling into the same trap so many are when it comes to the Chiefs former first round pick. The guy is getting more excuses than any other player on our roster. Listen, no one wants Baldwin to transform into a beast more than I do. And I'm the first to admit that the quarterback play last year ranged from unbearable to unbelievable (if you get time, go re-watch a game. It's even worse the second time).

But the excuses have to stop for Baldwin. He was thrown at 46 times last year and managed to haul in 20 of those throws. That's 43.5 percent. You know where that ranks among WRs who saw a 25 percent or more of their team's snaps? Dead. Freaking. Last. Out of 105 players. That's as awful as one AP user's recent admission that he'd never seen Top Gun (still shaking my head over that one. I weep for America's future). 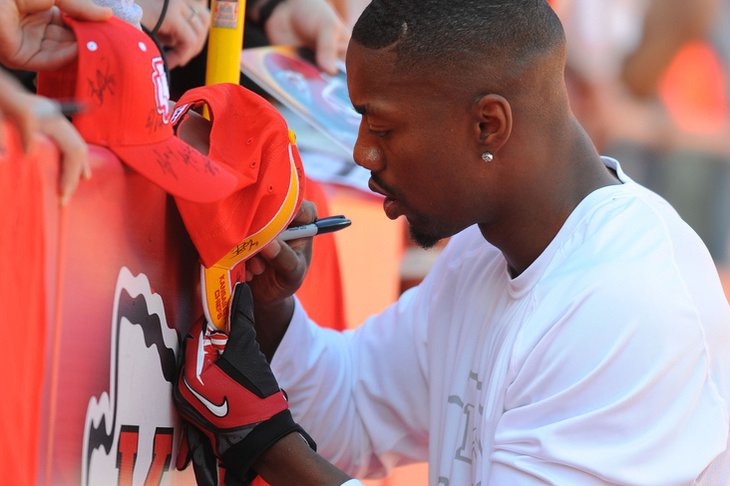 The Kansas City Chiefs can be good with Dwayne Bowe. But they can't take that next step as an offense without Jon Baldwin. Chiefs GM John Dorsey discussed Baldwin's offseason and his strong end to the offseason program last week.

So it's not as though Baldwin was doing something with his opportunities that screamed, "Hey, I should get thrown at more often!" Quite the opposite. And sure, there are a ton of excuses regarding the garbage throws that were coming his way. But Bowe, with the same QBs, caught 55 percent of the throws coming his way (still not great, but worlds better than Baldwin). Dex caught 74 percent of the passes thrown his way, good for sixth in the league. Even Tony Moeaki, who struggled for much of last season, caught 67 percent of the passes thrown his way.

I understand that different receivers see different kinds of throws, which will affect catch percentage. But there is absolutely no excuse for being dead last in the league in catch percentage. Additionally, when Bowe was out for the last three games of the season, it's not like Baldwin stepped up. At all. Two catches in three games. So the idea that Cassel/Quinn's locking onto Bowe was the reason Baldwin didn't break out last year just doesn't hold any water.

And since I've covered Dex numerous times, I'll make my defense of him brief. Unlike Baldwin, Dex HAS produced when given the chance. And unlike Baldwin, he wasn't having any problems getting open last year. He just wasn't getting the ball. The two situations are entirely different in my opinion, which is why I'm so down on Baldwin but more optimistic about Dex.

Oh, and yes, I think Devon Wylie is faster than Dex. I still don't get the obsession some have with the guy, though.

We've all asked ourselves and friends alike what hero would win in a battle to the death. Now any comic book reader knows Stan Lee believes it's best to write them a draw.

Well MN I'm asking you who you think would win in this fight that some feel is the most awesome fight that could happen between super heroes. Let's forget the fact that they come from different universes. Neither hero has super powers. They both merely have limitless pocket books, a tremendous amount of technological knowledge, and a relentless urge to save the world (or the girl if the earth is OK), and a bad ass suit.

Batman vs Ironman. One of them dies MN, and you are now the author of their fate. What say you?

I say that you've missed on the "most awesome fight" between super heroes. I mean, if we're going to cross universes, how is it not Superman vs. The Hulk? The basic premise behind both seems to be that they're practically invincible, right? So who is MORE invincible? Me, I'm going with Hulk, but I'll break that down another day. Anyway, back to your (excellent) question.

First and foremost, we need to determine something... do they know they'll be fighting each other that day, or does this come out of nowhere? I think that determines the outcome of the fight. If both know the showdown is coming, then I gotta give it to Iron Man. If not, Batman takes it.

The reason for this is pretty simple... in a world where they don't know they're going to fight, the legendary paranoia of Batman will still lead him to plan out a contingency for if he has to fight/disable/kill Iron Man. He does it for everyone. Because really, Batman is nuts. So he'd walk into that fight absolutely prepared and with a strategy in mind that tailored itself to Iron Man's weaknesses. Tony Stark, on the other hand, is a "normal" guy. He just wouldn't be prepared for a fight to the death with Batman. Because, like a normal person, he doesn't think about how he'd kill one of the "good guys. So if it's unexpected, The Dark Knight takes it hands down.

Now, if they BOTH know it's coming, it's a lot more interesting. Both are crazy smart, both have tons of technology... it's tough to give this one to Batman with Iron Man's suit. That thing is just way, way, way more ramped up than what Bruce Wayne throws on. At that point, it's basically regular guy vs. superhuman. Not really much of a contest unless Batman somehow disables the suit. And if that suit is disabled, Stark has absolutely zero chance. So in this scenario, there's a little more room for doubt. I'm gonna call it that Stark offs Wayne in this scenario, but it's still close. Mostly because again, Bruce Wayne is nuts. Take the crazy guy in nine out of 10 fights.

Always glad to be able to clear up these things. I think we've got time for one more...

What type of beer do I brew for tailgating? Do I go with just an easy IPA? Go with one of my favorites, hefewiezen? An apple amber ale? Or do I go with a nice seasonal pumpkin ale (game is in October after all)?

Thanks, Kenny (on AP as raginkage)

I'm gonna go ahead and punt this one to the readers, Kenny. I'm not a a brewer (or even a drinker anymore). So help the guy out, AP!