Allen Bailey and sack predictions for the 2013 Kansas City Chiefs

The Chiefs' defensive lineman made a bold prediction of 10 sacks this coming season. It's statistically possible for someone to make the jump.

Share All sharing options for: Allen Bailey and sack predictions for the 2013 Kansas City Chiefs

Allen Bailey, the third year defensive end for the Kansas City Chiefs, came out with a bold prediction for the 2013 season on Tuesday when he mentioned via The Trapasso Report that he wanted 10 sacks on the season. Just to get the quote out the way, Bailey stated:

The Chiefs already have two Pro Bowl pass rushers on the defense in Tamba Hali and Justin Houston. Last year, Houston broke out with 10 sacks after showing such promise in his rookie season. Tamba Hali had only 9 sacks last year after 26.5 over the previous two seasons. However it's clear Hali earns significant attention from blockers and pressures far more than those 9 sacks would imply. 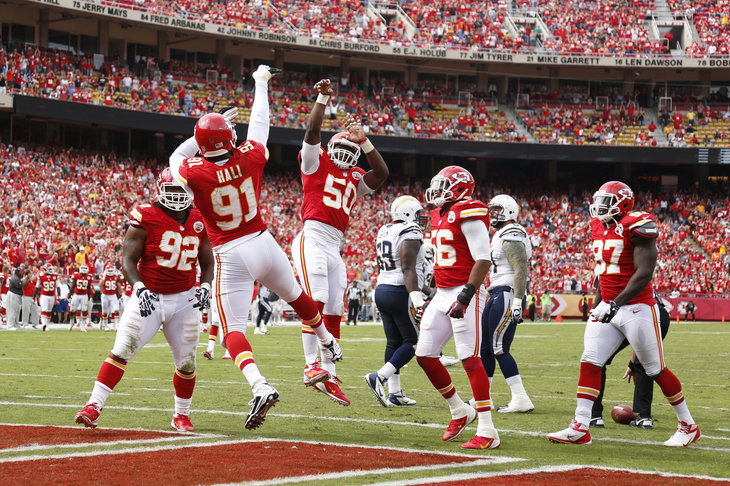 That said, there's plenty of room for another strong pass rusher for the Chiefs to emerge if Bailey, or someone else, wants to make such a jump. Despite the presence of Hali and Houston, the Chiefs were No. 29 in the NFL in total sacks last season. With only 27 sacks on the season, the Chiefs tied the Buccaneers for that miserable total. Only the Oakland Raiders and Jacksonville Jaguars mustered less of a pass rush.

Bailey had zero sacks last season, so it's hard to believe he can move jump to pass rushing force in one season. But if the Chiefs' secondary can stall receivers for that extra second and force the quarterback to hold onto the ball, there's reason to believe that someone can emerge as another pass rushing threat. Houston and Hali are also good bets to increase their sack totals under defensive coordinator Bob Sutton's aggressive defense.

The best teams typically only have two major pass rushers with several other guys who can get to the passer alongside them. The Broncos had Elvis Dumervil and Von Miller last season, but Derek Wolfe and Wesley Woodyard kept schemes honest from loading up too much on those guys. The same could be said of the Rams, who had Chris Long and Robert Quinn as their big playmakers. William Hayes, Michael Brockers and Jo-Lonn Dunbar all harrassed the quarterback enough to make a difference.

The Chiefs have enough of a ceiling to bring in a third pass rusher near the double-digit mark for sure. Perhaps a better bet is Tyson Jackson, who looks ready to make the leap as a well-rounded player along the line. Yet fans should expect Hali and Houston to grab a few more sacks apiece in 2013 while also watching several others like Jackson, Derrick Johnson and perhaps even Bailey grab a handful.

Your most treasured piece of Chiefs memorabilia