The team already drafted Nico Johnson and brought in Akeem Jordan to compete for the spot next to Derrick Johnson.

Share All sharing options for: Desmond Bishop released by Packers; should Chiefs pursue?

The Kansas City Chiefs have made several moves to solidify the positions of greatest need on the field this offseason as they seek to turn the corner from a league-worst two-win season. The inside linebacker slot next to incumbent starter and Pro Bowler Derrick Johnson has been a frustrating point for many fans. It seems like new general manager John Dorsey felt the same. 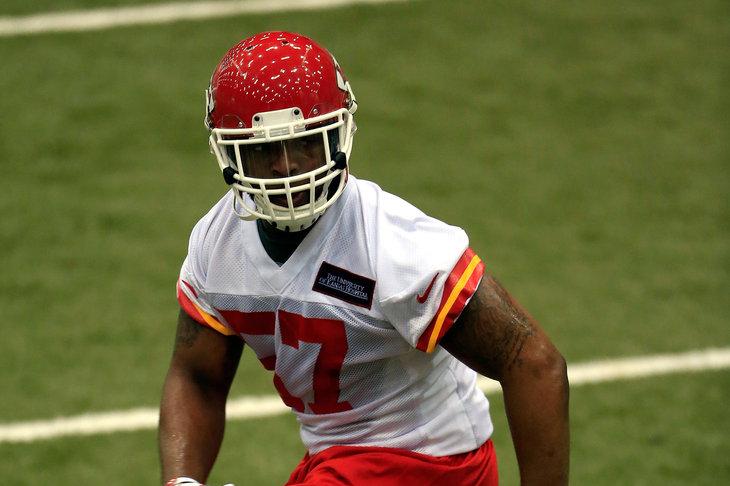 With training camp set to being in July, there are some unsettled positions on the Chiefs roster.

Thus far in the offseason, the Chiefs brought in free agent linebacker Akeem Jordan, who Andy Reid is quite familiar with after years together with the Philadelphia Eagles. Later in April, the team used a fourth round choice on Alabama product Nico Johnson. Together they provide a new platoon to compete for the starting spot next to DJ. But is that enough?

An interesting option dropped onto the market in Desmond Bishop earlier on Monday. The Green Bay Packers linebacker is noted for his great tackling ability and he could be a dynamic option in the middle for several teams with holes. However, Bishop also comes with injury concerns and wants a lot of money -- hence the reason the Packers released him.

Dorsey has Green Bay ties, so it's natural to place the Chiefs into the conversation for Bishop's services. Rotoworld made the connection and noted:

Assuming his right hamstring checks out medically -- and it was severely ruptured in last year's preseason -- Bishop would make a lot of sense reuniting with Chiefs rookie GM John Dorsey in Kansas City. A high-impact player when healthy, Bishop racked up 115 tackles, five sacks, and two forced fumbles in 13 starts in 2011, before missing all of 2012. He'd be a big upgrade on Nico Johnson and Akeem Jordan next to Derrick Johnson.

The Chiefs might have already made the moves they envisioned to plug the spot and bringing in a player like Bishop could be one too many moves for the same spot. Then again, perhaps it's worth bringing him in if the deal is right. For now, Bishop's first visit is to Minnesota who have inside linebacker issues of their own.