A former Denver Bronco says the Kansas City Chiefs made the best offseason acquisition this year.

Ah, the site of a former Denver Broncos player gushing over a move the Kansas City Chiefs made is a nice one. I don't care for Mark Schlereth very often but he sums things up nicely here.

Schlereth, speaking on ESPN, listed his top five offseason acquisitions. At the top spot was none other than one Alex Smith. 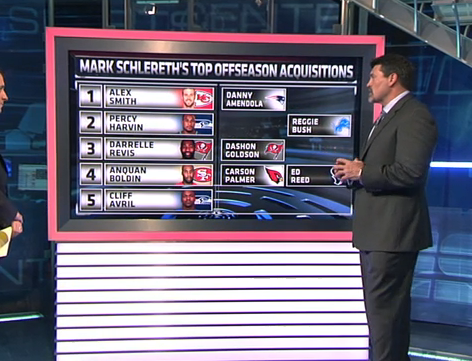 "Last but not least and a lot of people will look at this and go, "Really?" Schlereth said.

"Offensively, they have a Dwayne Bowe, They have other guys in there that can make plays for them. That to me is a great fit. They were one quarterback away from competing in that division for a playoff berth.

"So the Kansas City Chiefs with Alex Smith, and Andy Reid, another one of those acquisitions in the offseason, I really think those are great fits for Kansas City."