What can Knile Davis do for the Kansas City Chiefs?

Nobody doubts the raw ability of Davis, but will he ever be more than a footnote because of his issues?

Share All sharing options for: What can Knile Davis do for the Kansas City Chiefs?

Take a good look at the picture above, it is living proof that Knile Davis, running back/returner of the Kansas City Chiefs, can indeed hold onto the football. Davis, one of two third round picks for the Chiefs in April, has some major ability but also handles the football as if it were a grenade without a pin. This is what we call a problem.

There has been much said and written about the man, mostly because he's intriguing. Can Davis help Kansas City? Can he get his fumbling issues and health problems behind him once and for all and become the steal of this past draft, or just another washout like Dajuan Morgan and Brad Cottam?

Chiefs have plan for Knile's fumbles 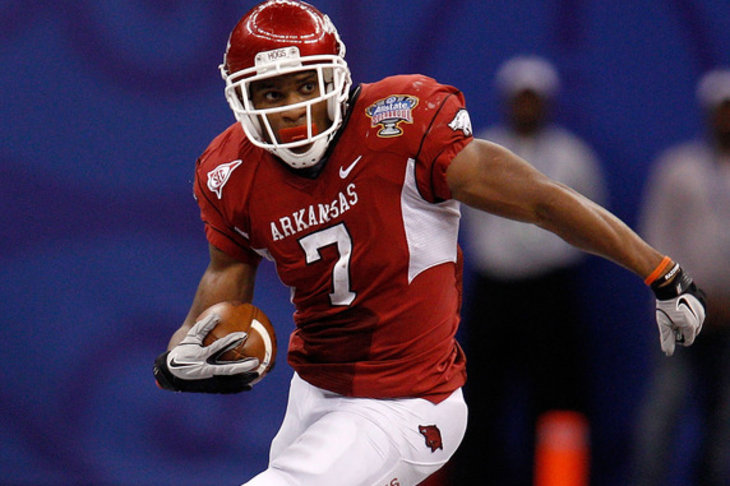 KC Chiefs GM John Dorsey explains how they looked into -- and hope to correct -- Knile Davis' fumbling issues from college.

This week, Adam Teicher of the Kansas City Star wrote a piece about the co-existence of Jamaal Charles and Davis, something which has the potential to be insanely fun to watch. It could also be the Charles Show (also very fun to watch) with Davis holding a clipboard.

At Arkansas, Davis showed he can be a dynamic game-changer. He also showed he's unreliable, whether it was because of injuries or fumbling.

Can Andy Reid get the most out of him and if so, where on the field? Does he make the biggest difference as a returner or a sidekick to Charles? Davis could prove to be a chance taken by general manager John Dorsey which didn't pan out, or a gutsy decision proven correct.

Of course, once upon a time, the Chiefs took another back in the third round who had a serious case of fumblitis. It ended up working out.

So what say you? Will Davis ever become a name to remember or another forgotten draft pick?