What does the future hold for the Kansas City Chiefs linebackers?

Currently, the most interesting thing going on with the Chiefs is whether or not anyone is going to get arrested/injured prior to training camp (knocks on wood and throws salt over shoulder). And so we turn to other things to hold our attention.

Me personally, I'm actually having fun with the NBA playoffs. As a basketball fan with no real allegiance to any team, I heart the Spurs and I'm not ashamed to admit it. I think it's mostly because of Manu Ginobili and the fact that I'm left-handed that does this to me. Take Manu's game and make it much, much less skilled/fast/jumpy/athletic and you've got me on the court. Plus, I'm one of those basketball snobs that gets all warm and fuzzy over a team playing "the right way" and all that other stuff (of course, LeBron is a robot sent from the future so it may not matter). 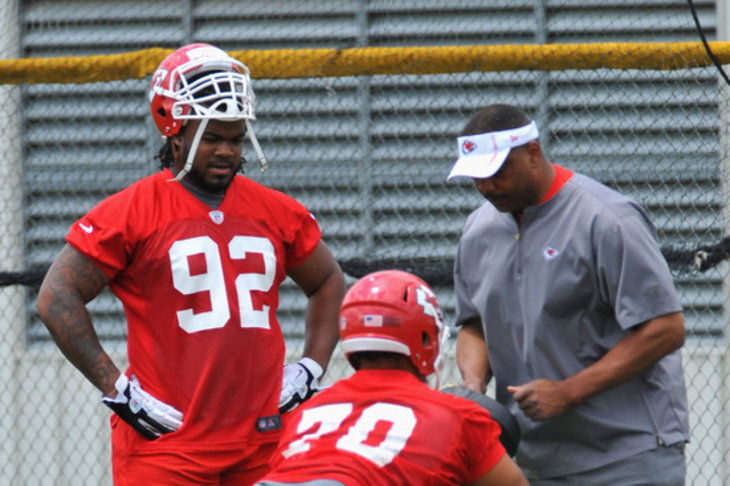 Because it's the offseason.

Call me crazy, but watching the Spurs reminds me more of a football team than a normal NBA squad. Everyone fulfills their role, no one tries to do anything they aren't supposed to, and the system succeeds when everyone plays within it because the system utilizes their talents to maximum efficiency. When things start to break down, each guy trusts his assignment and know that if HE does HIS job, everyone else will do THEIR job, and things will be all right. In other words, their team operates the way an NFL defense should.

Hey, speaking of NFL defenses (notice that super-smooth segue?), how 'bout those KC Chiefs linebackers? Last time I was making predictions that are destined to mostly fail, we talked about the defensive line. Now it's time to turn to what is arguably the Chiefs strongest overall group. Actually, forget the "arguably" part. This IS the strongest unit on the team other than RB (which is kinda, like, mostly one dude).

In that group you have

That question mark will go a long way toward determining what happens with the defense this year. Over the last few years the SILB position has been "meh." I think it would be kind to call the play we've gotten from that position even average. The guys the Chiefs have had were completely useless when teams passed on 1st / 2nd down and had to come off the field on obvious passing situations. In addition, I believe the guys the Chiefs had were overrated against the run.

Now that it's quiet again, let's make some predictions.

Prediction #1: Akeem Jordan will start at SILB unless Nico Johnson plays lights out, and will be an upgrade over what the Chiefs had at the position last year.

So far, Jordan has taken the first team snaps at SILB. From everything we're hearing this is Andy Reid giving the vet he knows the first shot to claim the position as his own. That's all well and good with me, and he may well do enough to hold the rookie at bay. From everything I've found about him from Eagles fans, he's a guy who has played decent enough. If you look at this Bleeding Green Nation article's comment section, it seemed the majority of the fans wanted him to stick around.

A second interesting thing to note from that article is that the Eagles made him a contract offer. It's not as though he was cut loose from the team without any kind of effort to retain him. They clearly wanted him around in at least a limited role, and his former coach clearly thought highly enough of him to bring him over to Kansas City and get a shot to start (of course, Andy Reid's judgment of LBs has been deemed iffy by some).

Here's another interesting article on Jordan, written in August of last year on Bleeding Green Nation. One of the biggest takeaways I got from the article is that Jordan is decent when asked to drop into coverage. I cannot stress how wonderful this would be and what an impact this could have on our defense. The Chiefs could actually do crazy things like disguise who is blitzing and who is dropping back into coverage! We could even (gasp) keep both the ILBs on the field on 3rd down! (/Faints) 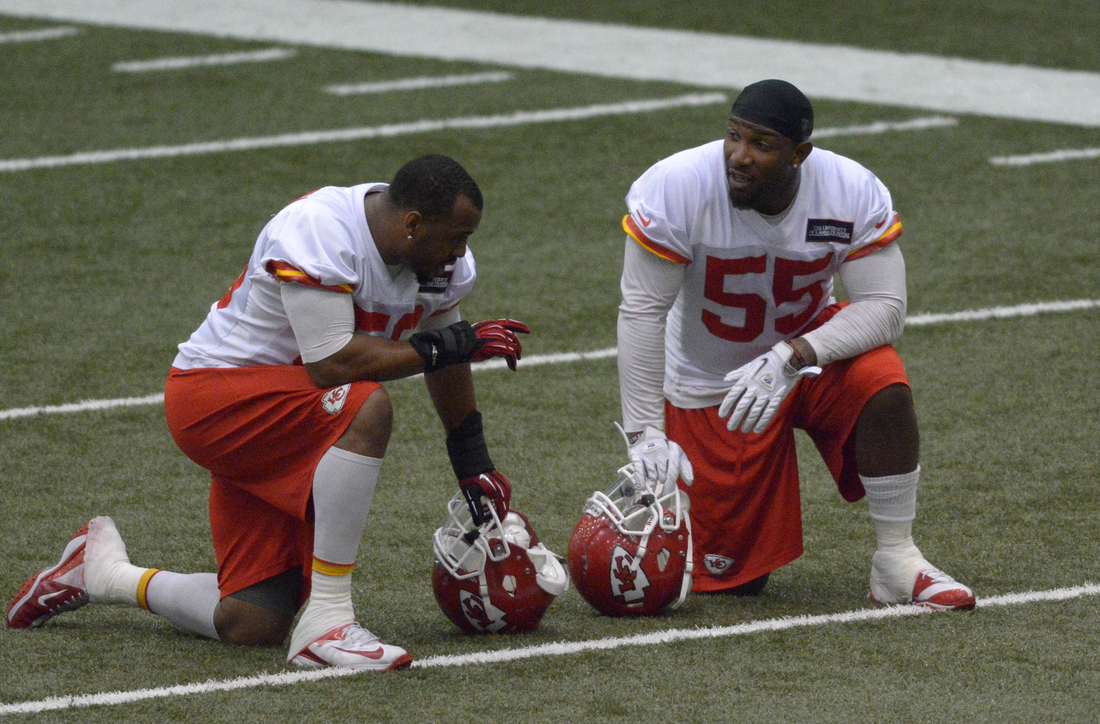 Now, the guy wasn't able to grab hold of the starting position in Philly, where the LB corps wasn't exactly lighting the world on fire. But I do think that Jordan will make us all realize just how mediocre our plays has been at SILB for the last several years. He'll be faster, a better tackler, and WAY better in coverage than what we've had.

Even if Jordan isn't able to seize the starting job, we may see a ton of him on passing downs if Nico Johnson proves unable to learn how to improve in coverage. But even if that (and special teams) are the only roles Jordan fills, it'll still be a big gain for us. We haven't had an ILB who could cover besides DJ in years.

And speaking of Nico...

I can't quite figure Nico out. He struggled in coverage at the college level but seems athletic enough to be solid in that area. He's a big, big LB who is touted as a "thumper" but at times looks a little passive on film. Some love him and think he'll supplant Jordan by the end of preseason. Others believe he's destined to be nothing but a backup.

What's that? I'm not allowed to be a complete pansy with these predictions, you say? Well, how about I make up for it with a little bolder one.

Prediction #3: By this time next year, people are talking about Justin Houston as one of the best defensive players in the NFL.

Houston is obviously already on his way after a breakout year. He made the Pro Bowl. He was named on the "top 100" list (and higher than DJ, for that matter). People are starting to talk about him. Of course when they do, it's almost exclusively as a pass rusher. We'll get to that part in a second, but I'd like to take a moment to recognize the rest of his game. 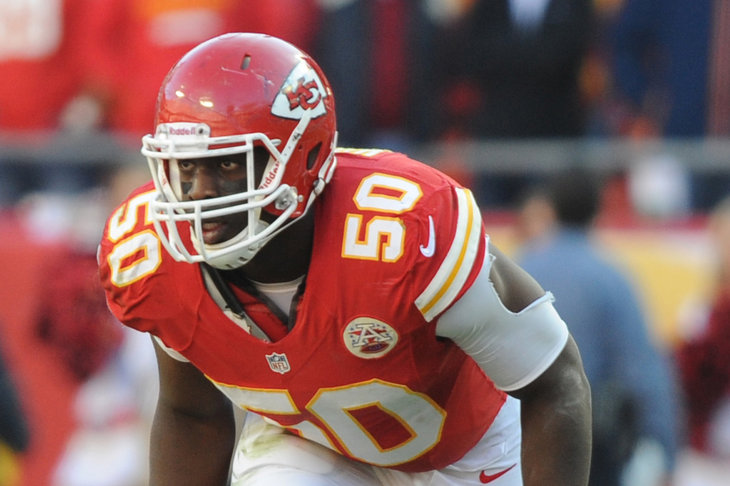 First of all, Houston is phenomenal against the run. Ever since he replaced Andy Studebaker midway through the 2011 season, that left side of the defense (consisting of Houston and my boy Tyson Jackson) has been rock solid against the run. Houston holds the line at the point of attack and knows how to string out blockers to force RBs outside. Given that he was considered a pure pass rusher when he came out of Georgia, this has been what we like to call a "pleasant surprise" (I figured I should tell you, since we see those so rarely as Chiefs fans I'm guessing none of you knew what it was called anymore).

Next, Houston has gone from "oh dear God he's as bad as Tamba" in coverage to pretty solid. He's got the athleticism (even Hali admits he's not on Houston's level as an athlete) to stick with guys in space. You almost never see that in guys as strong as him or as adept at rushing the passer. He's a wonderful three-down player who can do it all.

Generally, guys who are jacks of all trades at OLB aren't appreciated (even though they have a huge impact on games). Unless, of course, they're terrorizing the passer. Which Houston is more than capable of doing. Last year Houston had 10 sacks, 7 hits, and 27 hurries against opposing quarterbacks. All very solid.

But what makes those pass rushing stats even more impressive (and terrifying for opposing offenses) is the fact that Houston collected them in 352 snaps rushing the passer. For a comparison, Cameron Wake rushed the passer 558 times last year. DeMarcus Ware did it 454 times. Aldon Smith did it 538 times. Tamba Hali did it 405 times. I think the point has been made.

Basically, Houston had no business doing the things he did last year. And he did them anyway.

One final aspect that makes Houston's pass rushing so impressive is the fact that offenses almost never HAD to pass against the Chiefs. They were never trying to come from behind, but were rather holding onto leads (usually huge leads... sigh...). So the option of whether to run or pass was always available. Basically, Houston had no business doing the things he did last year. And he did them anyway.

Unless Bob Sutton is insane, we'll be seeing more of Houston rushing the passer this year. 13-16 sacks (as well as a big increase in hits/hurries) will not surprise me in the least. And all the while Houston will continue being Houston against the run. And the more people learn his name because of the sacks, the more exposure his strong overall game will get. 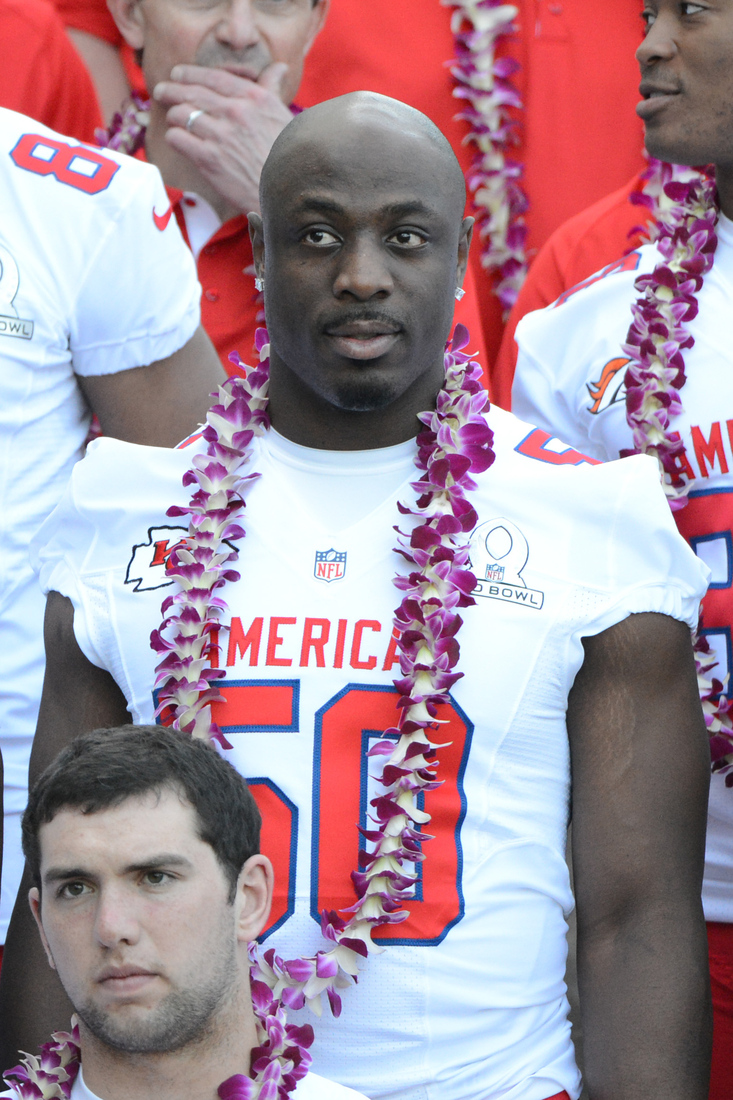 Prediction #4: Tamba Hali will do what he does and NOT "continue to slide" as some claim.

For Tamba, 2012 was a pretty "meh" year. After a couple seasons in a row of double digit sack numbers, Tamba fell back to nine sacks. Additionally, it seemed to many (myself included) didn't feel his presence on the field quite as much as in recent years.

All this has lead to some speculating that Hali has peaked and is starting to decline. And to be honest, that theory makes sense in some respects. He's going to be 30 in November, and that's always an age to watch when it comes to athletic skills. Hali was never a great athlete, so the theory goes that ANY loss in athleticism will do him in. Some have predicted that last year was a harbinger for things to come.

The demise of Tambahawk has been greatly exaggerated.

Me? I think Hali fell victim to a lot of the same stuff that plagued Houston this last year. The Chiefs were never playing with a lead and forcing teams to pass. When teams DID pass, it was in comfortable situations where there was no need to force the action and take risks (which would lead to more sack opportunities). The demise of Tambahawk has been greatly exaggerated.

On that note, is anyone else a little down on the nickname "Tambahawk?" Is there some special significance of the hawk to Tamba, or is it just a play on tomahawk? Because honestly... I can't think of a celebration I find less capable of psyching me up than the whole "bird flap" thing. I wouldn't hate it if he changed it to something more intimidating... remember Amon Gordon's "tree chopping" celebration after he sacked Big Ben? Now THAT'S a sack celebration. I vote that Tamba change his celebration to that.

OR... play off the time he had blood all over the front of his uni and go with "The Zombie" as a nickname. The celebration could be pretending to eat the entrails of every QB he sacks. Who wouldn't love that? Plus, it's a clever way to refer to Hali being the most relentless pass rusher in the league. All in favor?

(Man, zombies won't stop getting into my column somehow) 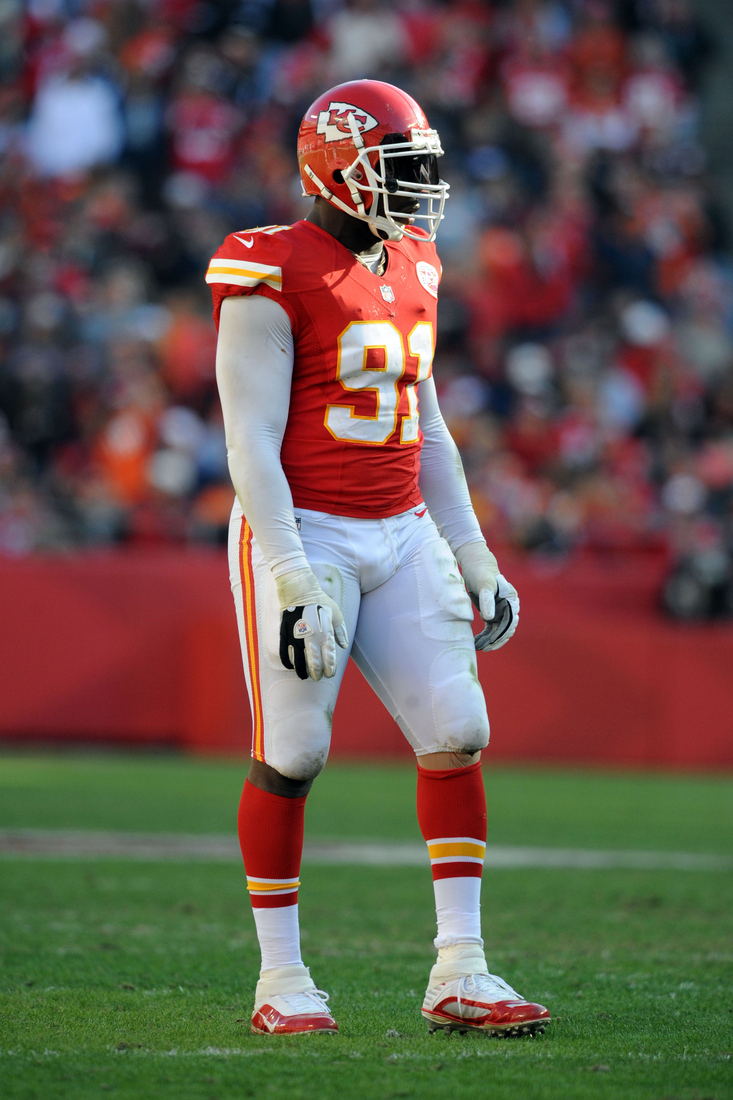 Prediction #5: Zombies will soon flood the earth and devour everyone you've ever lov....

(Email me mailbag questions at MNchiefsfan@hotmail.com, or tweet to @RealMNchiefsfan)

The best eBay has to offer

43 things to remember from the offseason

Chiefs tickets go on sale in a few weeks