If you ask Chiefs rookies Travis Kelce and Tyler Bray, the mental side of life in the pros is the most difficult adjustment.

Share All sharing options for: Chiefs rookies say mental side is biggest adjustment to life in the NFL

Each year, the offseason process brings in a crop of new rookies via the draft and free agency who must acclimate to life at the pro level. It's a learning curve that swallows everyone, from college All-American to role players, and the pressure comes in two parts -- the physical side and the mental side. Based on responses from Kansas City Chiefs rookies Tyler Bray and Travis Kelce, it's the mental part that's the bigger hurdle thus far.

Speaking at Chiefs practice on Thursday, both players noted the difficulties in picking up a new playbook, terminology and methods. Bray, an undrafted free agent quarterback who has a good chance to stick, says he's just soaking everything up even when he's not taking reps on the field. 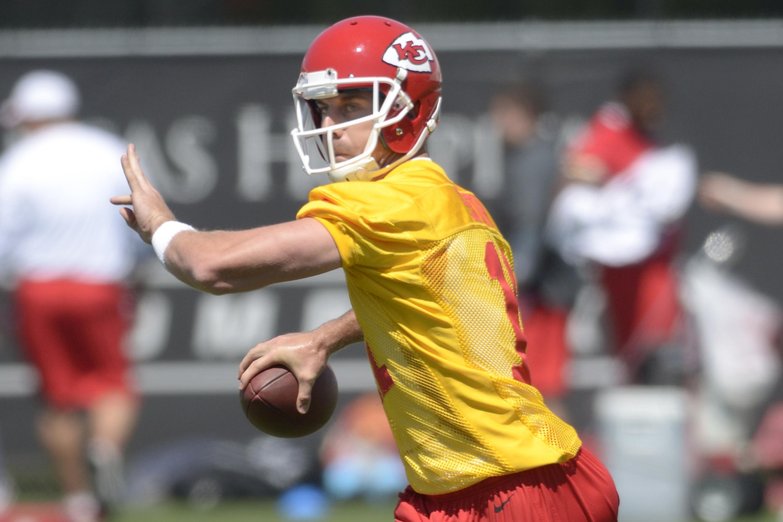 The Chiefs offense got rolling while Jonathan Baldwin got sick.

"The first couple days were a little different," Bray said. "You come in being the starter [in college] and have to sit there and take mental reps, kind of took me back to my freshman year."

Bray did say that the veterans on the roster like Alex Smith, Chase Daniel and Ricky Stanzi have taken him in and helped him make the transition a bit easier.

"They've helped out a lot," Bray said. "They're great guys. They know I'm going to come in and struggle at first with the playbook, it's a new system, a new type of offense. They've just helped out a lot."

Kelce, the first of the Chiefs' two third-round selections, agreed with Bray that the mental side is the most difficult adjustment.

"Oh, by far. By far," he said. "Don't get me wrong, everybody's out here working their tail off trying to get better, but at the same time, everyone's still learning all the schemes and plays and things like that. It's definitely been fun."

For Kelce, the adjustments will include learning multiple positions within head coach Andy Reid's offensive schemes. The former Cincinnati tight end is a valuable and versatile offensive weapon, but first he must learn where and when to be on the field.

While there's much to learn, Kelce is also realistic in his approach. It's a gauntlet every incoming player must go through if they are to be successful and it just takes the time and effort to get there.

You can only expect so much," said Kelce. "It's been fun though. It's been adventurous. Just getting the entire offense down has been rough, but I'm coming around and I'm starting to get everything. So far so good."