Where will Branden Albert and Eric Fisher play in 2013? On the left and right side respectively, according to Andy Reid. That's if Albert is on the roster.

IF Brandeen Albert is a Kansas City Chiefs in 2013, he'll be the left tackle and No. 1 pick Eric Fisher will play right tackle. This according to KC Chiefs head coach Andy Reid who spoke with Bruce Murray and Rich Gannon of SiriusXM NFL Radio on Thursday. Reid's words hardly sounded convincing, offering the same story he did at the draft about drafting Shawn Andrews as a tackle while in Philly and playing him at guard for a while, indicating he doesn't care who plays what position.

5 reasons to do a deal with Albert 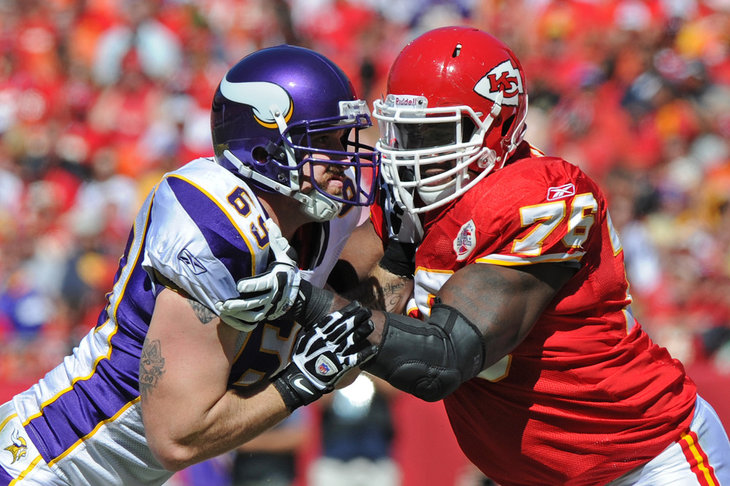 By signing Albert, it's solving another piece of the puzzle. Kansas City is trying to win its first playoff game since 1993, and needs all the good players it can get. Albert is a good player and someone who can lead the way for some of the young pups on the line. Keeping him should show the other players that the Chiefs brass isn't looking toward a rebuild or anything of that nature. It shows they have the best possible roster on the field at the start of training camp, as they look to compete for the playoffs.

"We allowed Albert's people to talk and look and do that whole thing and it didn't work out one way or the other," Reid said. "And so, you never know, I mean, in this business you'd love to say that he'd be here or not be here, one of the two, but I know he's a good kid, I know he's a hard worker and I know he's a good left tackle. So that gives us a whole lot of flexibility and if he was here today he would be the left tackle. And then we go from there and we just see what happens down the road."

Yeah, not exactly convincing. I remain on the side that Albert will be traded before the 2013 season or exit via free agency after the 2013 season. Teams generally don't openly discuss trading a player and then turn around and sign said player to a multi-year deal. I just can't make that leap right now.

Remember what matters here is the Chiefs actions. Historically we've learned coach's words don't always matter. But actions do. And the next action that we can see is next week at rookie minicamp. Where Fisher lines up will tell us a little bit about where the Chiefs think he'll be playing in 2013.

H/T ChiefDJ in the FanShots

Full coverage of the Arenas trade