The Chiefs starting quarterback had nice words for his targets, including a surprise given a chance to shine while DMC is on the shelf.

The Kansas City Chiefs have another day of OTA practice in the books, and Alex Smith feels good about the system and players around him so far. The Chiefs quarterback spoke with the media after Wednesday's practice and spoke glowingly of the early returns.

Chris Ault has been brought in as a consultant of sorts to help the Chiefs staff, and Smith said the team is getting a much better idea of the pistol offense that Ault is known for.

"Yeah, we're getting a lot of questions answered, that's for sure," he said. "It's great to have him here, obviously. A guy with that kind of knowledge is great to have around the building. I'm making the most of it." 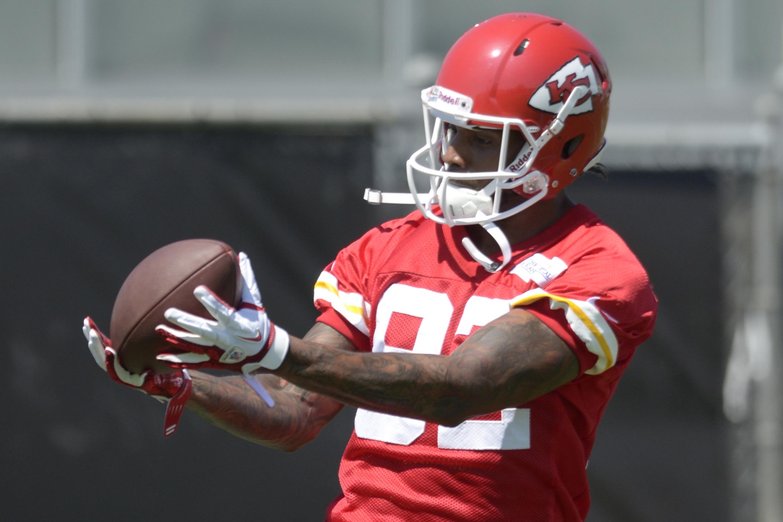 Dwayne Bowe sits, Brandon Flowers is sick and Knile Davis says his fumbling days are over.

As far as his targets, Smith is getting to know targets like Dwayne Bowe and Jonathan Baldwin. Bowe is the obvious leader of the offense and sat out for a bit on Wednesday with a leg cramp. Baldwin is more promise than production to date, but the former first-round pick still brings hopes for another solid receiver opposite Bowe. Smith says both have been performing well.

"They're doing a great job," he said. "Everybody across the board is putting in a lot of work and those two guys, especially working with the first unit. We're getting a lot thrown at us and those guys are making a lot of adjustments. They're two big targets, really big targets. Dwayne is a really special player. You can see it out here making plays. Anything near him he seems to come down with. That's what you like as a quarterback, but those guys are doing a great job."

With Dexter McCluster continuing to sit and nurse a hamstring injury, a surprise receiver was mentioned today in the media session: Junior Hemingway. As a former seventh round pick from the previous regime under Scott Pioli, Hemingway was a decent bet to fight for a roster spot. Instead, it sounds as if John Dorsey and company might appreciate the late round flyer taken on the former Michigan product. Hemingway is definitely taking advantage of the opportunities in front of him this spring.

"I think [Hemingway's] doing a great job," said Smith. "He's had a little window here where he's getting a little more opportunities because Dex hasn't been out here the last couple days. He's gotten a lot of work and really making the most of it. He's a guy we're really moving around a lot. He's gotten good work."

Hemingway appeared in only one game last season for the Chiefs and failed to register any statistics.