The Kansas City Chiefs offensive line is important so we will be paying extra attention to that throughout the offseason.

It appears that four spots along the Kansas City Chiefs offensive line are set or pretty close to it. The bookend tackles will be Branden Albert on the left side and Eric Fisher on the right side. At center is Rodney Hudson and at right guard is Jon Asamoah. That leaves one spot remaining, and three players are vying for it.

Jeff Allen and Geoff Schwartz are two known players competing for that spot. It's unclear at the moment who is leading the pack but Allen did run with the ones in the Chiefs first set of OTAs. 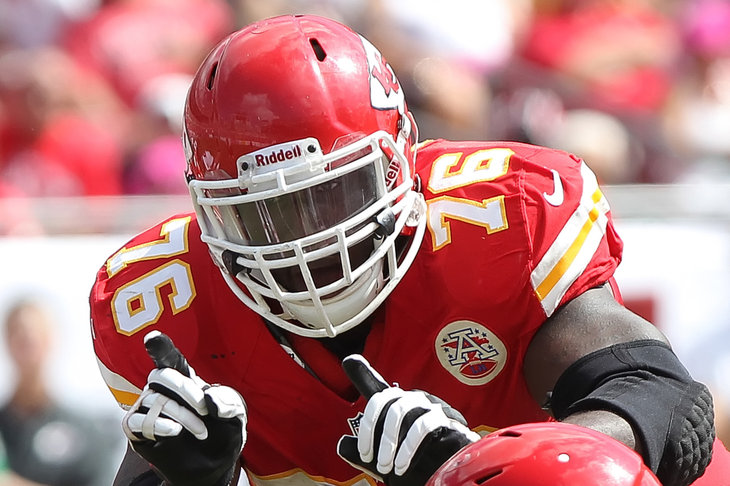 Few offensive lines in the NFL can match the one the Chiefs have to offer.

One other player is involved in this competition: Donald Stephenson. The Chiefs second year player was a tackle in year one, backing up both sides of the line. This year he can add guard to the mix as Stephenson has been seeing some time along the interior.

"I'm working a lot of different positions - left, right guard, tackle," Stephenson said last week, via comments sent out by the Chiefs. "Right now I'm trying to learn everything. It's going to feel good once I get everything down. That means I know what everybody is doing at all times."

Not only is Stephenson just a second year player, he's being asked to learn multiple positions. Stephenson says it's difficult because of the complexity of the Chiefs offense.

"Trying to learn guard at the same time can be tough," Stephenson said. "That's what OTAs are for."

So from what I can tell, there is one open competition along the line and three players -- Allen, Schwartz and Stephenson -- are hoping for playing time there.

Pick one player from Chiefs history

An ode to DJ