Nothing in sports is more fun, and polarizing, than a good debate. This one is no exception. Who would you take on the Chiefs today from the franchise's past?

Share All sharing options for: Picking a Kansas City Chief from history

Sometimes sports are very serious business, both for players and fans alike. Of course on this site, sports is the main hub of life, taking time away from our daily routine of work, family and chores (but mostly just work).

The other day while driving I got to thinking about the Kansas City Chiefs, having some scenarios play out in my head about the upcoming season. At one point I thought, wouldn't it be great to go back in time and pluck a great Chiefs player from the past and put him on the current team in his prime?

If you could take any Chief from history, and put him on today's team, who would it be?

Well, that question is the subject of this column. If you could do exactly that, what player would you choose and why?

Despite only winning one Super Bowl all the way back in 1969, Kansas City has had its share of terrific players.

Currently, six men who were predominantly Chiefs are in the Hall-of-Fame, with Tony Gonzalez coming in the near future. Five of them come from the defensive side of the ball in Willie Lanier, Bobby Bell, Buck Buchanan, Emmitt Thomas and Derrick Thomas. Only Mr. Len Dawson was on the other side of the lines.

Looking at the Chiefs current-day squad, there are obvious weaknesses at wide receiver, inside linebacker, safety and the defensive line. Quarterback can be upgraded as well, but that of course is a raging debate with no end in sight.

Personally, I would take someone who didn't make the Hall-of-Fame but should have.

Give me Otis Taylor. 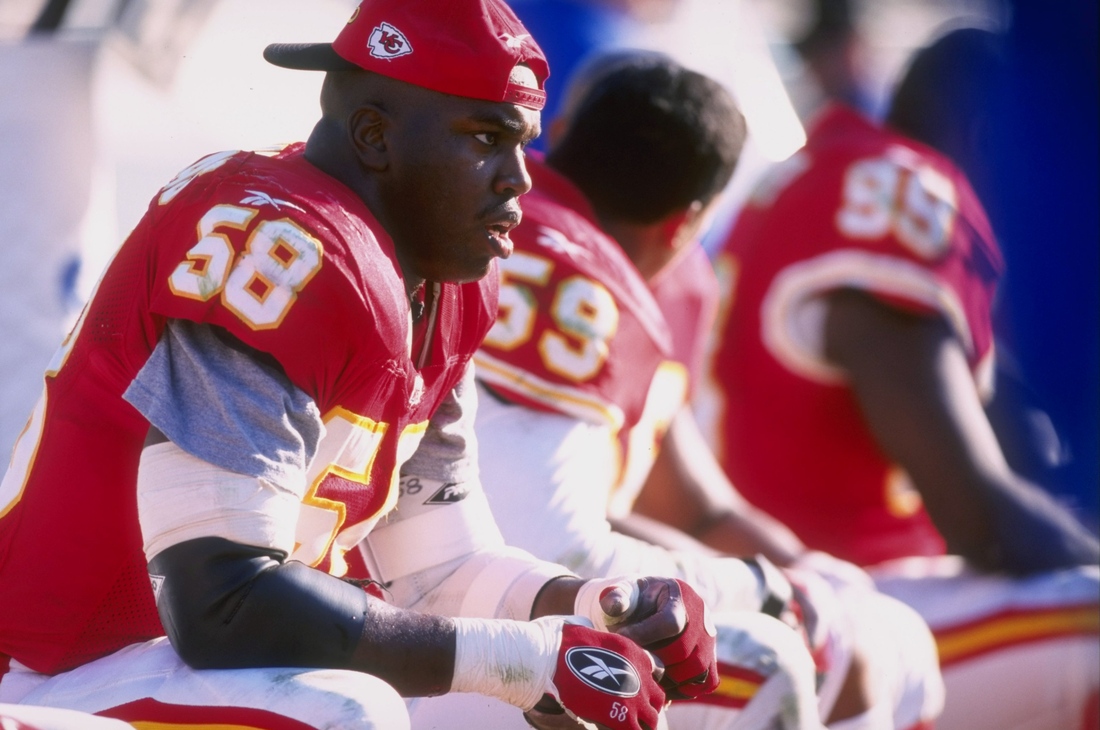 Taylor was one of the premier receivers in his day, a large man for even today's standards at 6'3'' and 215 pounds. Alongside Lance Alworth of the San Diego Chargers, Don Maynard if the New York Jets and Fred Biletnikoff of the Oakland Raiders, Taylor was in an elite class who dominated his position.

Looking at his numbers in the correct context, Taylor's greatness can't be understated. The main target of Dawson for the duration of his career, Taylor amassed two seasons of 1,000+ receiving yards and two others of more than 820 on a team that was considered a running team, even for a time when running was the norm.

In 10 seasons (Taylor actually played in 11, but 1975, his last, only consisted of one game before he was traded to the Houston Oilers. He refused to play for another team and retired.) Taylor caught 57 touchdowns, including 11 in 1967, a career-high.

In the championship season of 1969, Taylor came up big in the Super Bowl. He snatched up six passes for 81 yards, including the 46-yard touchdown that has become part of Chiefs lore.

If Taylor was put in today's game with Dwayne Bowe opposite him, Kansas City would have the best tandem of receivers in the NFL. Taylor was a true superstar in his day, evidenced by the fact he averaged 17.8 yards per reception.

How incredible is that? Calvin Johnson has never averaged that in a single season. Biletnikoff and Jerry Rice only did it once. Taylor eclipsed the mark of 20.0 yards per reception twice, including a dumbfounding 22.4 in 1967.

Give me Otis Taylor. Who do you have?

Video from the Chiefs final practice this week

Moeaki out til training camp