Kansas City Chiefs defense is 'aggressive' and 'attacking', according to players

What are the KC Chiefs saying about their own defense? We have the round-up.

Share All sharing options for: Kansas City Chiefs defense is 'aggressive' and 'attacking', according to players

The Kansas City Star quoted Tamba Hali as saying about this year's defense: "From cornerbacks to safeties to linebackers, we're coming."

To which I responded ... my goodness, is it football season yet?

Hali talked to the Star about what he and Justin Houston can do this year and like many others in May it was all extremely positive and optimistic. Hali's not the only one talking about the Chiefs aggressive and attacking defense. I rounded up a few quotes from Chiefs players over the last week and a half or so on what this defense will look like. 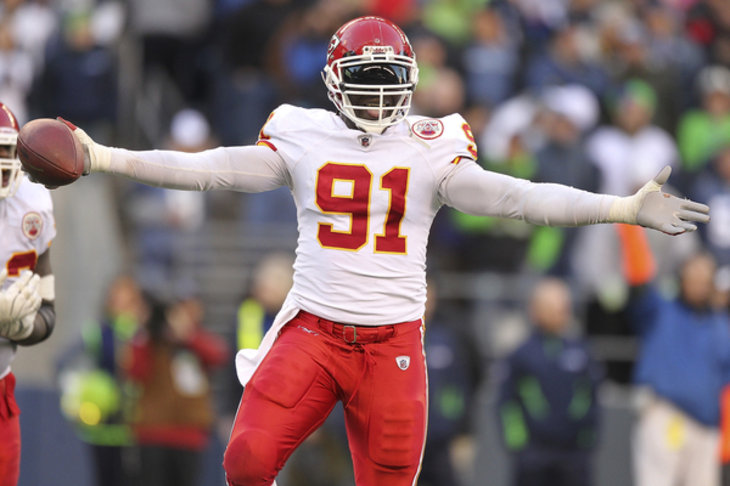 That's also one of those terms that is thrown around this time of year by every single defensive coordinator. Some are proven right when the season rolls around and some are just talkers.

Derrick Johnson: "It's an aggressive, attack-style defense. I love it. Doing a lot of different things as far as blitzing, covering different receivers, covering tight ends at times. It's a new scheme, everybody has their thinking caps on right now during camp and OTAs. But I think it's going good for us right now.

Tamba Hali: "Yeah, these guys came from systems where they attacked. Nothing against our old system, but there wasn't attacking. They're actually looking forward to this defense because they get to attack and shoot gaps and push guys back and make plays."

Justin Houston "Some of the calls, and the way our big guys play up front. They're attacking more instead of reading."

Tyson Jackson: "Yeah, [the defense is] pretty different because like I said, we're doing a whole lot more moving now, so we just have to understand that we'll be flip-flopping from right side to left side and trying to understand what's our gap responsibility and what's being asked of us on each play."

Andy Reid: "That's been [Bob Sutton's] MO. I know when he was at the Jets - he'd been there a long time - and we had the chance to play them a few times when I was at Philly. I understand that defense. I know the confusion it can present to offenses. He has good players to do it with. He's getting his plan in place."

For real though, how many days til football season?

Which player can the Chiefs not afford to lose?