When there's a player-for-player swap for two players that were on the roster bubble to begin with, does anyone really win?

As you all know the KC Chiefs traded cornerback Javier Arenas to the Arizona Cardinals for fullback Anthony Sherman and at first glance the deal -- a fullback for a cornerback -- seems to favor the Cards. The thinking is that Arenas, a regular contributor for the Chiefs, will have a bigger impact in Arizona than Sherman will have in Kansas City. I haven't seen enough of Andy Reid's offense, and how he uses fullbacks, to have a strong opinion on this yet. As many of you know I didn't think Arenas was a lock to make the roster given the Chiefs free agent additions.

Still, most Chiefs fans are against this move. That was evident in Wednesday's Arenas trade approval poll: 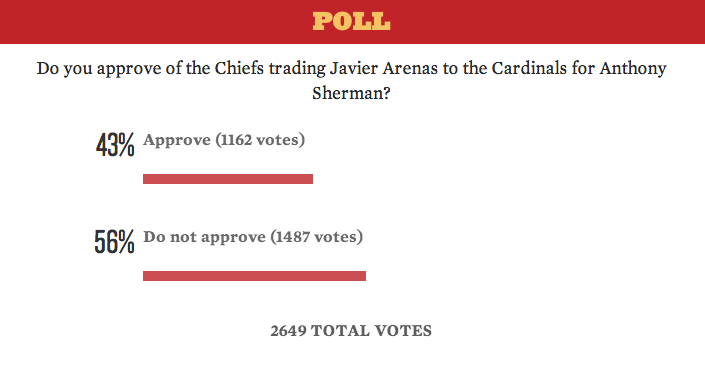 I took a peep over at Revenge Of The Birds, SB Nation's Cardinals blog, and most fans are sad to see Sherman go, which is a good sign for the Chiefs. See what other Cards fans at ROTB were saying about the trade:

bigredhalfCentury: I love Sherman, though. I wrote many weeks ago that in his own way, he was probably the best offensive back on the Cardinal team last season.

RedC: Sherman's awesome. One of my favorite Cardinals. He's a beast on special teams and blocks pretty well both in the run and pass game. Don't think I've ever seen him drop a pass, though they didn't throw to him too often. Moves well in space for a fullback but he's not a hybrid/receiving type. Going to miss him. Our lack of a run-game was all on the backs and offensive line. I'm pretty upset all we got was an average slot corner who won't crack our punt return lineup.

Cmncinaz: Reid is usually the one doing the hosing but I think folks are wise to his tricks now. Looks like the draft and Brandon Albert thing has backfired on him some too.

Chiefs fans react to the trade 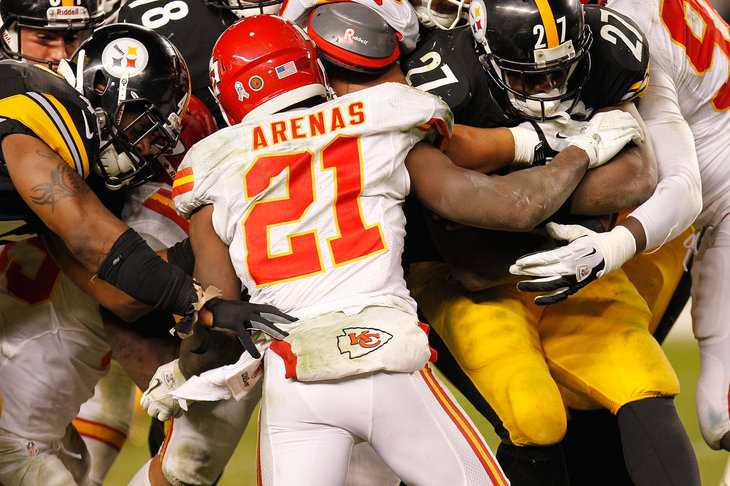 Arenas was the draft pick used in the Tony Gonzalez trade, which has made for some interesting reactions from Chiefs fans.

Jesse Reynolds: I could see how you're down on a FB. But the guy was a captain and an ace special teams player. Also his impact in the run game isn't a true measurement of his ability because the Cards had two rookie tackles, a backup center, both starting RBs and the starting QB out. Hard to run block against a stacked box with backups in front of you.

Azusa-PacifiCardinal: You guys are lucky to have the Shermanator. Like RedC said, our run/pass issues were on the OLine, not Sherman. He was a beast as a blocker and on special teams and is a great, hard-working, up-tempo player. I'm going to miss him. I feel like KC got the better end of the deal because Sherman will definitely make their team, whereas we have a logjam at CB. Peterson and Methieu aren't going anywhere and Arenas has to beat out some combination of Powers, Cason, Flemming, Bethel, and McCann (I have no idea how many CBs we'll keep on the roster) just to make the team. Be good to Sherman. May he level many linebackers for you!

Sherman has to be one if the top FBs in the league.

Scuba_Steve: Sherman has to be one if the top FBs in the league. Chiefs got an awesome player that can take lead FB position

proslaws: Meh. I guess it makes sense, on some level. I think we'd largely addressed our CB needs already, but the handwriting was kind of on the wall for Sherman. I actually loved his ferocity and work-ethic at that position, but the position just wasn't going to see much utility in the Arians/Moore offensive system.