The Kansas City Chiefs wrapped up day three of OTAs this week, which signals the end of their practice week. The Chiefs will pick it back up from May 21-23 with another set of OTAs. See the complete OTA schedule here. And read on for updates from Thursday's practice.

...But it was just a cramp. No big deal. "He had a little bit of a cramp," Andy Reid said after practice (comments via the Chiefs). "He's OK."

The Chiefs haven't had any big injury scares this offseason. The Chargers lost their 2012 first round pick, Melvin Ingram, to an ACL tear just this week. Cross your fingers.

Whoever was in charge of the playlist was told to be creative. Here's what they came up with:

#Chiefs coach Reid had music blaring during practice today. Playlist: Welcome to the Jungle, Thunderstruck, All the Way Turnt Up (cont)

Playlist (cont): Enter Sandman, Cowboy. Reid says he didn't pick the music, but asked staff in charge of it to be creative.

"It's just to liven it up a little bit," Reid said. "I wanted to make sure you guys were out here dancing."

What Dorsey said about Baldwin 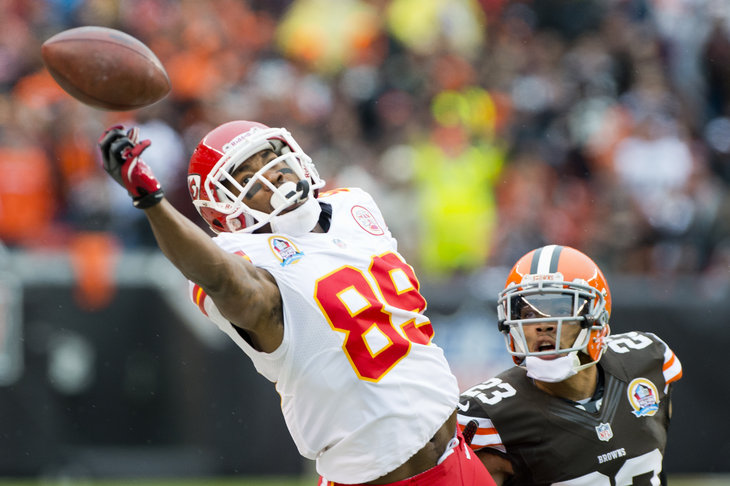 "He has really nice size, very good hands. He's one of those guys who could possibly be an inside matchup as a slot receiver, a larger target."

When the local paper writes that the "signature moment" for your receiver thus far this offseason is getting chewed out by the coach, you're going to get a lot of questions about said receiver.

Get used to it, Big Red. There are going to be a lot of Jon Baldwin questions.

"He's done some good things," Reid said. "He had some good catches today. He's working hard. He's working on the little things, and that will help him down the road here."

"I know what he's doing now. He's working hard at that. He's a big man, so there is a certain way you need to play when you're big. He's doing that. He's getting better at it."

Just don't always expect to get much value out of what Reid has to say.

The Chiefs vets welcomed the rookies

"They have welcomed all the rookies in, free agents, whatever, with open arms," Chiefs fourth round pick Nico Johnson said. "They haven't tried to down talk you or anything like that, they just always try to keep you motivated.

"Derrick [Johnson] tells me all the time that he's been in that situation before, so he's just trying to keep me and the other linebackers motivated to get better every day and understand you're going to make mistakes and just keep moving forward and get ready for camp."

DJ is apparently taking Nico under his wing.

"He was really the first player out of the Chiefs roster to hit me up on Twitter and tell me congratulations and it's just time to get to work," Nico said. "I felt that as motivation to want to go out and do my best and show him that I'm willing to work to earn whatever I'm given."

Quick, name a better veteran to have working with you than DJ. Can you do it?

"Poe, he reminds me of Kris Jenkins," Mike DeVito said, "just so big and so athletic. When he puts his hand down and gets going there's just no stopping him."

Interesting. They're both big dudes. I hope Poe ends up playing like Jenkins, who was terrific at times. It starts up front.

I'm a big believer that the front of the defense helps the back end. Chain reaction that starts up front.

This is the final day of OTAs this week.

Eric Berry said this is his 5th defensive coordinator since college. Dang.

Rodney Hudson said he is totally cleared to play.

Knile Davis wasn't at practice. He was at the NFLPA rookie premiere in L.A. SB Nation's Ryan Van Bibber is there, too. Follow him at @JustRVB.